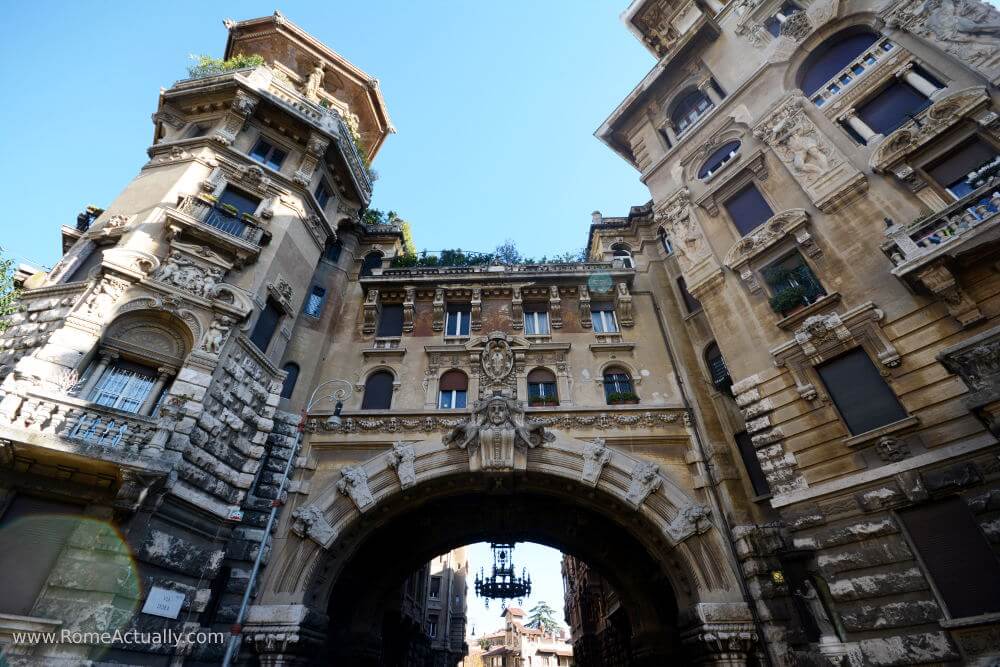 So popular among tourists from all over the world that finding some hidden gems in Rome is becoming harder by the day. Hard but not impossible.

Of course, places that once were considered strongholds of “secret Rome” are now not so secret anymore. Guides from many travel outlets, mainstream and less mainstream, will very likely tell you to go and admire St. Peter’s cupola from the keyhole on the door of the Knights of Malta headquarters, or the nearby Garden of the Oranges, or even the Vatican Gardens. Maybe these were unique things to do in Rome a couple of years ago, but hardly now.

Lovers of offbeat travel, fret not, you landed in the very right spot to discover unusual places to visit in Rome. Get ready to enjoy the Eternal City just like a local.

Visit Quartiere Coppedè to see an unusual side of Rome

Among the most unusual places to visit in Rome, the first place goes to Quartiere Coppedé. Located in Rome’s Trieste neighbourhood, this semi-hidden enclave designed by architect Gino Coppedè turns around Piazza Mincio and its quirky Fountain of the Frogs. Built from 1913 and 1926, you will see a series of buildings Liberty-style adorned with grotesque figures of monsters, animals and the elements of Greek, Baroque, Gothic and medieval arts.

After visiting and photographing this quaint and unusual corner of Rome, don’t rush back to the city centre of the guidebooks. In this area, you can stop for lunch to exclusive eateries like one of my favourite vegetarian restaurants r the new Viking place Smor. You can also go shopping in one of the shops and department stores or visit the historical sites and museums in the area.

READ MORE: Wondering where to eat in Rome? Check out our eBook Tasting Rome by Neighbourhood to discover the best restaurants for adventurous foodies in five district

Even though centrally located, Baroque-style Palazzo Barberini is quite of an under-the-radar Rome attraction. Reachable with an easy 100-meter stroll from Barberini metro station, its entrance is in Via delle Quattro Fontane.

Designed by three of Italy’s greatest Baroque artists, Carlo Maderno, Gian Lorenzo Bernini and Francesco Borromini, inside you can visit masterpieces such as the wonderful fresco by Pietro da Cortona and famous paintings such as Raphael’s La Fornarina, Caravaggio’s Judith Beheading Holofernes, and what, until not long ago, was believed to be Guido Reni’s portrait of Beatrice Cenci, the Roman patrician executed by beheading in the 16th century with the accusation of parricide.

Open to the public is also part of the private residence of the Barberini family that lived here until 1955.

Reach the Appian Way to walk Rome off the beaten path

Known as the queen of all roads, the Appian Way goes all the way to the southern Italian Puglia region (Apulia). Even though crucial for the bygone life of imperial times, now it falls into the category of the unique things to do in Rome.

I can’t really say exactly what to visit along the Appian Way as it’s a huge road. Some of the highlights are the Catacombs of St. Callixtus, St. Sebastian and St. Domitilla, the Caffarella Park, the Tomb of Caecilia Metella and some well-preserved Roman aqueducts. Buses in this area are pretty seldom and timetables unreliable, so I definitely recommend a guided tour to explore the Appian Way.

Villa Ada and its catacombs

Formerly the residence of Italy’s royal family, the Savoys, Villa Ada is now one of Rome’s largest public parks. Here there are countless activities you can do. For a bit of exercising you can walk, jog or rent a bike, but if you want to simply relax, you can set up a picnic and enjoy your lunch surrounded by green.

There is also a little dog space where owners bring their hairy friends to swim in the little lake devoted to them, play around, run and get tired.

Apart from being a great place to spend some time in nature, Villa Ada is also packed with historical sites. First and foremost, there are several catacombs, the cemeteries of early Christians, before Christianity was recognised as a religion and the persecution of its followers was forbidden.

Some of the best you can visit in Villa Ada are the Catacombs of Priscilla, with the entrance from the cloister of the Sisters of Priscilla in Via Salaria 430 (more info on the official website www.catacombepriscilla.com/index_en.html).

Recently open to the public are also the air-raid shelters of the Savoy royal family.

Galleria Sciarra is a passageway roughly connecting Via del Corso with Fontana di Trevi. With the end of the Italian Risorgimento series of battles that resulted in the Italian unification and Rome due to become the young country’s capital, a frenzy of building and restoration began. Noble and powerful families started to spruce up their palaces in an outburst of enthusiasm in wanting to give the city the look worthy of a capital. The paintings that make this covered passageway so beautiful and deserving of a stop are by Giuseppe Cellini and feature an all-around celebration of the woman as queen of the house, mother and worker.

Counting almost 3,000 years under its belt, sightseeing Rome doesn’t only imply travelling back to BC times. Get off at Porta Furba/Quadraro station on the metro line A and you will find yourself immersed in the burst of colours of the Quadraro street art.

Artists of the likes of Diavù (native from the area and founder of this street art project), Alice Pasquini, Beau Stanton, Dilkabear, Zelda Bomba and Gio Pistone have taken part in this project and managed to revamp this otherwise pretty uneventful neighbourhood that never really attracted visitors.

Now, it not only attracts visitors but also photographers and guided tours. I have been there many times and always like to go back and take more pictures from previously neglected angles.

Often neglected and overshadowed by the most famous Santa Maria in Trastevere, Santa Cecilia in Trastevere Basilica is located in its semi-hidden namesake piazza and one of the places to visit in Trastevere. Quite unassumingly from outside, the interior is finely decorated and bears the final resting place of Santa Cecilia, the saint patron of music, whose body was translated here from the previous tomb in the Catacombs of St. Callixtus.

After visiting the street-level basilica, don’t forget to go down one level and visit the luxurious crypt and then down again for an ancient Roman Domus and insula. Apart from being one of the least visited churches in Rome, it’s incredibly fascinating to see streets and buildings from imperial times.

Villa Torlonia and Mussolini’s bunker, one of the unique places to visit in Rome

More of a locals’ place rather than a tourist area, Villa Torlonia park was once the residence of Fascist leader Benito Mussolini.

Enjoy a stroll in this lovely park located some 2 km from Porta Pia, visit the Liberty-style Casina delle Civette, or House of the Owls, have a bite at La Limonaia bar/restaurant (Via Lazzaro Spallanzani 1A, inside Villa Torlonia, +39 06 95065250) and let your kids play at the local playground Technotown, a space devoted to the new technologies.

Also called Porta Alchemica (Alchemical) or Porta dei Cieli (of the Skies), this is definitely one of the secret places in Rome. And one of the most mysterious, I would add.

Located in the gardens of Piazza Vittorio on Esquilino Hill, this strange structure was built between 1655 and 1680 by marquis Massimiliano Savelli Palombara inside his once residence, Villa Palombara, where today are the gardens. The nobleman got close to the world of alchemy and science as an aftermath of frequenting the palace of Queen Christina of Sweden who had a well-equipped lab managed by alchemist Pietro Antonio Bandiera.

According to the myth, the alchemist Francesco Giuseppe Borri stayed over Villa Palombara for one night in the quest for a magic herb able to produce gold. The morning, he was seen stepping over the door and disappear. In the process, he left behind some speck of gold result of an alchemic formula and a paper filled with symbols that revealed the secret of the philosopher’s stone. Those symbols are now the decoration of the Magic Door.

Since you are there, have a walk under the covered porticoes around Piazza Vittorio and visit the Nuovo Mercato Esquilino, a food market where you can find just about everything from all over the world.

READ MORE: Looking for a hotel in Rome? Here are our recommendations for budget and five-star accommodations in the city!

The Non-Catholic or Protestant Cemetery of Rome was created to be the final resting place of foreign diplomats, non-Catholics and foreigners living on Italian soil. Buried there are also the only son of German writer Goethe, Italian politician and founder of the Communist Party Antonio Gramsci, and English poet John Keats.

The tombs are beautiful sculptures and the cemetery lies on the backdrop of the Pyramid of Caius Cestius. You can spend a lovely afternoon admiring the sculptures and discovering how many notables are buried there. If you bump into some cats wandering around, it’s all normal, there is a large cat colony right there between the cemetery and the Pyramide.

Santa Prassede Basilica, one of the least visited churches in Rome

A truly fascinating hidden gem in Rome lies in the Esquilino neighborhood. Santa Prassede Basilica was named after Saint Prassede, sister of Saint Pudenziana, two noble Romans, daughters of a Senator, who converted to Christianity and were martyred.

In the same neighborhood there is also the basilica devoted to St. Pudenziana, and both churches show wonderful religious mosaics.

The Aventine Hill, a treasure trove of Rome’s hidden gems

This Aventine Hill neighborhood, close to the heart of Ancient Rome, is a true treasure trove of hidden gems in Rome. Now very famous and almost always with a long queue, the Aventine Keyhole is actually its most touristy place alongside the panoramic Garden of the Oranges.

Enter the churches of this neighborhood and don’t limit yourself to the modern-day street level. Go underground and discover early-Christian basilicas, Roman houses and Mithraic temples.

While Trastevere is definitely not offbeat Rome, the ancient pharmacy of Santa Maria della Scala is one of its hidden gems. Operative from the 16th century to 1954, here the Discalced Carmelite friars used to make potions, balms, oils, clay and herbal remedies for all kinds of ailments. It’s a small exhibition but very fascinating, one of the things I suggest you do in Rome.

The largest urban park of ancient Rome, Horti Sallustiani belonged to Julius Caesar. Rather than one of the hidden gems in Rome, it’s a lost one. Now, in fact, it’s private property so we can’t visit the whole park but we can see it from the entrance.

Unfortunately only a small piece, but if you visit the Centrale Montemartini Museum in the Ostiense neighborhood, you can see a large piece of the mosaics that formed the floor of the ancient villa at the Horti Sallustiani.

If you do visit, don’t miss a slice of goodness at Pinsere, one of the best pizza places in Rome.

WANT TO READ IT LATER? SAVE IT TO YOUR BOARD!