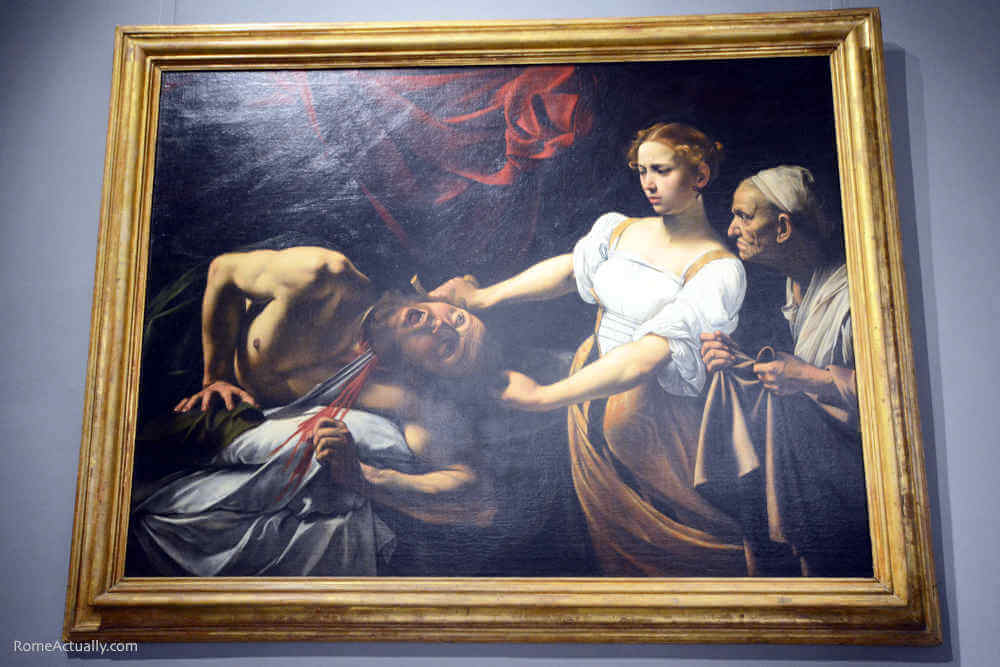 Who doesn’t know Caravaggio? And who doesn’t like his outstanding work? The Italian painter, whose real name was Michelangelo Merisi, is one of my very favorite artists. In his time, between the 16th and 17th centuries, his style was innovative and his technique one-of-a-kind. Caravaggio in Rome can be found in many places including churches and museums, all easy to reach and most of them a must for anyone traveling to the eternal city.

The famous Baroque painter was born in Milan and spent some eight years in the capital mingling with other artists, intellectuals, notables, and popes. I love finding Caravaggio paintings in Rome, and thankfully there are quite a few so that you can make sure you don’t leave before seeing at least some.

So, where is Caravaggio’s work displayed in Rome? Here are 7 easy places to see Caravaggio paintings in the eternal city: let’s dig in!

Caravaggio lived in Rome roughly from 1593 to 1606. The first years Caravaggio spent in Rome were very hard, changing from one residence to another and frantically looking for patrons and commissions.

His Roman time played a pivotal role in shaping his style and artistic expression. Even though the first years of Caravaggio in Rome were difficult, this is when he started bringing his innovative style to the more traditional and decorative official local art scene.

It’s in his earlier paintings that we can already notice his desire to change the rules and bring more realism into his work. From the beginning, he strives to portray real-life images and add a moral message to them, leading critics to drop the initial belief of naivety and lack of purpose in his early work.

Strongly influenced by artists like Titian and Raphael, Caravaggio soon starts creating his own technique, including the use of colors, lights and shades, and chiaroscuro, as well as sourcing his subjects from the streets.

Around 1595, Caravaggio met the Cardinal Francesco Maria del Monte, a highly educated art enthusiast and collector who introduced him to a large circle of intellectuals and notables of the city, future patrons who will give him important commissions.

Some of the features we can see in the works of Caravaggio in Rome are dramatic movements and facial expressions, as well as ordinary, humble settings such as the tavern-like ambiance in the Calling of Saint Matthew, kept in Santa Maria del Popolo Basilica.

Caravaggio went down in history as a bad-tempered artist mainly due to the killing of his opponent in a game, an incident for which he was sentenced to death and that led to his escape in May 1606.

Here is a handy Caravaggio in Rome map to find his immortal masterpieces quickly. This is an easy itinerary that brings you around Rome’s most famous landmarks but that you can follow in more days depending on your travel plan. So if you are devoting one day to the city center, you are likely to see a few Caravaggio works in Rome while you will see the others when visiting Trastevere or the Vatican.

Where to see Caravaggio in Rome

Saint Louis of the French is one of the churches in Rome with Caravaggio paintings. It contains three of his masterpieces, nonetheless. Located a stone’s throw from Piazza Navona, on the right side of the central nave you can admire the three paintings part of Caravaggio’s Saint Mathew’s cycle that represent the life of the saint in its three most important events.

All close to each other, you will see The Calling of Saint Matthew, representing the moment when Christ hints at Matthew to follow him, The Inspiration of Saint Matthew, and The Martyrdom of Saint Matthew. In all three of them, you can’t miss the style that makes the artist famous and a master of Italian Baroque. The outstanding interplay of lights and shades typical of Caravaggio’s masterpieces, the strength and intensity of the movements and facial expressions, and the energy his brushes convey are all features you are going to find here.

Just like for every church in Rome, the entrance is free of charge, but if you want the light on the Caravaggio paintings, you will need to put in 1€.

Very close to Piazza Navona and the Church of San Luigi dei Francesi is another church that shows Caravaggio in Rome, Sant’Agostino Basilica in Sant’Agostino Piazza. This Caravaggio painting was one that sparked some scandal at his own time because of the seemingly too casual allure of the Holy Mary.

This Caravaggio painting in Rome is known as Madonna of Loreto or Pilgrim’s Madonna and is worth a quick detour from your classic tour.

A few examples of great Caravaggio works can be found in Palazzo Barberini. Among his paintings, here you will see the beautiful and vivid Judith Beheading Holofernes that some critic sees as inspired by the beheading of the young Roman patrician Beatrice Cenci, sentenced to death for killing her abusive father.

Even though it’s likely that the obstreperous painter witnessed Cenci’s execution, a central case at the time, art historian and curator at Palazzo Barberini Michele Di Monte disagrees. According to Di Monte, the date of the painting is not certain, it could have been made the year before Cenci’s death (1599), and the same beheading of Cenci was different than the beheading in the painting.

Palazzo Barberini Galleria Nazionale d’Arte Antica is home to other Caravaggio paintings in Rome including the stunning Narcissus, John the Baptist, and Saint Francis in Prayer.

Another museum where you can see Caravaggio in Rome is Palazzo Corsini. Located in Via della Lungara in Trastevere, Palazzo Corsini is part of the Galleria Nazionale di Arte Antica together with Palazzo Barberini.

Caravaggio’s work on display here is another version of the John the Baptist series the painter was very close to. This particular painting shows a real-life John the Baptist in a sitting position against a dark background and features the red drape we can see in other works representing the saint.

Another church in Rome with Caravaggio paintings is Santa Maria del Popolo Basilica in the namesake Piazza del Popolo, one of Rome’s most stunning piazzas. Here are two masterpieces of the great painter, the Conversion of Saint Paul and the Crucifixion of Saint Peter, both kept in the Cerasi Chapel.

Both these Caravaggio paintings in Rome are an ode to his favorite features and give the scenes a dramatic realism. Entrance is free of charge because it’s a church. If I remember well, here, too, to switch on the light on the paintings you will need a coin.

The stunning museum located in Villa Borghese is home to the largest collection of Caravaggio paintings in Rome. Here, in fact, you can see no less than five masterpieces: Young Sick Bacchus (his possible self-portrait), David with the Head of Goliath, John the Baptist (different from the one kept at Palazzo Barberini, but maintaining the red drape), Madonna and Child with St. Anne, St. Jerome, and Boy with Fruit Basket.

Galleria Borghese is one of Rome’s top museums, so visiting here won’t be only to see Caravaggio but to really soak in art through a rich exhibition of many other great artists including Raphael, Titian, Bernini, and Canova.

One of the top landmarks not to miss is the Capitoline Museums, packed with art and history. Here, too, you can see two works of Caravaggio in Rome, one of the many versions of Saint John the Baptist, also known as Youth with a Ram, and The Fortune Teller.

In the Fortune Teller painting, Caravaggio briefly drifts away from biblical scenes and focuses on daily, street life. The young fortune teller and the nobleman exchange an intense look, or better, the gipsy girl is carefully looking at the boy to make sure he’s not aware that she’s stealing his wedding ring. Some critics highlight that the detail of the wedding ring is not fortuitous but intentional to give the double meaning of a warning against the thieves that back then abounded in Rome and the weakness of a young man punished with the loss of a valuable possession.

Caravaggio in Rome played a leading role in an artistic revolution in the use of colors, the chiaroscuro technique, the subjects, and the weight of realism in the representation. In the Deposition, Caravaggio is impeccably conveying a sense of tragedy, mourning, and suffering by portraying Christ at the moment when he laid on the stone that was used to close the sepulcher in the presence of the Virgin and Mary Magdalene.

Just like the Borghese Gallery, if you decide to face the long queue to enter the Vatican Museums, you are likely to take a whole tour and admire highlights such as the Sistine Chapel displaying Michelangelo’s Last Judgement, Raphael’s Rooms, the Gallery of the Candelabra, and the Gallery of the Maps.

A beautiful notable palace you can access from Via del Corso, Galleria Doria Pamphilj is another place where you can see Caravaggio in Rome. Two of his paintings are kept here: Penitent Magdalene and Rest of the Flight into Egypt.

The Penitent Magdalene is an early work of Caravaggio in Rome and depicts the holy woman in an obvious state of remorse towards her previous sinful life, where she drops a necklace of pearls and a jar of lotion, oil, or perfume.

The Rest is also one of the early works of Caravaggio in Rome, probably dating back to the end of the 16th century. Purchased by the powerful Donna Olimpia Maidalchini Pamphilj, this is one of his first large paintings showing sacred figures as opposed to the small canvas he was used to doing. It shows an angel playing violin in front of Saint Joseph and a sleeping Madonna with her Child all surrounded by lush vegetation.