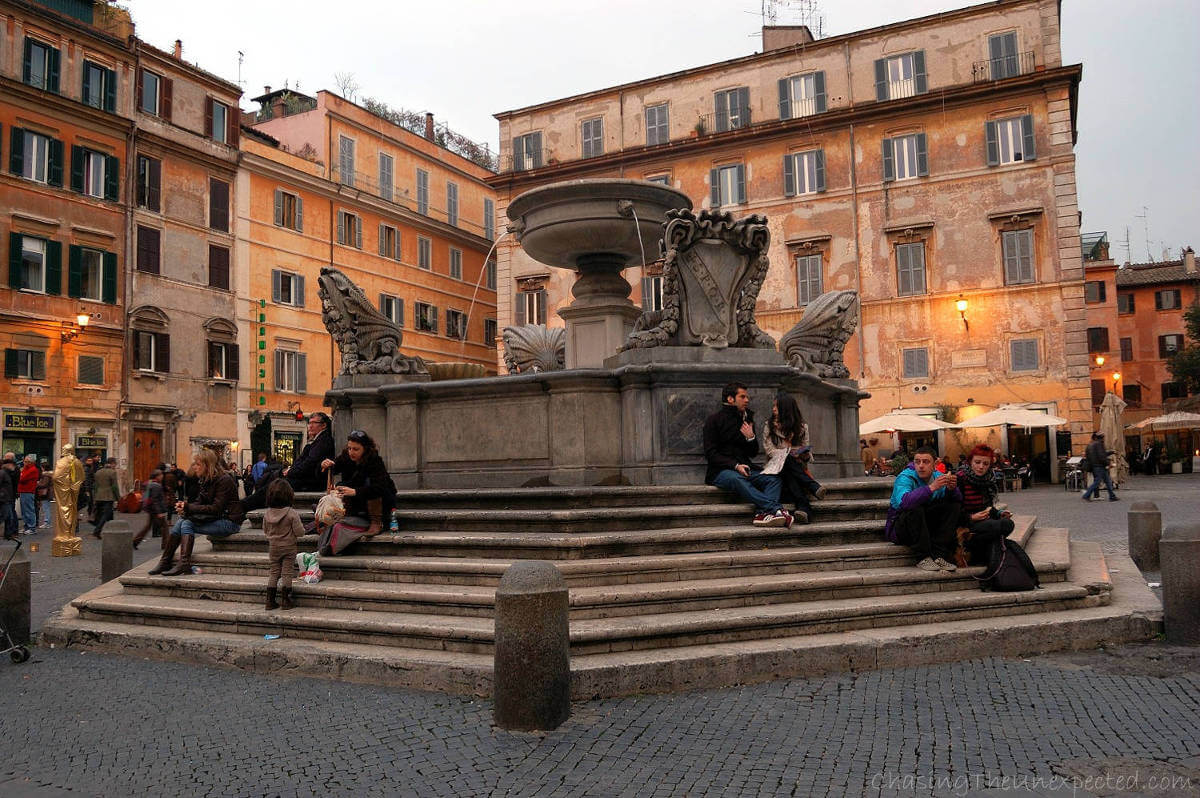 Even though the touristy area of the Rome Trastevere neighborhood is pretty compact and walkable, the whole district is very large. A favorite hangout among locals and tourists, Trastevere is one of those Rome neighborhoods where anyone can find something to do. Between major landmarks and hidden gems, this is one of the first areas that get full of tourists. Formerly a working-class neighborhood now largely gentrified and turned into a luxury hotspot, Rome Trastevere much retained of its original charm despite the few unfortunate commercial ideas that are always less common.

Wandering its winding alleys and charming piazzas is revealing of moments from yesteryear Rome. Adding fountains, gardens, beautiful churches and notable palaces will add value to an already alluring experience.

The rione takes its name from the Latin “trans Tiberim”, beyond the Tiber, its location from the heart of the city that developed mainly on the other side of the river. In Augustus’ time, this area was still outside of the city and only at the end of the republican period did utility buildings and houses of workers, inn owners and small traders start to rise due to the job opportunities given by the proximity to the river. In the imperial age, Trastevere was already a large district where all types of artisans and workers found their homes and opened their workshops.

Throughout the centuries, Rome Trastevere managed to preserve very well its original appearance and features of a rundown, somewhat poverty-stricken neighborhood, especially if compared to the other side of the city where notable villas, temples, and imperial fora shaped the public life. In the first years of Christianity, a confusing cluster of little houses, taverns, and inns were built between and around early-Christian churches.

We have to wait until the beginning of the 16th century for the area to start changing look when Pope Julius II ordered the connection of the Vatican with the Capitoline and the Palatine Hills through the construction of the current Via della Lungara and Via della Lungaretta roads. This is when the neighborhood, easily connected to the historic heart of the city, starts thriving.

A burst of small trattorias, workshops of the most different professions, artists, and notable families started gathering in the area concocting into making Rome Trastevere the jewel that is now. The district was officially nominated Rome’s 13th rione by pope Benedict XIV in 1743.

From a makeshift working-class, popular district into a gentrified, exclusive neighborhood, this is one of the best places to visit in Rome to discover its most intimate soul. Wear comfortable shoes and get ready for an exciting city expedition.

If you consider the borders of the larger area, Rome Trastevere might look quite big. If you look at it from Piazza della Rovere through Viale delle Mura Aurelie and the long Viale delle Mura Gianicolense boulevard, and from Piazzale Portuense all the way to Lungotevere Ripa, Lungotevere degli Anguillara, Lungotevere Raffaello Sanzio and Piazza della Gensola, you will have all the reasons to doubt that you can explore it in one day or in a single trip.

Fret not, we have drawn an easy map for you to get your bearings in Rome Trastevere and its most popular sites so that you can soak in the right spirit of this traditional neighborhood that much owes to its proximity to the river.

How to Reach Rome Trastevere

Rome Trastevere is pretty easy to reach from several other districts using the local public transport. The neighborhood is in fact connected to other areas via bus, tram, and train. The only means of transportation that doesn’t reach Trastevere is the metro.

From Termini Station, you can combine two buses, for example, the 75 and the H, or 40 bus and tram n. 8. This will take a bit long, no less than half an hour even with little traffic and little waiting time at the bus stops. If you are inside the station you can find a train that stops in Trastevere train station and from there take the tram n. 8 for a few stops.

If you are only going from one station to another inside the city railway, your normal single ticket of €1.50 for 100 minutes or correspondent daily or weekly will work, no need to buy a specific train ticket. So the same applies if you are near another train station such as Ostiense, Tiburtina, San Pietro, or Valle Aurelia.

On the other hand, you can easily get to Rome Trastevere from Campo de’ Fiori with an easy stroll through the charming working-class alleys and then crossing Ponte Sisto bridge that will get you directly to Piazza Trilussa between Lungotevere Raffaello Sanzio and Lungotevere Farnesina. You can also reach Trastevere with a pleasant stroll from Ponte Sant’Angelo bridge and the Hadrian Mausoleum walking all along the Lungotevere.

If you are visiting the Jewish Ghetto, you can get to Trastevere with a lovely and extremely picturesque walk through Ponte Fabricio bridge, Rome’s oldest bridge still intact, crossing the Tiber Island and finally Ponte Cestio bridge to end up in the western part of Trastevere, where is Santa Cecilia in Trastevere Basilica, one of my favorite landmarks in the area.

If you are driving in Rome, remember that Trastevere is ZTL every day until 10 am. After that, you can drive around the center of the neighborhood but seeing the narrowness of the alleys, really, why would you??

Make sure you read our article on the most important and beautiful bridges in Rome.

Getting Around Rome Trastevere

The best way to get around Rome Trastevere is on foot. Even though the district is quite large, the major landmarks and things to do can all be reached with an easy stroll. If you arrive from Viale Trastevere and you want to get directly to the buzz zone stepping into Via di S. Francesco a Ripa all the way to Piazza San Calisto that will lead you to Piazza Santa Maria in Trastevere Basilica.

From here, with a short walk, you can get to the Botanical Garden and finally get lost in the neighborhood’s cobbled alleys, a major attraction and what makes Rome Trastevere enchanting. Everything will be even more appealing if you wander around while enjoying a fantastic gelato from one of the area’s and Rome’s best gelato shops, Otaleg, Fiordiluna, or Fatamorgana.

If you arrive from the Jewish Ghetto, after crossing historical bridges and the scenic Tiber Island, you have two options. You can take a walk along the Lungotevere and cross the street when you reach Viale Trastevere or Piazza Trilussa to be already in the heart of the neighborhood, or right after Ponte Cestio bridge, you can explore this lesser-known part of Rome Trastevere around Piazza Gensola right past Lungotevere degli Anguillara.

Where to Eat and Drink in Rome Trastevere

Being a tourist area, until not long ago, it was a bit hard to find restaurants serving good quality, genuine recipes. Thankfully, now it’s not really the case anymore because even in Rome Trastevere you can find excellent eateries for literally every taste and preference, from the vegan style to the hearty Roman cuisine.

Being in such a historical neighborhood, a traditional restaurant seems the natural lunch destination. In this case, Da Enzo al 29 is considered one of Rome’s best restaurants and will deliver plenty of local delicacies such as meatballs on tomato sauce, Roman-style tripes, oxtail alla vaccinara, and the very classic tonnarelli cacio e pepe, pasta carbonara, rigatoni amatriciana, and rigatoni alla gricia.

If you are into a lighter yet fulfilling meal, you should try the tasty meals of Aromaticus specialized in the healthy revisitation of traditional dishes or original recipes all together with large use of fermented foods such as tempeh and fermented drinks such as kefir and flavored kombucha.

Rome Trastevere offers a great deal of sightseeing so if you prefer to have a quick casual lunch instead of sitting at a restaurant table for a longer meal, you can stop at Trapizzino‘s in Piazza Trilussa or at La Norcineria in Via Natale del Grande near Piazza San Cosimato. And if pizza is what you need to round off a long but rewarding day exploring Trastevere’s secrets, book your table at the fantastic Pizza Seu Illuminati for one of the best pizza in the city.

Where to Stay in Rome Trastevere

Booking a hotel in Trastevere doesn’t necessarily have to be expensive. Whether you are looking for a hotel, a guesthouse, or a simple B&B, here hospitality is a long-standing legacy. Hotel rates in this part of the city might be higher than in suburban areas but hey, you are in the heart of the buzz, a compact neighborhood that is lively day and night. The proximity to the American John Cabbott University makes it a favorite spot amongst young students, but locals, as well as tourists, are also part of the reality.

Some of the places you can check out include the charming Donna Camilla Savelli VRetreats 4-star hotel set in a former monastery, Nikis Collection Trastevere guesthouse, or Horti 14 Borgo Trastevere 4-star hotel near the Orto Botanico gardens.

If you would rather enjoy the intimacy of a private home in the heart of the neighborhood, you can pick any of the many exclusive, luxury apartments including Casa del Moro, S.Apollonia Suite Trastevere, Loft in Trastevere, and Trastevere Star.