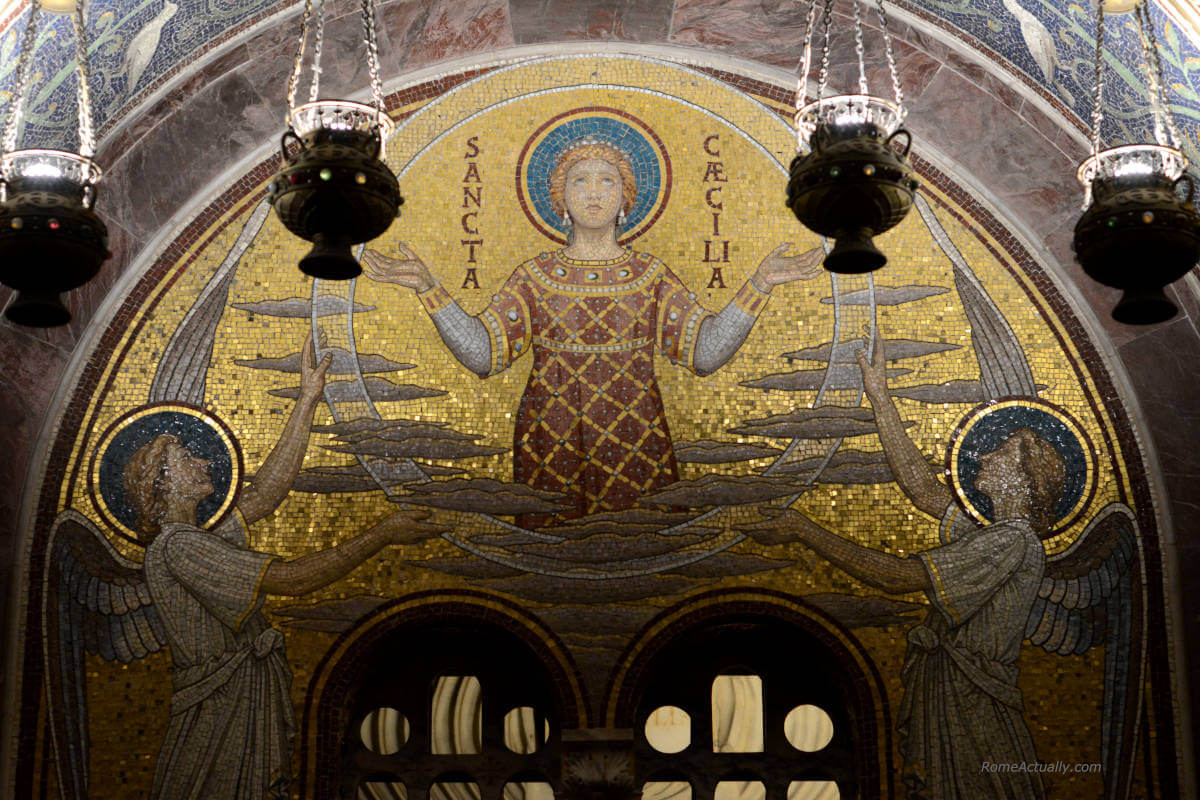 One of the lesser-known churches in Rome, Santa Cecilia in Trastevere Basilica is a fantastic stop if you are exploring Trastevere neighborhood. In fact, I always suggest visiting this beautiful Basilica not only for its aesthetic but also for the history you can learn going down its many layers.

With all the places to admire underneath the surface, Rome underground tours reveal so much of the most ancient history and how life went by throughout the centuries. Santa Cecilia in Trastevere Basilica is one of those landmarks often left out of the classic tours but I totally recommend carving some time for it as it hosts one of the best archaeological sites in Rome.

Located in Piazza di Santa Cecilia, the Basilica was built on the site of the house of the Roman martyr and her husband Valeriano.

The diggings under the church revealed several remains from the Republican age, including a carving representing the Minerva goddess. In the undergrounds of the church, we can see layers and renovations belonging to different centuries. There are the remains of a domus and a workshop probably for the business of making leather. In the VI century, St. Gregory the Great ordered the construction of the first basilica devoted to the martyr.

St. Cecilia was found guilty of trying to convert to Christianity her husband and her brother. She was martyred in 230 AD in what today are the undergrounds of the church. Cecilia was kept for three days in the “calidarium” area to make her suffocate with the hot steam. Since after three days she was still alive, she was beheaded.

After centuries, in 820 St. Cecilia’s body was found intact in the catacombs of St. Calixtus and Pope Paschal I ordered to transfer her to St. Cecilia’s church, which was then fully renovated. In 1599, her body was exhumed and found still intact wrapped in her white garment, her hair wrapped in a veil, her face towards the ground and signs of blood and wounds on her neck.

What to see in Santa Cecilia in Trastevere Basilica

Stepping over the gate on the piazza, you will find a large courtyard to cross before entering the basilica. The facade of the church is pretty plain and simple. Right before, is a porch with columns and a 12th-century mosaic. Probably what stands out more is the large bell tower.

Right in the middle of the courtyard is a large white amphora originally used for the ablutions citizens had to do before entering the church. Catholics don’t have this obligation anymore, but what we kept from those times is the custom to dip the fingers in the holy waters at the entrance.

Inside the church of modern-day street level, right in front of the main altar is the marble tomb of Saint Cecilia, patroness of musicians. The tomb has the shape of her body how it was found after being transferred from her original burial place, with her face turned towards the ground and her head wrapped in a white veil. The statue is the work of Stefano Maderno.

The main church, divided into three naves, is beautifully decorated with colorful marble, pillars, mosaics, and a large 18th-century fresco.

The undergrounds of Santa Cecilia in Trastevere Basilica

But please, don’t stop here, as the undergrounds of the basilica are incredibly fascinating. Explore its stunning crypt decorated with a forest of pillars Byzantine-style. Maybe because of the many arches and pillars, it reminded me of the Mezquita in Cordoba. From a window above the altar you can see the sarcophagi of St. Cecilia, St. Valeriano, St. Tiburzio and St. Massimo. This crypt is really beautiful and if you enjoy photography, here you can snap some nice pictures.

Your tour is still not finished as the landmark includes also a pretty large archaeological site beneath. At some 5-meter depth are the walls and pillars of what was likely a warehouse in Republican age, a 2nd-century private house (domus) later probably turned it into a block of flats as in the imperial age Trastevere area started to be more populated.

To build this “insula”, workers kept part of the original walls, created a courtyard that we can partially see as well as we can view also traces of an ancient road, a small bath establishment, the original floor, and the staircase to access the building.

Walking through the different sections of this building of ancient Rome, you will see a blend of pagan images and more recent Christian objects such as a rub for the Baptism, as well as working areas.

Address and opening hours of Santa Cecilia in Trastevere Basilica

How to reach: The easiest way is to take tram 8 either from the city center (Piazza Venezia, Largo Argentina, etc.) or from Trastevere Station. Get off at Trastevere/Mastai stop in Viale Trastevere and take Viale dei Genovesi. You will get there in less than 10 minutes.

Where to eat near Santa Cecilia in Trastevere Basilica

There are several restaurants in Trastevere, but one very close to the church that I suggest stopping at for lunch or dinner is Da Enzo al 29, famous for serving excellent traditional Roman dishes. If you prefer a lighter meal, on the other side of Viale Trastevere is Aromaticus, a green and delicious bistro.

Not far from the Basilica of Santa Cecilia in Trastevere, you will also find a Trapizzino eatery/winery and some of the finest gelato places in Rome such as Otaleg, Fiordiluna, and Fatamorgana.

If you are staying for dinner and feel like having a nice pizza, head to Seu Pizza Illuminati (Via Angelo Bargoni 10/18), one of the top pizza places in Rome.

Where to stay near Santa Cecilia in Trastevere Basilica

There are several hotels in Trastevere on both sides of the main road Viale Trastevere. The part around Santa Cecilia Basilica is more silent at night so you can probably have a better sleep while the heart of the neighborhood is packed with young tourists and pubs and restaurants that stay open until late at night.