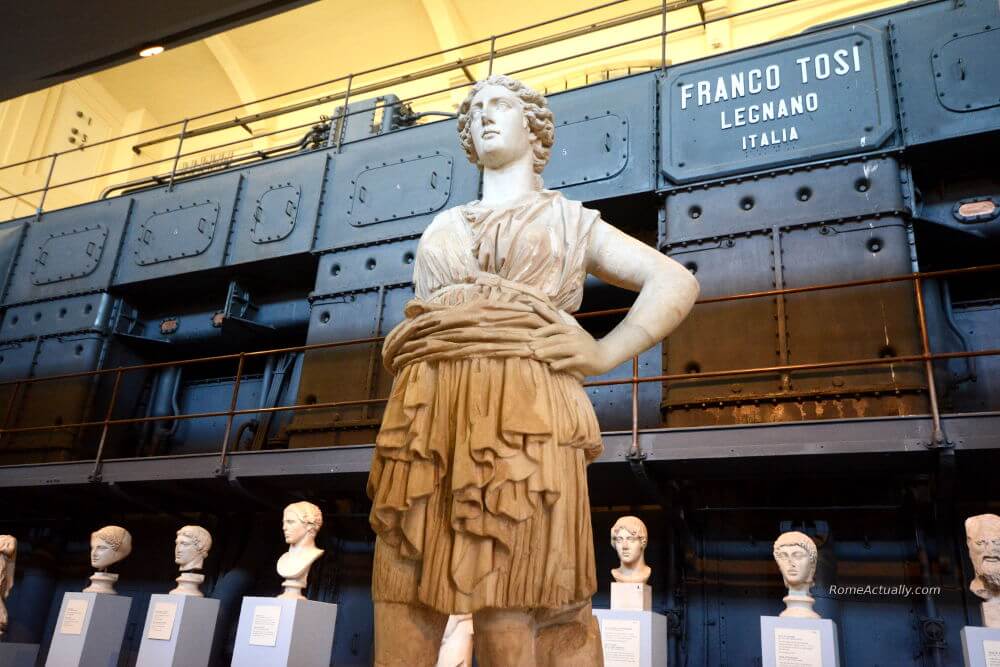 Probably not a place that you will visit if you have limited time, but definitely if you are spending one week in Rome. Here the sensual beauty of classic Roman art is enshrined and surrounded by the coldness of modern engineering. Formerly the pride of Roman technology and self-production, now in its 20.000 sq mt, poetry meets pragmatism, giving visitors a suggestive and unprecedented experience.

In 1997, a part of the classic collection of the Musei Capitolini from Palazzo dei Conservatori was transferred here and beautifully set up in striking contrast with the austerity of engines, furnaces and all types of machinery in charge of producing electricity. This exhibition, launched with the suggestive title “The Gods and the Machines”, became permanent in 2011 and the former power plant that produced electric energy for the city had now turned into a charming cultural space continually expanded and renewed.

Find out here the history and what to see in the Centrale Montemartini Museum, one of the things I suggest you do in Rome. In the end, you will also see tips on how to get there, tickets and what to see and where to eat in the area.

Opened in 1912 between the General Warehouses and the left bank of the Tiber river, Rome’s main power plant was established in an area where it would have been easy to source the necessary water. From here, electricity was produced with steam turbines, furnaces and diesel engines.

The machine room was totally refurbished in the early 1930s and in 1933 two new huge Tosi 7500 HP diesel engines, inaugurated by Benito Mussolini in person to celebrate the pride of Rome’s ability to produce its own electricity supply. Additional new machines were added all throughout the decade.

During WWII, American and British bombs didn’t hit the power plant, so it could keep providing electricity to the city even after the liberation from the Nazis. In the ’60s, a symbol of an outdated economic and productive system, Rome’s main power station was dismissed. Some suggested taking it down, but thankfully they didn’t and this beautiful museum was established.

Ancient and modern, old and new, side by side. The power of technology here is shown together with a display of classic artwork, with the huge engines and turbines dominating the view in every room. The beauty of the ancient statues will make you travel in time, but the monumental machinery of Rome’s recent history doesn’t fail to make you feel nostalgic. A beautiful collaboration of classic archaeology and industrial archaeology, so dear in this area of Rome.

What to see in Centrale Montemartini Museum

Even though attractive and part of the Capitoline Museums, Centrale Montemartini is not one of the most visited landmarks in Rome, even though it can make for an unusual stop and a very exciting thing to do on a rainy day.

The museum consists of different areas. On the first floor are the Furnace Room and the Engine Room, while on the ground floor, you can visit Furnace Room 2 and the Column Hall.

The Engine Room is named after the two imposing Tosi 7500 Hp diesel engines from 1933 set in the middle with a Tosi 3000 Kw turbine installed there in 1915. This is the main exhibition hall and the first you will visit. All around these machines, you can admire statues taken from the city center, in particular from monumental Largo Argentina and the Theatre of Pompey. While Largo Argentina is still an open-air attraction and home to a feline colony, the Theatre of Pompey doesn’t exist anymore. Part of it can only be seen from inside Hotel Lunetta near Campo de’ Fiori in the city center.

Still on the first floor, in the Furnace Room, you can view decorative elements used in wealthy houses as well as a piece of the mosaic depicting hunting scenes from the Horti Sallustiani. Once opulent residential villa originally belonging to Julius Ceasar, Horti Sallustiani is now private property, so possible to visit only with a certified tour. In this room is also a steam boiler from the early 1950s.

The Column Hall displays a rich collection of portraits from the ancient republican age and important moments of Roman development, including its military victories and the luxury of the private life introduced with the conquest of Greece and the eastern colonies. You can also see a section devoted to the ancient funerary practices with a display of precious sarcophagi and the funerary chest of a little girl identified as Crepereia Tryphaena.

Easy to miss, but make sure you don’t, in Furnace Room 2 you can see three carriages of the train used by Pope Pius IX to travel all over the region. Built in 1858, the train includes the seating carriage, the papal chapel and the toilet.

READ MORE: Are you looking for a hotel? Check out the best areas to stay in Rome.

What to see and where to eat near Centrale Montemartini Museum

Centrale Montemartini in Rome is located in Ostiense, the neighborhood where best than anywhere else in the city you can explore the relics of the modern yet bygone industrial archaeology.

Once in the area, don’t miss places like the old gasometer, the old wholesale market warehouse and all the street art giving a touch of color in this once grey neighborhood.

Finding a good place to eat in Ostiense is not difficult. Among our go-to restaurants when in the area are the lovely Romeow Cat Bistrot for a fine vegan meal in the company of six furry friends, and Trattoria Pennestri (Via Giovanni da Empoli 5), a great new-ish place where traditional dishes are prepared and served with a modern twist.

READ MORE: Do you want to find out more about where to eat and see in Ostiense? Check out my eBook Tasting Rome by Neighbourhood to discover the best restaurants in five districts, Ostiense included!

Not far, within an easy stroll reach is former working-class Testaccio, where you can visit Rome’s Non-Catholic Cemetery and enjoy delicious traditional food in places like Felice a Testaccio or Trapizzino (Via Giovanni Branca 88) for a quick pizza/street food lunch. And if you feel like having a delicious dessert, here is one of my favorite gelaterias in Rome, Brivido (Via Giovanni Battista Bodoni 62B). 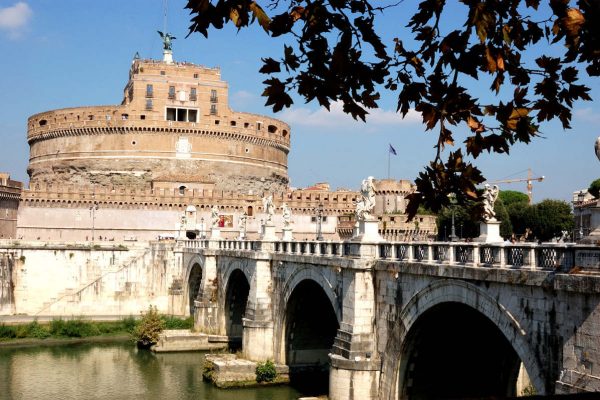 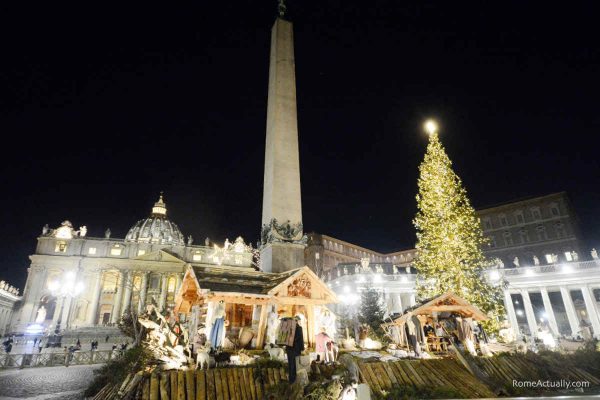 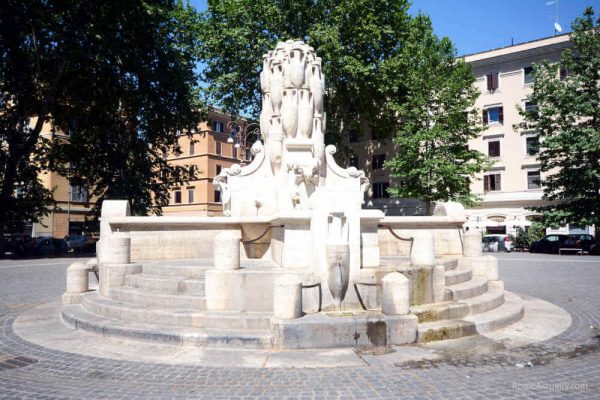 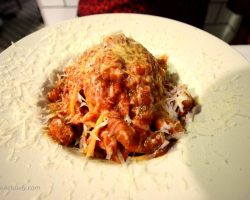 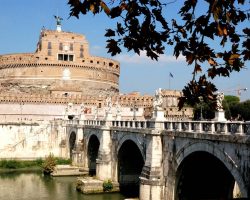 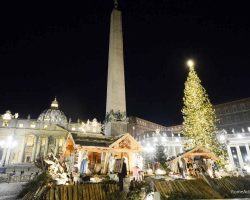 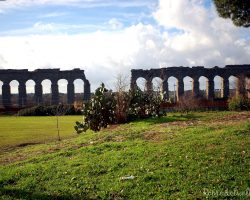 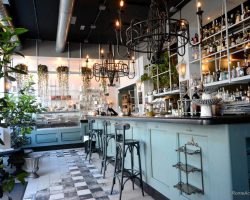