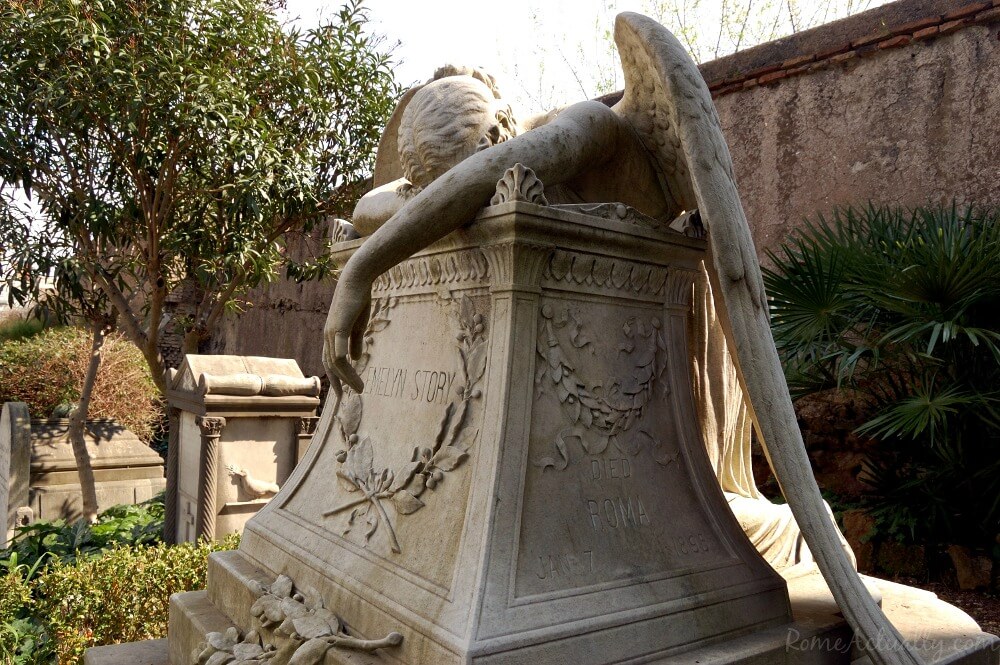 As spring begins to fill the city with colorful flowers, the time is perfect to visit the Protestant Cemetery in Rome, sometimes referred to as the Non-Catholic (Acattolico in Italian) or English Cemetery.

Whether it’s a sunny day or you can even wait for a slightly rainy day, here you will find inspiration for some romantic shots. Located in the Testaccio neighborhood in the shade of the Pyramid of Caius Caestius, this graveyard was open for the people who didn’t belong to the Catholic religion.

Discover the Protestant Cemetery in Rome

Notables buried in the non-Catholic Cemetery of Rome

A wealthy collection of artists, writers, poets, philosophers, and ordinary people are buried in Rome’s Non-Catholic Cemetery. Most people resting here are foreigners, but there are also graves of Italian people, both famous and ordinary citizens. Among the most distinguished Italians that here found eternal rest is Antonio Gramsci, one of my very favorite politicians, philosophers, writers, and thinkers, who died in 1937 after ten years of Fascist imprisonment.

One of the latest tombs added to the remarkable roster of big names in the Protestant Cemetery in Rome has been the one of famous Italian writer Andrea Camilleri who died in 2019.

What to See in the Protestant Cemetery in Rome

A suggestive mix of pagan symbols and different religions and traditions, while this cemetery might not be a straightforward attraction, should you actually visit the non-Catholic cemetery in Rome, it will no doubt make for an unconventional stop.

Even though this cemetery now attracts curious tourists as well as passionate photographers, it’s still one of those fascinating hidden gems in Rome that are still crowd-free. Walking around its alleys, you will find poetry, art, portraits, literature, still life, and virtuosity all around with a mix of crosses and sculptures that convey the feeling of mystery and beauty that wraps the place.

The cemetery is divided into the ancient part, where also Keats is buried, right next to the Pyramid and a newer section where you can find the tombs of several diplomats, poets, painters, writers, archaeologists, historians, scientists, architects, as well as Gramsci’s and the son of Goethe.

The population of this intriguing cemetery is extremely diverse. Apart from different professions, here there are the graves of people from different nationalities including English, German, Americans, Russians, Greeks, and even Chinese, all belonging to different religions such as Buddhism, Islam, and even Zoroastrianism and Confucianism. This is why the tombs’ inscriptions are in many languages, often also in different characters and alphabets.

What to do nearby the Protestant Cemetery in Rome

A fascinating neighborhood mixing old and new, here are some of the best things to do in Testaccio.

Very close is one of the top restaurants in Rome, the popular Felice A Testaccio, famous for its traditional recipes and especially for its tasty and creamy tonnarelli cacio e pepe that they finish preparing right on the table in front of amused customers.

One of our favorite gelaterias in Rome is right in this quarter. Brivido makes a large range of gelato flavors to meet every taste, preference, and diet need, including vegan and sugar-free options.

The most famous mural in the Testaccio neighborhood is the giant wolf in Via Galvani but walking around the area you can find other street art from great names including Alice Pasquini.

Walking a little further, you will end up in the vibrant Ostiense area. Trendy and colorful, if you do make it here you don’t want to miss the Ostiense huge street art and the decadent relics of a recent, yet bygone industrial past such as the General Markets, the Gasometer, and Rome’s former power plant Centrale Montemartini, now turned into a museum.