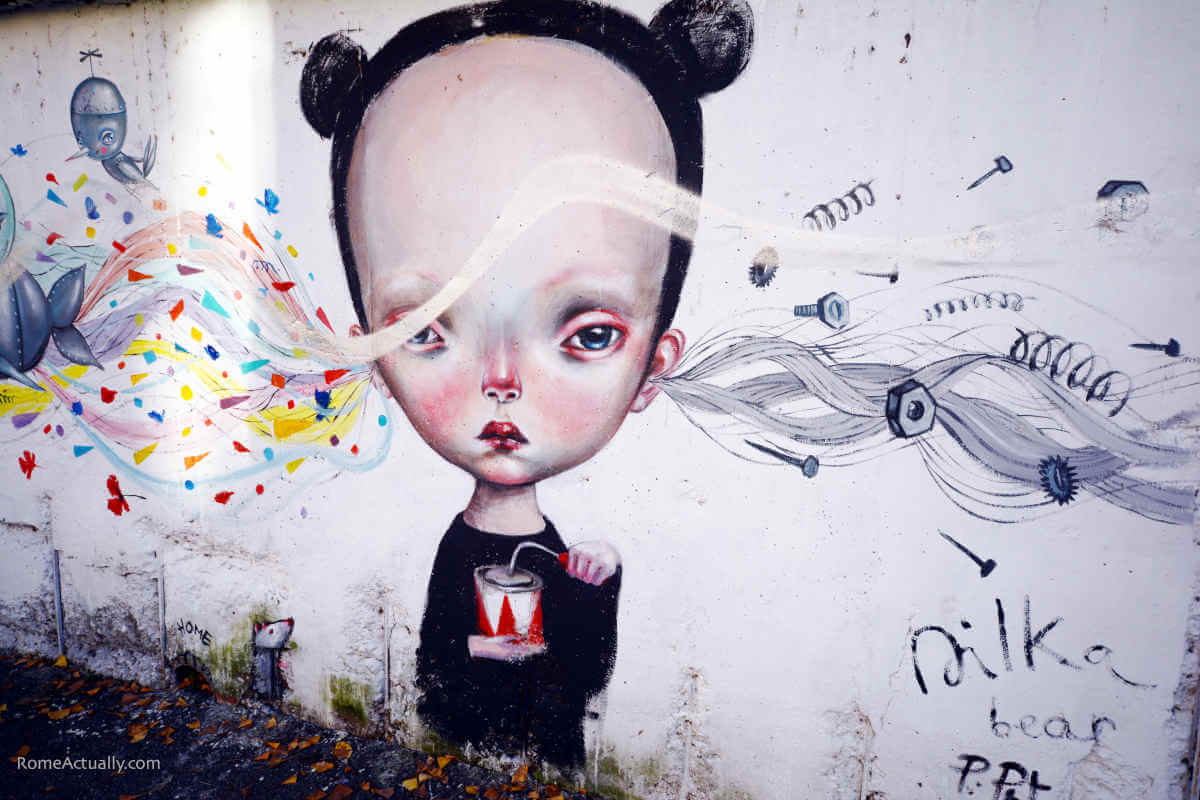 Along with the beautiful murals of Ostiense, another famous urban redevelopment project in Rome is what made the street art of Quadraro see the light. If you thought the things to do in Rome were only related to BC times and ancient artwork, take the metro to Quadraro/Porta Furba and get ready to snap great shots with your DSLR.

Of course, if you only have one day in Rome, you will rather stick to the city center to see as much as you can of the beauty and art and frescoes and carvings scattered all around town from imperial times to the Renaissance period. But as the city’s moniker suggests, the art production in the eternal city looks quite alive and kicking still today.

How Rome’s Quadraro Street Art Neighborhood Came to Be

I love taking photographers’ outings in Rome, and when I went to the Quadraro neighborhood, I was on the lookout for its famous murals.

Founded in 2010 by artist David “Diavù” Vecchiato, this street art project is known by the name of “MURo“, an acronym for Museum of Urban Art of Rome that plays, in Italian, also with the word “muro” meaning “wall”, as these graffitis are precisely all over the walls of the neighborhood.

The main goal of the MURo project has been to make artists relate to the community, specifically the one living in the otherwise uneventful Quadraro neighborhood, interpreting and respecting the spirit of the place by sharing new colors and messages with the residents and confronting with their ideas and personal stories.

As Rome’s city center is often described as an open-air museum thanks to its archaeological vestiges, Quadraro can easily be considered its contemporary counterpart. With the perks of being one of the free places to visit in Rome, public, and starting from the bottom of the society, rather than being commissioned by emperors, kings, or popes.

Officially started in 2012 with the patronage of Comune di Roma, the project is always evolving, and new murals are being created by the day.

With the closest metro station being Porta Furba Quadraro of line A, start your tour from Largo dei Quintili, carrying on to Via dei Lentuli, Via dei Pisoni, and the backstreets of the main ones to admire the work of Italian and international street artists. Our suggested itinerary will start right there, at Porta Furba metro station, and these are some notable murals to see, in order of “appearance”!

Among the first ones that will appear to you is the colorful mural by the same founder and creator of the project, Diavù, a sort of introduction to the neighborhood, “Art Pollinates Quadraro” (the first picture on top), in Via dei Lentuli.

Carry on to Via del Monte del Grano for Lucamaleonte “Nido di Vespe” (Wasp Nest), then to Piazza dei Tribuni for a giant collective mural by Nicola Alessandrini, Lisa Gelli and again Diavù.

To continue with your Quadraro street art itinerary, go back to Via dei Lentuli for a few other murals, including Diavù’s “Quadraro People”, the faces of Zelda Bomba, Duality by Mexican artist Malo Farfan, Dilkabear & Paolo Petrangeli, and Omino71 with “Tanti amici tanto amore”. After this rich show of colors and shapes, you will be at the Quadraro tunnel with Gio Pistone’s mural at the side of Via dei Lentuli and MrThoms on the other side on Via Decio Mure.

Cross back the tunnel to reach Via dei Lentuli again and take Via dei Corneli for more artwork. From here, you will see “La Fenice” by Alessandro Sardella, Jim Avignon’s “Street Art”, Beau Stanton, and Ron English in Via dei Pisoni.

The following Via dei Quintili is another road lined up with murals by Italian and international artists and you will find “Esodati” by Mauro Pallotta, “Sikame” by El Nino De Las Pintura, and a mural by Veks Van Hillik.

These are some of the most famous, but there are even more because even though the project started in 2010, for a few years afterward, artists kept adding their work, up until 2016 so far. You will find some parks, minor alleys, and backstreets, all potential venues for more street art, such as Alice Pasquini’s “It’s a New Day” in Via Antinori, or “Melting Faces, Stories and District” by Diavù, Lacamaleonte and Nicola Alessandrini in Via di Acqua Bullicante.

If you can afford more than three days in Rome and feel like getting to know the city also in its lesser-known districts and the ordinary daily life far from the city center, a walk around the Quadraro neighborhood can become as exciting as visiting a museum.

What else to do in Quadraro

This is a large mausoleum near Piazza dei Tribuni. A sarcophagus was found inside and the lid showed two figures lying down. At first, they were thought to be the emperor Alessandro Severo killed in Gallia in the 3rd century and his mother.

Even though further research cast doubt on this, the mausoleum is large and sophisticated, showing that it certainly belonged to a noble clan, likely the imperial family itself.

To visit this mausoleum you need to call Rome’s Tourism Board at 060608 to enquire about schedules and openings. The ticket costs 4€.

This beautiful fountain is in Via Tuscolana near the Porta Furba gate and was built in the 16th century as commissioned by Pope Sixtus V Felice Peretti as the last show of the Acquedotto Felice the same pope ordered to build.

In the 18th century, Pope Clemens XII renovated the fountain which was then named after him.

An initiative by Cinecittà Studios, the Italian Museum of Moving Images is a fascinating display of audiovisual installations from the rich production of the Italian cinema. Visitors can enjoy a full immersion in old movies and interactive installations of the most famous productions made in the famous movie studios.

How to reach and how much: planning tips to visit Quadraro 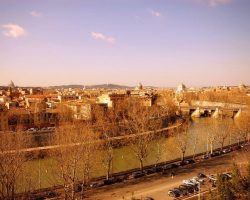