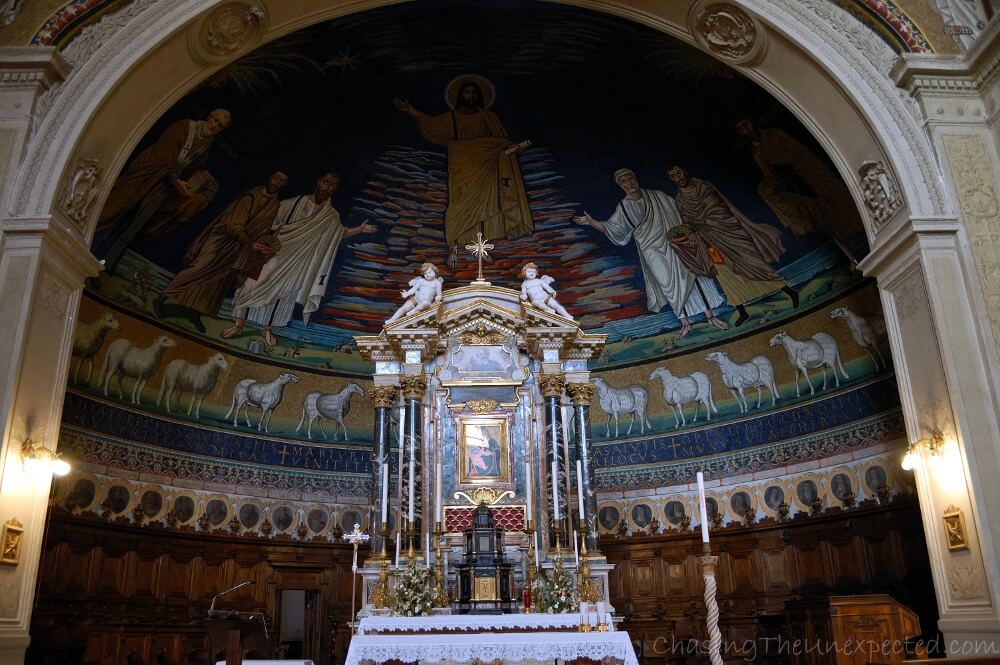 With a couple of thousands of years of history, art and aqueducts under its collective belts, many are the experiences the Eternal City has to offer its visitors. History buffs are in their very element, leaping from one century to another one in the same day, from the BCs to Renaissance years up to the most modern archaeology such as Rome’s old gasometer.

While there are many ways to enjoy the Italian capital, a unique and definitely original one is to follow a route inspired by the best mosaics in Rome.

7 Places To Discover The Best Mosaics In Rome

Below is just a little itinerary I’m sure in-the-know travelers and lovers of the finest human genius are bound to appreciate, stroll where I intentionally left out other great examples such as Santa Maria in Trastevere Basilica, to which I’ll devote a whole post.

Discover 5 of the best hidden gems in Rome!

The colorful Esquilino area, in the Monti neighborhood, is home to some of the best mosaics in the city. Start your tour at the beautiful Santa Maria Maggiore basilica, a short walk from Vittorio Emanuele metro station, and indulge in the exquisite combination of art and architecture already from its facade. Then get inside one of the most famous churches in Rome and admire the stunning mosaics dating back to the fifth century flanking the large central nave and illustrating the main biblical tales leading to the main artwork of the huge mosaic decorating the apse.

Santa Prassede basilica is one beautiful hidden gem near the city center and one of the least-visited churches in Rome. Very close to Santa Maria Maggiore, inside this church, you will also find some important relics such as the bones of some of Rome’s Christian martyrs, including Prassede’s. Both the nave and the two aisles, along with the lovely Zenone Chapel are beautifully decorated with mosaics of the ninth century portraying the Christ and a noblewoman, identified with Prassede herself, daughter of a Roman senator and the martyr this basilica is devoted to.

Sister of Prassede, Pudenziana was another martyr and her namesake early Christian basilica, Santa Pudenziana, lies a stone’s throw away from her sister’s resting place. Here you can admire some of the oldest mosaics in Rome dating back between 410 and 417, created right after Alaric’s Visigoths’ deadly sack of Rome in 410. Images of Imperial Rome were adapted to the Christian message, so Christ is portrayed sitting on Emperor Constantine’s throne and the Apostles dressed like Roman senators.

Commissioned in the 6th century by pope Felice IV after emperor Theodoric offered the Vatican the ancient Peace forum and the temple of the Divus Romulus. Merged, the two buildings created present-day church devoted to two Greek brothers, doctors and martyrs, that was enriched with some of the most beautiful mosaics in Rome in the apsis dating back between the sixth and the 7th century and representing the two saints being received in heaven.

Romans’ talent for engineering and overall passion for beauty is legendary, with today’s ruins showing only a tiny part of the elegance and majesty of imperial times. As part of their glorious architecture, today we can stare at the wonderful Caracalla Baths. Thermae Antoninianae were commissioned by Caracalla in 212 AD, and it took 5 years and some 9,000 workers to build what now is one of the biggest and best-preserved ancient thermal baths.

Inaugurated in 216 and renovated several times, they ceased to be operative in 537, when Gothic King Vitige severed the aqueducts to bend and conquer the city by thirst. Apart from the wide gardens and sculptures, we can see big chunks of the original mosaics created to embellish the floors and the interior of beauty salon rooms, usually portraying gods and muscular athletes.

Likely one of the oldest Roman churches and for sure the first one to be officially devoted to the Virgin Mary, Santa Maria in Trastevere Basilica preserves some gorgeous mosaics in Rome both inside and on its facade.

The Romanesque-style facade bears on top the mosaic of the Virgin Mary feeding the Child, two donors kneeling at their feet, and two saints holding a lamp. Inside, you can admire the Byzantine-style golden mosaic of the apse and the beautiful series of mosaics devoted to the life of the Holy Mary by Pietro Cavallini, Stories of the Virgin.

You can see these amazing mosaics in Rome’s Nomentano/Salario neighborhood in an area where several embassies are, along the large Via Nomentana road. The mausoleum is the last resting place of Costanza, the daughter of Emperor Constantine the Great, who was very faithful to Sant’Agnese, a Roman woman who was martyred and buried in the area.

In fact, Costanza built the so-called Basilica Costantiniana, where now you can see a few scattered Roman ruins, next to where Sant’Agnese was buried, and this is where is Sant’Agnese Basilica and where Costanza wanted her mausoleum. Now they are all part of the Sant’Agnese Fuori le Mura complex, where you can also visit the catacombs with prior reservation.

I knew the ceiling of the mausoleum was decorated with mosaics but until I saw them, I couldn’t really imagine how gorgeous they are. Stop right at the entrance and make sure you do the whole tour of the mausoleum because all the mosaics are worth it.