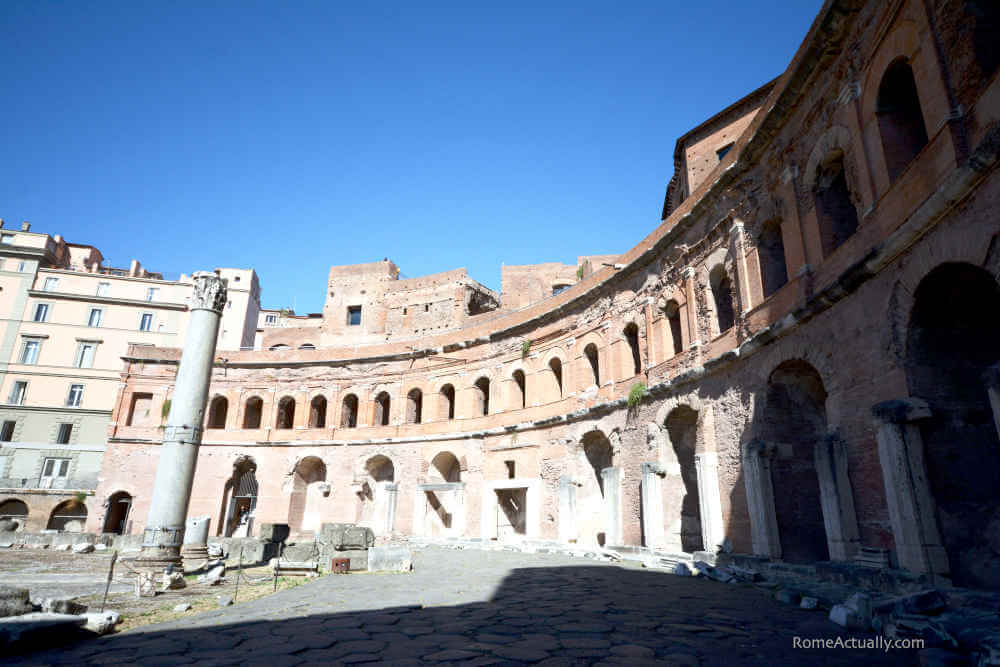 Opened to the public in 2007, Trajan’s Markets is not as nearly visited as it should be. Even though located very close to Piazza Venezia, right beside the Trajan’s Column everybody can see during a standard Rome tour, it attracts a fraction of the numbers the Colosseum sees every day.

Probably its entrance behind Piazza Venezia is a little hidden from the main tourist route and makes it a little harder to find it, but I guarantee you, it’s totally worth the detour.

The Trajan’s Markets were built at the beginning of the 2nd century AD to hide and support the cut made on the slopes of the Quirinale hill to build Trajan’s Forum. Even though this huge complex is known as the “markets” of Trajan, its purpose was actually different. Unlike what was believed at the moment of the discovery, this site was not used as a market for selling goods, fruits, veggies, or livestock but was actually the administrative center of the nearby Forum of the emperor Trajan.

It might not be on your list if you have only one day in Rome, but if you can afford at least 3 days in the eternal city or even better, a full week, I recommend considering it because it will inevitably add great value to your trip. We thoroughly visited it and while I was expecting to be done in an hour or so, we wandered around the markets and museum for more than two hours. It was so interesting that we didn’t even notice the passing of time and that lunch hour was nearing the end.

We wrote a complete guide to visiting the Trajan’s Markets in Rome including our tips to best enjoy your experience.

History of the Trajan’s Markets in Ancient Rome

Just like the name evokes, Trajan’s Markets are a fantastic archaeological site in central Rome. Re-discovered at the beginning of the 20th century and entirely repurposed between 2005 and 2007, this was a multifunctional center at the service of the adjacent Trajan’s Forum, so dealing with the administrative duties for the place where the emperor organized his public functions and official events.

Historians reached this conclusion due to how the spaces inside the complex were allocated and connected among each other through staircases and streets not accessible by carts. This shows that they were used as offices closely linked to the nearby Trajan Forum, including the one of the “procurator”, the judge in charge of the whole administration of the complex and the forum.

Other areas show the rooms that are believed to be used as the working place of treasurers of the imperial finances, some as the venue for official ceremonies and public events.

After the fall of the Roman Empire, the Trajan’s Markets were still in use. This is why archaeologists found several traces of later interventions. In the Middle Ages, local noble families occupied the large complex to turn it into a fortress also adding defensive towers and giving it a military structure.

Different eras, different purposes. Between the 15th and 16th centuries, the complex went through a time of full neglect, while in the second half of the 16th century several changes were made to adapt to the convent of Santa Caterina da Siena that occupied it. After the Italian unification, the building is occupied by military barracks until the first half of the 20th century when the works of historical digging and restoration begin.

The architecture of the Markets of Trajan in Rome

It’s likely that in Roman times, the hall on the southern end featured a facade showing a row of large windows under which was a round arch. This part, too, underwent several structural changes but diggings revealed that apart from being a support for the cut of the slopes of the Quirinale hill, it probably served as an auditorium for the Forum of Trajan to host public lectures or music auditions, or for learning activities.

The Small Hemicycle is also built on three levels and develops into a semicircular area, not accessible anymore, behind the Northern Hall around which we can still see the original black mosaic floor.

The second floor of the Small Hemicycle is laid out in a semicircular shape like the bottom level and features large windows. On the northern side, the corridor carries on straight and includes a staircase and other side rooms behind which the building opens on the Via Biberatica road.

A road made of large stone blocks in a typical Roman style connects the lower and the upper areas. One of the most ancient streets of Rome currently walkable, Via Biberatica crosses part of the modern Via Quattro Novembre on its northern side while towards the south it connects to the modern Salita del Grillo.

Behind the central body of the Trajan’s Markets and of the Great Hall is another ancient Roman stone road known as Via della Torre and an area called Giardino delle Milizie (Militias’ Garden) due to the presence of the Militias’ Tower (Torre delle Milizie) built in the 13th century by the Roman noble family that gave the complex a defensive military look and purpose.

From the windows of the halls today we have a view of the imperial fora. In ancient times, however, this wasn’t the case. On the opposite side of the Via Biberatica road, in fact, there were other spaces and rooms connected to the building that we can visit with a large arch.

What to See in the Trajan’s Markets in Rome

The layout of Trajan’s Markets consists of several buildings that opened directly on the street and are structured in six layers on the slopes of the Quirinale hill. From the building, after walking along the Great Hemicycle, you can go down and step inside the actual Trajan’s Forum, the large archaeological site visible from Piazza Venezia.

This is truly an incredible visit because the markets are a large ancient building displaying a rich collection of relics and the forum itself is an important landmark from imperial Rome.

Some segments of the Small Hemicycle have been heavily modified in the 17th century during the building of the Ceva-Tiberi palace. This is when the cross vaults and an elevated passageway gate were added.

Due to later construction endeavors in the surrounding neighborhoods, some areas of the Trajan’s Markets were sacrificed, such as connecting walls and entrances from the Via Biberatica road to local shops (tabernae).

Going down from the Great Hemicycle, where offices and archives of the tax clerks were, towards the ancient Via Biberatica road, step outside the Markets in the actual Forum of the emperor Trajan where you will find relics of carved pillars and walls.

Trajan’s Markets is not only an archaeological site like, for example, the Colosseum or the Roman Forum. All across the buildings of the complex, in fact, is hosted the Museo dei Fori Imperiali, one of Rome’s richest museums.

Your tour will start from the ground floor right after the entrance with a visit to the Great Hall. This was probably the venue for official ceremonies and the introduction to the complex of the markets and the history of the Imperial Fora.

Follow along with the rest of the rooms, each of them devoted to the introduction of every single imperial forum ending with the section devoted to Trajan’s Forum and the 17th-century cistern where you will see a collection of amphorae.

Wander the alleys and the decorations of Caesar’s Forum (46 BC), Augustus’ Forum (2 BC), the Templum Pacis (75 AD), Nerva’s Forum (97 AD), and Trajan’s Forum itself (112 and 113 AD). The imperial fora are recognized as a superb collection of monumental squares built in about 150 years in the center of Rome for administrative and judiciary activities as well as venues for celebrations and official events.

Among all the exhibitions, some fascinating collections are on the upper floor with relics from Caesar and Augustus Fora, the public spaces of two of Rome’s most important figures and leaders. The Trajan’s Markets are obviously conceptually and geographically linked to the city’s imperial fora, so arguably the best place to set up such a fascinating museum.

In the Museum of the Imperial Fora set inside the Trajan’s Markets you will find a great wealth of objects, sculptures, decorations, and pieces of the most monumental columns and statues found in each of the fora. A series of descriptive panels, videos, multimedia installations, and miniature tridimensional reconstructions add tremendous value to the experience.

Tips for a better experience

What to See near the Trajan’s Markets

Trajan’s Markets are in the very city center, literally minutes from Piazza Venezia, Via del Corso and Fontana di Trevi, so you will be close to most of Rome’s major landmarks. The place is a perfect fit in between any of the normal things you can do in the Centro Storico and Tridente area, whether this is sightseeing or heavy shopping.

Along Via del Corso, do some window shopping, duck into Galleria Alberto Sordi for some more boutiques, take a little detour to see the Pantheon and Piazza Navona, or head forward to the Spanish Steps and Trinità dei Monti before ending up in the beautiful Piazza del Popolo from which you can go sideways and visit the other two roads of the Tridente, Via Ripetta and Via del Babuino, and do some extra shopping.

If you have already visited Tridente and Centro Storico, from Trajan’s Markets you can head uphill and get around the lovely Monti neighborhood. Even though quite a popular place among travelers, you will find some important hidden gems including the Basilica of San Pietro in Vincoli, or a lovely vintage market, as well as experience the “square” lifestyle so dear among Romans sitting outside, enjoying a meal al fresco, strolling the streets.

Where to Eat near the Trajan’s Markets

In the immediate surroundings of the museum, I didn’t really find worth-mentioning eateries, but with a short walk, you will find a few restaurants around the Trevi Fountain you might want to check, such as Baccano for good food, a large and very comfortable ambiance, albeit a little pricey, or the casual and more affordable Aromi Bistrot in the same Via Quattro Novembre 137/M-138.

If you are up for a casual but lovely meal, balanced and healthy, head up Via del Corso towards Piazza del Popolo and turn right on Via Borgognona to grab a table at Ginger Sapori restaurant. If you have time for some extra walk, try your luck at Armando al Pantheon, one of Rome’s best restaurants serving delicious Roman traditional dishes.