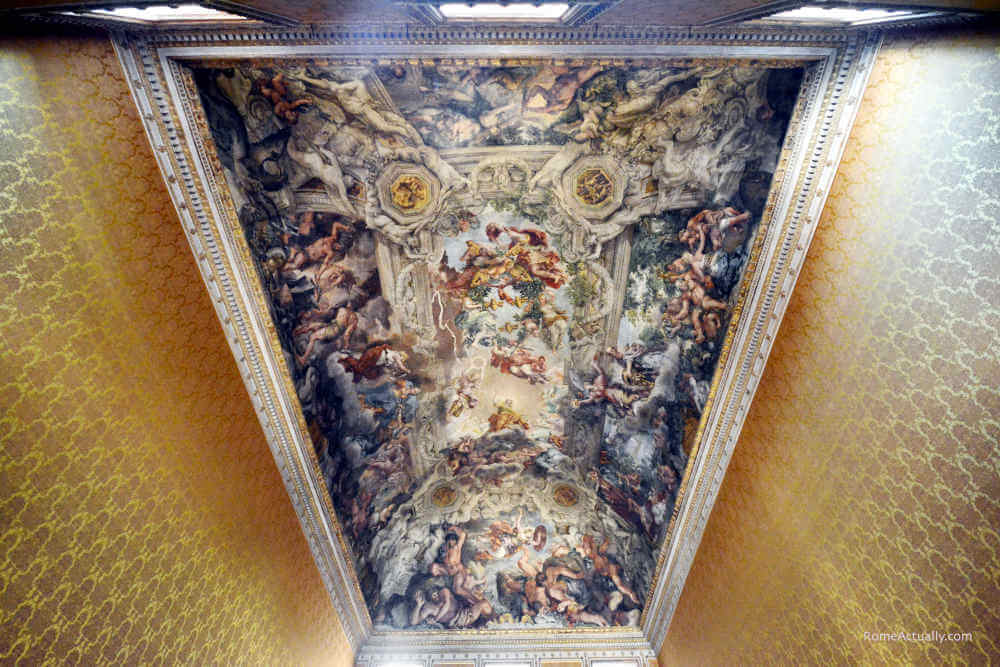 Even though located in the very heart of the city, Palazzo Barberini doesn’t attract, in my opinion, as many visitors as it deserves. A sublime example of Italian Baroque architecture, the noble palace is the collaboration of three of the main architects of the 17th century: Carlo Maderno, Gian Lorenzo Bernini, and Francesco Borromini.

The palace became a seat of the Galleria Nazionale di Arte Antica in 1953, joining Galleria Corsini in Trastevere (Via della Lungara 10) which was such since 1895. Today, strolling the halls and corridors of Palazzo Barberini, you can view masterpieces dating between the 13th and 18th centuries.

Between family rows that caused the first scattering of the private collection and the royal decree in 1934 allowing noble clans to sell the masterpieces they owned, including to foreign buyers, the artwork on display at Palazzo Barberini has little left from the original collection of the Barberini family. The majority of the artwork dates to the 16th and the 17th centuries with masterpieces by artists of the likes of Raphael, Tintoretto, Caravaggio, Bronzino, Gian Lorenzo Bernini, Guido Reni, Guercino, and Pietro da Cortona.

Admittedly, this is not a landmark you are likely to include on your bucket list if you are staying in Rome for only a day, even if you are only seeing the city center. However, if you are spending three days in Rome or more, I definitely suggest carving one or two hours visiting this beautiful Rome museum steeped in history.

The powerful Barberini clan didn’t actually originate from Rome but was a wealthy family from Tuscany known under the name “da Barberino”, later changed when the forefather, Antonio Da Barberino, father of the future Pope Urban VIII, moved to Rome in the 16th century.

To build what is now Palazzo Barberini, Pope Urban VIII bought Villa Sforza from the namesake noble Roman family and commissioned its revamping to the leading architect Carlo Maderno. Instead of flattening the existing aristocratic abode, Maderno built another wing and connected them through a central corridor giving the building the unusual H shape.

Palazzo Barberini’s history is also linked to the eternal rivalry that saw the two genius artists of the 17th century, the diplomatic Bernini and the whimsical Borromini, working side by side while constantly bickering and competing with each other.

Around mid 18th century, the last apartments in Rococo style were built on the last floor where the family lived until 1955.

What to See in Palazzo Barberini

A huge collection of artwork that includes paintings, sculptures and architectural marvels, take a stroll to see some representative Italian and international masterpieces. Here are some of the most famous.

What to See near Palazzo Barberini

You are in the heart of the city but somehow far from the crowd that barely lets you walk, so take advantage and visit some of the

Where to Eat near Palazzo Barberini

Being this a busy area in the city center, there is always the risk to stumble on tourist menus and quality. Here are some of the best places to eat after your tour of Palazzo Barberini.