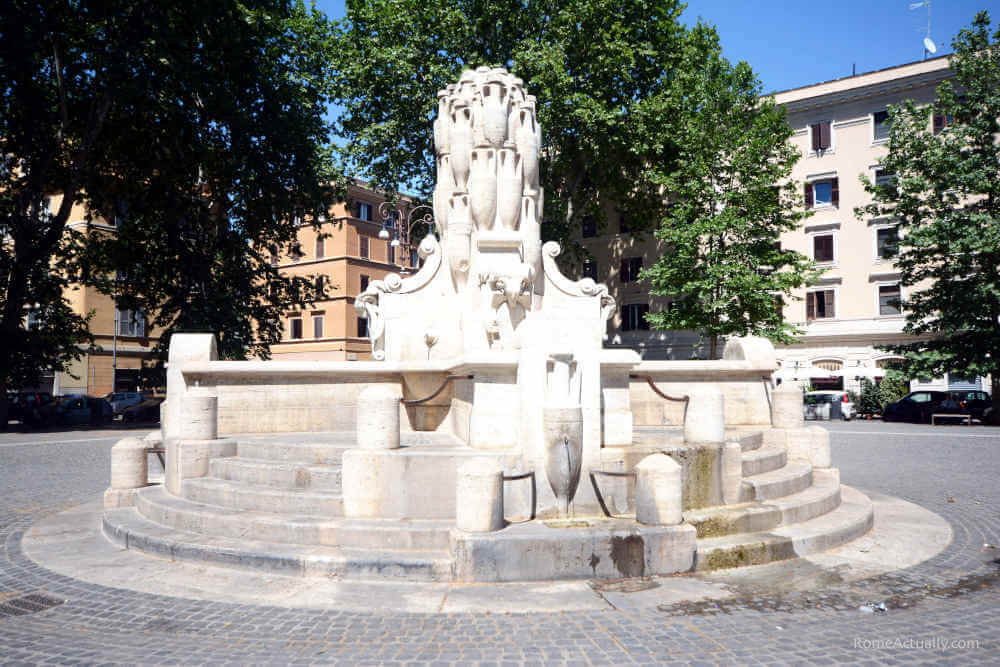 Let’s be honest here, the Testaccio neighborhood is not nearly as pretty as Rome’s Centro Storico. Forget the Baroque fountains and Renaissance buildings, the monumental domes and the wonderful paintings that legends like Michelangelo, Bernini, Borromini, Raphael, and Caravaggio left us in the historic center.

Testaccio is a fascinating working-class area that proudly puts on display the most authentic side of Rome. Be it through its hearty Roman dishes or no-frill architecture, if you are looking for the city’s folk vibe, you are in the right place.

With our simple yet complete Testaccio guide, we strive to show you the true spirit of this traditional neighborhood and the most authentic side of Rome.

While it might not be next to Piazza del Popolo, the Testaccio neighborhood is very close to the city center. Pleasant to reach on foot, it’s also well-connected via bus, tram, and Rome metro.

Make sure you check out our exhaustive guide to Rome public transport.

History of Testaccio in Rome

Testaccio is a very ancient neighborhood and the thousand-year-old relics are the proof to that. The diggings that shed light on the local archaeological ruins starte quite recently. It was only in 1868 that Pope Pius IX gave permission to archaeologist Pietro Ercole Visconti to start digging while they were building the new working-class neighborhood and the new slaughterhouse, today the ex-Mattatoio.

The main relics from ancient Rome came to light during the construction of a district made for the working class with large blocks of flats and compounds destined to the workers of the nearby Ostiense area.

The neighbourhood of Testaccio was named after “Mons Testaceus”, Latin for “Mount of Shards”, a manmade hill formed by the fragments (testae) of the oil jars (amphorae) gathered in four centuries. This happened from around 140 BC to 251 BCE when the horrea (storage) in the Ostia Antica port make the role of Testaccio port less pivotal for the city.

Originally, the port that supplied foods to Rome was near Tiber Island, but in the 2nd century BC it was moved to Testaccio because the old port wasn’t enough anymore due to the increasing trades. This is how Emporium (the port) and several storage buildings such as Porticus Aemilia and Horrea Galbana were founded.

It’s believed that Monte dei Cocci is made of millions of jars fragments. This was made possible only by painstakingly organising each piece.

With the end of the Roman Empire, the port Emporium and the whole area was abandoned. During the Middle Ages, the Testaccio neighborhood was mainly an area for farming, agriculture, and vineyards.

Since the 17th century, the Protestant Cemetery has been established as the burial place for the non-Catholic foreigners who lived in Rome. Not far, the area right next to the Mount Testaccio was used for religious festivals until the 18th century.

Between the 17th and the 18th centuries, all around Testaccio, Romans built the caves for the production and storage of the wine. With time, these places started to become local osterie and trattorie, giving the neighborhood its distinctive trait of the place to go to find the traditional “cucina povera” meals.

The Testaccio neighborhood how we see it today started taking shape with the urban planning of 1873 and the building of houses for the workers as well as factories. The plan included also the new slaughterhouse designed by Gioacchino Ersoch to replace the old one near Porta del Popolo.

The definitive layout of Testaccio neighborhood was given between 1908 and 1930 with the addition of institutional buildings such as schools, the local post office, a fire station and the church of Santa Maria Liberatrice. Important public spaces were also realised, including Ponte Sublicio bridge and Campo Testaccio soccer field.

Rione Testaccio neighborhood was officially established on December 9th, 1921 and is the 20th Roman district.

Testaccio borders northwest with the Tiber river and has the Aventine Hill on its northeastern side and the Aurelian Walls and Ostiense on the south.

This is an easy map of the main highlights in Testaccio. It doesn’t want to be a strict itinerary, just a handy map to spot the places to visit quicker.

How to reach Rome’s Rione Testaccio

Being well-connected via public transport and not so far from the historic center, it’s very easy to reach the Testaccio neighborhood.

If you are in Trastevere, Ostiense, or the Aventine Hill, you can easily reach Testaccio on foot.

From Trastevere, you just need to cross one of the bridges, Ponte Sublicio near Piazza di Porta Portese to Via Marmorata, or Ponte Testaccio to Lungotevere Testaccio and the ex-Mattatoio.

Ostiense is one of the neighboring districts, so you just need to cross Via delle Conce to Piazza Vittorio Bottego and you end up in Via Nicola Zabaglia flanking the Protestant Cemetery.

The Aventine Hill, too, is a bordering neighborhood and sits on the other side from Ostiense, on the side of Via Marmorata. Just get off the hill from the Malta Keyhole, the Garden of the Oranges, and the maze of little alleys, and you will be in Testaccio.

Testaccio is also reachable on foot from the Circus Maximus in some 20 minutes. So, if you get up bright and early and don’t mind taking a good walk, you can get to Testaccio on foot also from the Colosseum.

Many buses stop in Testaccio.

From the Esquilino area you can take bus 3NAV that goes through the Colosseum, the Aventino, runs through Via Marmorata, and then continues to Trastevere.

Bus n. 23 goes from Piazzale Clodio in Prati all through Trionfale (near the Vatican), Trastevere, then crosses the bridge ending up in Via Marmorata. It runs through this large road in Testaccio and proceeds to Ostiense.

Bus n. 30 connects the southern EUR district to Prati running through the city center. So, if you are taking it in Prati, you will run through many stops in the historic center before reaching Testaccio and then proceeding to Ostiense and EUR.

Buses 170 and 781 run through Lungotevere Testaccio. 170 connects Testaccio to Termini station, while 781 to the city center on one side and Magliana on the other.

The closest metro stopping in Testaccio is Piramide. Running on line B (blue), Piramide is at the very border between Testaccio and Ostiense. This is the metro stop linked to the Ostiense train station.

In fact, getting off the train, you can get to Piramide either from inside or outside the station. If you reach from outside, get out of the train station from the main exit in Piazzale Ostiense.

Make sure you read our guide to the Rome metro.

The closest train station to reach the Testaccio neighborhood is Ostiense, one of the main railway hubs in Rome. Ostiense is connected to other large stations such as Termini, Tiburtina, Trastevere, San Pietro, and Roma Tuscolana.

From Ostiense, you can reach Testaccio with a short walk and you can also take the metro (Piramide) and several buses from the main exit on Piazzale Ostiense.

Check out our extensive guide to Rome’s public transport.

If you are driving in Rome, keep in mind that Testaccio is ZTL at night between 11 pm and 3 am on Friday and Saturday, unless they are holidays.

Getting around the Testaccio neighborhood

The Testaccio neighborhood is not huge. If you spend one day or half a day exploring it, you can do it all on foot. All the landmarks worth a stop are close to each other so, even if you want to skip one and move on to the next one, the walk won’t be too long.

The same applies to Mercato Testaccio, another place worth a visit in the neighborhood and easy to walk to from both the Protestant Cemetery and the ex-Mattatoio museum center.

To get around Testaccio I don’t suggest taking a bus because it would really mean taking it for a stop or two since places are so close to each other. You can use public transport when you are done and need to go to another area.

Don’t miss our handy guide to the best things to do in Testaccio.

Where to eat and drink

Being a traditional area of Rome, in Testaccio, you can expect plenty of authentic Roman dishes and restaurants. Some of our favorite eateries here are Felice a Testaccio, a historic restaurant famous for its hearty fares such as tonnarelli cacio e pepe, amatriciana, saltimbocca alla romana, and coda alla vaccinara. Among the other historic places to eat are Angelina a Testaccio (Via Galvani 24a) and Flavio al Velavevodetto (Via di Monte Testaccio 97).

If you prefer something more contemporary and light, you can opt for Piatto Romano (Via Giovanni Battista Bodoni 62) or 100% Bio (Piazza di Porta San Paolo 6/a) for a buffet format. While if you are in the mood for a quick meal to have on the go, either Trapizzino or one of the street food stalls of Mercato Testaccio will deliver.

Testaccio neighborhood is a lovely area to stay in Rome. Due to its position and that it’s well served by public transport, I think booking your hotel in Testaccio is a very good option: you will be centrally located and in a nice neighborhood.

Some of the nice hotels in Testaccio include Seven Suites, a modern guesthouse in the heart of the area, and Le Tre Sorelle a Testaccio, a cozy B&B with great views of the Aventine Hill.

Make sure you read our guide to the best neighborhoods to stay in Rome and to the best hotels in Rome.