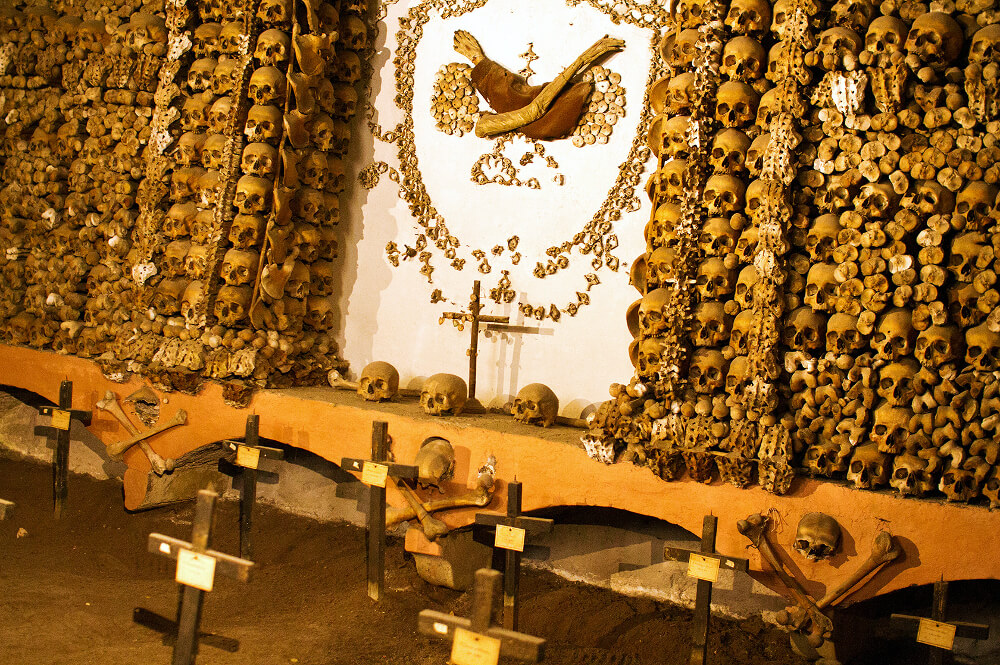 One of my favorite tours in Rome is the one I took with Take Walks where we explored what lies beneath the surface of the Italian capital. Our Rome underground tour brought us to the most ancient times of Roman civilization.

One of the best underground Rome tours, we had a diverse range of experiences below street level. We explore paganism in a Mithraic temple and saw ancient alleys. And we visited some of the crypts and catacombs in Rome to explore the early stages of Christianity.

First stop of our Rome underground itinerary: the Capuchin Crypt

Every time the council plans new diggings, be it for the new metro line or for a shopping mall, a new piece of underground Rome is brought to life. This is why I took the fascinating Rome crypts and catacombs tour and explored a small part of what hides beneath the present-day surface.

Taking one of the underground Rome tours helps you delve deeper into life in the imperial age.

Our tour kicked off at the Capuchin Crypt in Via Veneto, also called Bone Chapel and sometimes wrongly referred to as the Capuchin catacombs in Rome.

In the crypt, you can visit both the museum and the crypt itself. The museum is a collection of objects and documents related to the Capuchin order. You will admire their vestments and paintings, and right after that, the famous crypt.

Built close to Palazzo Barberini, beneath Santa Maria della Concezione church lies a small cemetery. Here the Capuchin friars used to bury their dead by creating a real art masterpiece with the bones of the exhumed monks. Each of the five small side chapels bears its own theme, be it Time or Justice. The first chapel displays a rather creepy message: “What you are we were, what we are you will be”. Pretty straightforward.

Containing, or better decorated with, the bones of almost 4,000 friars who died between 1528 and 1870, the year when Rome was annexed to unified Italy and the new government started forbidding the amassing of the bones for hygienic reasons.

Apart from all types of bones (skulls, thighs, pelvises, tibias), the crypt houses also the mummified bodies of some of the friars with their own garments on, and the full skeleton of princess Barberini, who died as a child, displayed holding a scythe in her right hand and a scale in her left hand. The path is utterly fascinating and grotesque, so much that even the notorious Marquis De Sade felt intrigued by such a macabre composition.

Less spooky but equally fascinating, the next stop on our Rome catacombs tour was Priscilla Catacombs near Villa Ada, a fantastic Roman archaeological site. This is truly a maze of underground tunnels where Christians and martyrs were buried. Most spaces are now empty, but some are still closed and with their original bones inside. In one of the best catacombs in Rome, you will also have the chance to admire beautifully preserved frescoes and what is considered to be the very first image of the Virgin Mary.

Travel through the dark and humid tunnels of early-Christian burial sites to learn about the faith and the art of the first centuries of Christianity in Rome.

Built between the 2nd and 4th centuries on the site of older graves belonging to the Acili Glabrioni family. A Member of this aristocratic clan was Priscilla who is believed to have donated the land to dig the catacombs.

Among the best catacombs in Rome, here, you will witness a 1700-year-old archaeological treasure.

Click here for details and the current price for this Crypts, Bones and Catacombs Tour of Rome.

For as much as we had seen so far, what proved to be the very highlight of the tour was our next and last stop, San Clemente Basilica near the Colosseum.

Apart from the present-day basilica itself, beautiful needless to say, at about 4 meters below street level we visited the early Christian basilica dating back to the 4th and the 5th centuries.

Descending yet another staircase, we arrived at about 10 meters below the current street level to visit the 1st-century building that was turned into a Mithraeum in the 2nd and 3rd centuries.

The seat for a Persian pagan cult of the god Mithras is a beautiful example of foreign cultural influence adopted by the Romans. Not only can you see the Mithraeum, but also a Mithraic school, a building that is believed to be the Roman mint, and a narrow passageway dating back to imperial times will unfold before your eyes.

As San Clemente Basilica became very popular and crowded, Walks of Italy decided to replace this stop with San Nicola in Carcere church, home to a beautiful crypt.

Defined as a “lasagna church” for its many historical layers, San Nicola in Carcere was built on the site of three temples that in the Middle Ages were used as a prison. All around the temples, there was the veggie market making the local square a central hub for daily chores and spiritual life. Here, your Rome crypt tour will continue as you will visit a crypt dating back to the 12th century where they used to practice exorcism rituals. An extremely interesting and not-so-common site to include in the underground tours of Rome.

In this Rome underground tour, you will travel in a private car to easily reach all the destinations. The expert guide will give you plenty of history and anecdotes on these important Rome landmarks to further enrich your experience.

What exactly is the Colosseum underground? In a nutshell, it served as a backstage, where men and animals waited for their destiny and potentially last show. This is a great excursion you can take underground Rome to view the old architectural features of the city’s symbol landmark as well as how the organizers arranged the seating area. Booking a private tour is the only way to visit the Colosseum underground and third ring.

» Click here to book this skip-the-line Colosseum underground tour that includes also the Roman Forum and the Palatine Hill. For more ambiance and silence, you can also book the same VIP visit as a night tour when it’s beautifully lit up and not crowded anymore.

The Domitian Stadium underground in Rome

Located right beneath the world-famous Piazza Navona, the Domitian Stadium is a relatively recent discovery. Opened a couple of years ago, this is a very exciting discovery history buffs would love. A stadium ordered by emperor Domitian for Greek-style games as an alternative to the gory shows of the Colosseum, I visited shortly after they opened their doors.

The landmark is now included in several Rome guided tours and I suggest taking one to learn about the sports and leisure time in ancient Rome as well as seeing the sculptures and beautiful architecture of its entrances and dug areas.

» Booking this tour you will visit also other underground sites, while this one will just buy you the ticket for the Domitian Stadium.

Rome underground tours at the Houses of the Celio Hill

The one on the Caelian Hill is one of my very favorite underground tours of Rome. I took it years ago, visited the ancient houses (domus and insula), and tasted a Roman aperitif with recipes taken from old historical books.

In this Rome underground tour, you will see ancient mosaics and frescoes, you will learn about the old Roman architectural style for both wealthy and working-class dwellings, as well as how old shops were organized.

The city is home to several early Christian burial sites, and the San Callisto catacombs in Rome are some of the largest and most popular. Built around the 2nd century, they are located in the Appian Way. Here, dozens of Christian martyrs, popes, and citizens are buried. These are definitely some of the best catacombs to visit in Rome.

» You can book this nice tour to bike along the Appian Way, the Aqueducts, and visit St. Callixtus Catacombs.

As the Walks of Italy tour that I took switched San Clemente with the lesser-visited San Nicola in Carcere church, I suggest you still visit this wonderful basilica to see the different layers of Roman history.

» You can do this by yourself or book one of the many Rome underground tours that include it like this one.

While it’s well-known that from St. Peter’s Basilica you can access the crypt for free through a small door, many might ignore that yet down another layer of history there is an important necropolis.

The location of a circus is believed to have been the place where St. Peter was martyred after the 1st-century fire Christians were wrongly accused of causing. Here is also the tomb of Saint Peter, and you can do the Vatican underground tour with prior booking.

Check out our extensive guide for more info on the best things to do in Vatican City.

Why take a Rome crypts and catacombs tour or Rome underground tour?

There are so many things to do and places to visit in Rome that you can hardly see everything on your first trip. However, often travelers don’t go beyond the most obvious and famous Rome landmarks such as Piazza Navona and the Spanish Steps. Apart from the city’s hidden gems, there is a whole world to discover beneath the surface.

With an underground Rome tour, you will discover learn some of the historical facts often unknown to most travelers. Explore the early days of Christianity, when Christians were persecuted before Constantine’s edict in 313, and see where they buried their dead and celebrated their functions.

Don’t miss to devote at least one day to touring underground Rome, it hides fantastic sites that show how life was in ancient times. There are countless places to visit beneath modern-day street level in Rome, and visiting some will be an unforgettable experience.

» Now it’s also possible to do the underground tour of Rome at night with the exclusive after-hours access. Click here for the latest price and information on this fascinating night tour!