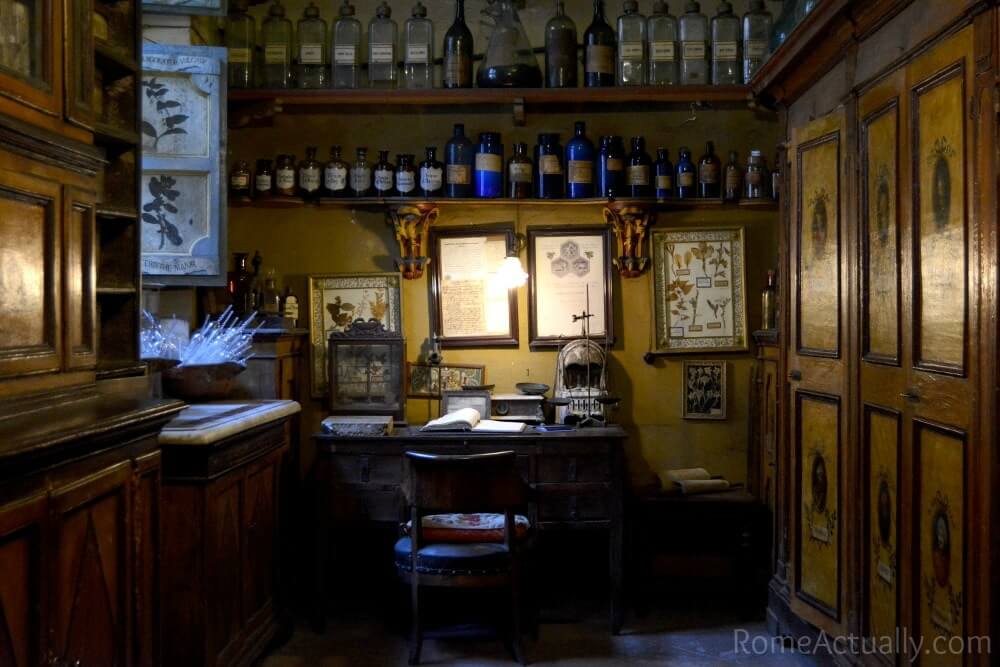 One of the hidden gems in Rome and in the Trastevere neighborhood, the ancient pharmacy Santa Maria della Scala (known in Rome as Antica Spezieria di Santa Maria della Scala) has been serving customers and healing patients from the 16th century up to 1954. This was the year when the friars who were managing it stopped growing their own herbs and spices in the backyard of their monastery.

I’ve been passionate about digging into Rome’s offbeat treasures and I can’t even begin to list how many I have and I keep discovering. But I have to say, the ancient pharmacy Santa Maria della Scala, silently tucked away in a corner of a popular, touristy neighborhood, was a real gem.

Chances are you are going to visit Trastevere whether you are staying in Rome for two days or longer. Visiting the ancient pharmacy of Santa Maria della Scala won’t take up too much of your time but will definitely add great value to your trip.

Located on the first floor of the ancient monastery, just like back in the days visitors are welcome to the pharmacy Santa Maria della Scala by a friar, a Discalced Carmelite, who introduces them to the world of old drugstores, herbs, potions, unguents, balms, oils, clay and any type of raw material as their philosophy was that anything that was created can be used to heal the human being. In a nutshell, they were making precious use of the natural remedies we have gradually lost and that we are gradually trying to get back to (yours truly included).

The Discalced Carmelite friars reached such a high level of expertise in the study of botany, chemistry, and medicine that they were appointed as the “pharmacy of the Popes”. In the back, you can also visit what seemed the “office” of the pharmacy, where the registry was kept together with shelves of jars containing potions and herbs, as well as cabinets of remedies devoted to the biggest scientists of history, including the Persian Avicenna.

As soon as you step over the gloomy threshold, you are whirled back to centuries ago and almost can smell some of the lotions the friars used to prepare for themselves, the Popes and also the ordinary people since the end of the 17th century when it was open to the public.

From chest infections to allergies to rheumatic disorders, the old pharmacy Santa Maria della Scala, equipped with labs, sterilizing machines and stocks of all possible remedies and wisdom coming also from the Orient, treated it all. Being the drugstore of a monastery, alongside worldly medicine, the friars didn’t miss to point out, right at the entrance with a sign in Latin, that the real cure comes from the Lord’s word.

The fate of this ancient pharmacy and hospital is strictly linked to the main historical events the city of Rome witnessed, including the battles between the Roman Republic and the French Army that took place mid 19th century. It’s here that Milan-born politician and fighter Luciano Manara died from the injuries of rifle shots when he was fighting against the French. From the 18th century, friar Fra Basilio turned Santa Maria della Scala pharmacy into a place of study so that more people could learn about the properties and use of herbs, plants, and remedies.

Gradually, the Vatican decided that this ought to be the pharmacy for everybody, not only the noble families, because it was close to the Tiber river, back then prone to floods that made the whole area marshy, hence causing plagues that decimated the population. Medicines were very much needed among the ordinary people so this became also the pharmacy of the poor distributing drugs and remedies for free to the needy.

In 1870 Rome became the capital of the Italian Kingdom and many goods of the Discalced Carmelite friars were confiscated, monasteries included. Santa Maria della Scala monastery became a kindergarten and the old pharmacy shifted from the Popes to the royal family, becoming Europe’s oldest pharmacy.

This ancient health sanctuary is truly a hidden treasure in the heart of Rome, hidden because it’s very easy to miss its little entrance door, but mercifully located in one of the most popular neighborhoods, Trastevere. So if you are staying for three days in Rome or more, this is definitely one of the places to visit in the Eternal City.