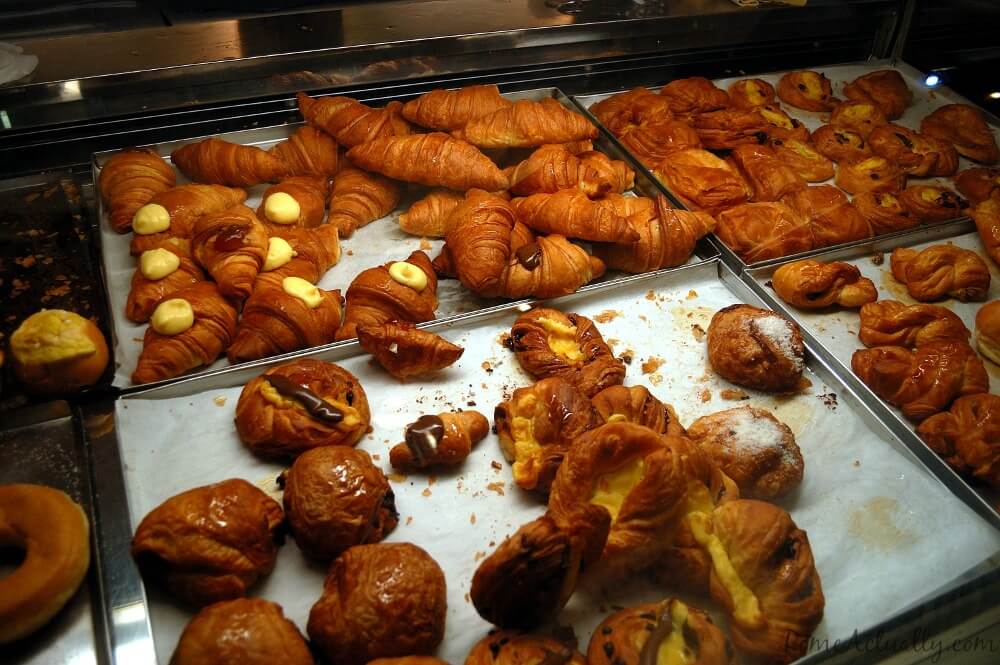 Why do we travel? Landmarks, palaces, artwork, all great reasons, but when we want to experience authenticity, what do we think of? Food, of course. I took a food tour in Rome and discovered Roman cucina povera in the trendy Testaccio neighbourhood.

Let’s face it, Italy’s culinary tradition isn’t famous worldwide for nothing. A while ago I joined a tour organized by Eating Europe in the Testaccio neighbourhood and discovered new places for breakfast, brunch, and lunch.

Click here for more details and prices of the tour I took.

Wine and food tasting tour in Rome around Testaccio

Taste of Testaccio walking food tour in Rome, led by Luna, started at 41, Via Marmorata for a proper Roman breakfast.

Here, we had a taste of delicious cornetti (croissants) and tiramisu.

Tiramisu is not exactly breakfast material, but rather a dessert. However, since we were there, we all gladly agreed not to miss the occasion for such a sweet treat.

Some cultural sightseeing during our Roman gastronomy walk

This is how the first part of our culinary walk around Rome’s Testaccio neighbourhood introduced us to some of the street-food-type eats, cheese and cold cuts. To make room for some more food and wine tasting, our next stops involved some fascinating sightseeing.

Before resuming our Roman gastronomy adventure, we included a stop at the old slaughterhouse and at the non-Catholic cemetery.

For as creepy as it sounds, the former slaughterhouse did play an important role in the local modern history. Built between 1888 and 1891 by Gioacchino Ersoch, it’s now considered one of the most important relics of the bygone industrial era.

More industrial archaeology in Rome can be explored in the neighbouring Ostiense quarter.

In the non-Catholic cemetery, in addition to Protestants, also foreigners, poets such as John Keats, and one of my favourite Italian philosophers and politicians, Antonio Gramsci, are buried.

After passing by former Rome soccer team field, we were off eating again. With our digestion not even halfway through, we headed to the lovely and very traditional Mercato Testaccio.

This busy daily market sells all types of seasonal produce and gourmet food.

Here, our tour leader explained some of the seasonality you can find in Italy. So if you book the Rome food tour in summer, you are likely to find watery and fresh produce like zucchini, eggplant, tomatoes and bell pepper.

If you travel to Rome in winter, it will be a feast of all types of cabbage, cauliflower, turnips, apples, pears and “warmer” goods.

With our new fruits and veggies culture, the time had come for some more food tasting in Rome. We were offered a delicious sample of Caprese salad made of mozzarella, tomato and fresh basil, and a bruschetta al pomodoro, toasted bread with fresh tomato on top. Before leaving, we also managed to try some cannoli, a typical Sicilian dessert.

The visit to the market came a little as our starter for the proper lunch. Now, I know what you are thinking, after all we ate throughout the morning, did we have the nerve to keep eating? Yes, as a matter of fact, we did.

Our next stop was traditional Roman restaurant Flavio Al Velavevodetto roughly translating into Flavio I Told You So (97, Via del Monte di Testaccio).

As a proper Roman eatery, here, we had a mouthwatering sample of three of Rome’s most popular first-course dishes. We started with pasta cacio e pepe (pasta dressed with pecorino cheese and a generous sprinkle of black pepper), followed by amatriciana (tomato sauce with guanciale, cured pig cheek), and the unmissable carbonara (sauce made with crunchy pan-fried pancetta, eggs, pepper and pecorino cheese).

Now, being Italy, could we round off a meal without a proper dessert? After enjoying our pasta for lunch, we headed to Giolitti (35, Via A. Vespucci), which is not the same Giolitti you will find near the Pantheon. I picked the dark chocolate flavour and topped it with the exquisite fresh cream this gelateria is famous for. Here the promise is quality, locally-sourced ingredients.

Why we liked Taste of Testaccio food tour in Rome

Apart from enjoying plenty of local delicacies, this Rome food tour gives you a chance to visit a non-touristy neighbourhood. You will experience daily Roman life and blend with locals, all while visiting some of the lesser-known attractions that will help you understand the lifestyle of this working-class district.

As for me, while I did know all the dishes we had, that day represented a precious journey into Rome’s recent past, the years, the places and the people that rarely capture tourists’ and guides’ attention.

Whether you are a foodie or just like to discover the flavours of the places you visit, I recommend taking this food tour of Rome. You will be offered a fascinating glimpse into Roman ancient and recent past as well as the traditional dishes of the so-called “cucina povera”.

Whether it’s your first time in Rome, your second or sixth, you will love your food and wine tasting adventure.

Go back home with new knowledge and also with some cool ideas of gift shopping to surprise your family and friends!