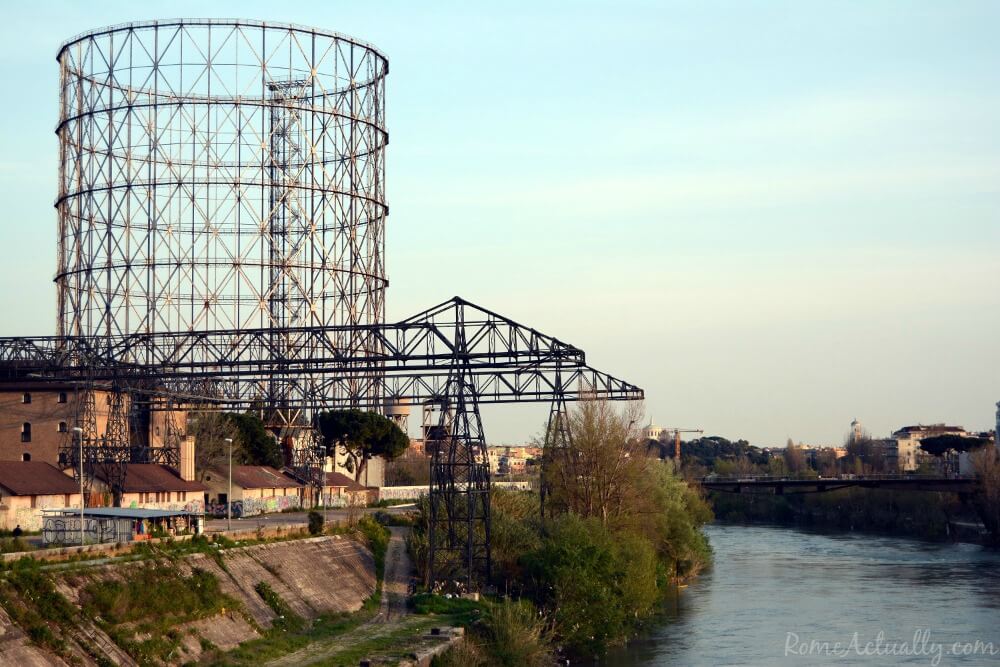 The district aimed at serving the industrial reality of Rome, Ostiense has a great wealth of things to see and do and great places to eat. The quarter was created in the early 20th century as the first industrial district of the city and shows the fantastic relics of Rome’s industrial archaeology. The urban planning of 1909 when the local municipality was ruled by mayor Ernesto Nathan created a production-industrial zone in Ostiense. The area was ideal for mainly two reasons: it was close to the Tiber, back then an important way of transport for goods, and the working districts of Testaccio and Garbatella.

Buildings such as the main power plants, a series of gasometers, military stations, warehouses, and factories made it the symbol of modernity and entering the new era. Today, these buildings are either abandoned, occupied, or turned into something else, like the Centrale Montemartini, a great example of giving new value to the dismissed power plant.

A stone’s throw away from central neighborhood Testaccio and the non-Catholic cemetery, located between the Aurelian Walls and the banks of the Tiber river, today Ostiense is where to go to see another side of Rome far from the ancient vestiges of the Roman Empire.

What are the main relics of Ostiense industrial archaeology?

Managed by Eni, the Italian gas and oil company, the old, dismissed gasometer of the Ostiense district is a relic of Rome’s industrial past. Obviously not in use anymore, the local council has been trying for years to revive the area and the same former gas holder.

Revamped with colorful and fluorescent lights, the gasometer has had for a couple of consecutive years the task of re-launching Roman summer nights with parties, concerts, exhibitions, evenings washed with Italian aperitif moments. All kinds of street performances take place right on the banks of the “Biondo Tevere”, the Tiber that never fails to bedazzle tourists and locals alike for its beautiful reflections, from whatever angle you look at it.

The gasometer is a real piece of Rome’s industrial glory, a gigantic stylized figure somehow out of place in the district that has been going through a heavy gentrification process.

Dating back to the Mussolini era, Ostiense old gasometer is occasionally called the “modern Colosseum” after Turkish film director Ferzan Ozpetek declared in an interview that a small walk around that “wonderful industrial Colosseum is enough to give him peace of mind.”

Actually, the gasometers in Rome are three, the first two being the small ones and dating back to 1910, while the biggest and most famous one appeared in the official records on June 28th, 1935.

The works for this long complex along Via Ostiense started in 1913 and the General Markets were inaugurated in 1922. In origin, there were two distinct areas, one for fresh fruits and veggies and one for meat, fish, and eggs.

Apart from being close to the Tiber and having easy access from the nearby river port, Mercati Generali was also next to the railway and line Rome-Ostia which was officially launched only two years later in 1924.

The place for the large markets and also local traditions, Mercati Generali of Via Ostiense was shut down in 2004 and transferred to the Tiburtina area, making this a fantastic relic of Rome’s industrial archaeology.

History buffs shouldn’t miss the fascinating Centrale Montemartini Museum established in the old power plant where all the original machines and engines are still kept.

Divided into two floors and several rooms, you can see all the machines for the production of electricity standing close to Roman and Greek classic sculptures transferred from Musei Capitolini.

Ponte dell’Industria, Italian for Bridge of Industry, also called Ponte di Ferro (Iron Bridge). 131-meter-long, it was created to connect Termini station to the railway to Civitavecchia and was inaugurated in 1863 when Rome was under the rule of Pope Pius IX.

At the time of its construction, it was the longest drawbridge in Europe. As part of the urban master plan of 1909, it was open to the traffic of cars and vehicles.

One of the main building complexes in Ostiense is one of the Magazzini Generali, the Italian for General Warehouse. They are located in today’s Via del Commercio and were the first main settlement of Nathan coalition leading Rome in the early 20th century and making Ostiense the new, big commercial and productive heart of the city.

The building was created to host huge stockrooms for all types of goods, but the 70-year activity of the Società Dei Magazzini Generali hasn’t always been bright, especially during the two world wars.

The business ended around the 1960s-70s and after a period of neglect, in 1984 the society was shut down. The majestic building now hosts the Istituto Superiore Antincendi, the fire prevention institute of the Interior Ministry.

Walking all around the gasometer, you will also end up in what looks like “Little Manchester”. And not only when it’s rainy and cold, but because the brick walls are the main feature of the local architecture style, very much British, reminiscent of the atmosphere of the Industrial Revolution. These are the buildings of the factories of Società Prodotti Chimici, Colle e Concimi Mira Lanza.

They are not the only ones though. All around the district you can see the abandoned buildings of former factories and stores such as the historic fish shop Pescheria Ostiense in Via del Porto Fluviale or the Blasi wood factory in Via delle Conce, now abandoned and displaying the murals of the Ostiense District urban art project on their exterior walls.