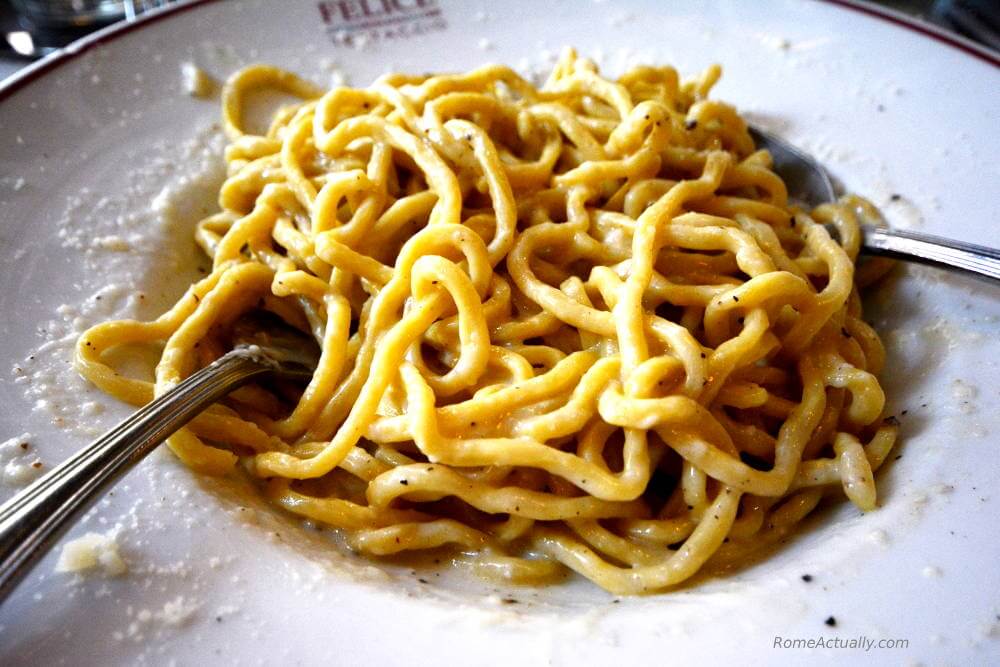 When in Italy’s capital, I assure you, you don’t want to leave before enjoying a hearty dish of tonnarelli cacio e pepe at Rome’s historic restaurant Da Felice a Testaccio.

If you want to explore the flavors and recipes of Roman traditional cuisine, Felice a Testaccio is definitely one of the best restaurants in Rome.

A traditional trattoria in a traditional Roman neighborhood, it was founded in 1936 by Felice Trivelloni, who took over the old-style osteria of his father Guido, where you would only be served to drink and the food you would bring it yourself.

Back in 1936, Testaccio was not a wealthy area of Rome, but it definitely has always been an authentic one. Now, it’s a hip neighborhood, full of restaurants, bars, gelaterias, nightclubs, and shops and boasts a fair share of attractions from old and modern history.

Felice a Testaccio is still run by the same Trivelloni family who carries on with the tradition of both their neighborhood and their ancestors.

READ MORE: To discover traditional recipes and learn how to make them, take one of the many great food tours in Rome!

Our experience, what to order and how to reach Felice a Testaccio traditional restaurant in Rome

Lunch at Felice a Testaccio, our experience

I admit we were lucky. We hadn’t booked, and we still found a little table for us. It might be because it was a weekday and probably because we were only four, but next time I wouldn’t risk it. The restaurant, very large and with plenty of seating capacity, filled minutes after our arrival.

Even though not in the immediate city center, Felice a Testaccio is very popular, hence always crowded.

Grabbed our longed-for table, we started perusing the menu. Felice is traditional in every sense of the word. Not only their dishes and cooking style have been made the old way since 1936, but also their menu calendar follows the tradition.

For example, back in the day, Thursday was the day of coda alla vaccinara, so Felice still serves it only on Thursday. On a Wednesday you will find veal shank with green peas, Friday is the day of fish dishes, and so on and so forth.

Some of the dishes are made every, like the most famous tonnarelli cacio e pepe with Pecorino Romano cheese and black pepper, spaghetti alla carbonara, bucatini all’amatriciana or saltimbocca alla romana, veal scallops cooked with cured meat and sage on top.

I ordered tonnarelli cacio e pepe because it’s one of my favorite dishes and even though very traditional and apparently easy to make, I found not everywhere in Rome they make it properly, either cheating with the cheese or just not following the right recipe. As expected, at Felice a Testaccio the cacio e pepe is outstanding. The waiter brings it to the table and mixes it in front of you for the last creamy touch. A very generous amount of high-quality Pecorino and black pepper do the trick, and what you get is a lip-smacking Roman culinary experience.

I didn’t take the main course but since it was artichoke season I opted for a side dish and had the most tender carciofo alla romana (artichoke Roman-style) ever.

My husband loved his roasted lamb with potatoes, perfectly cooked in the oven, and my parents merrily tucked into their saltimbocca alla romana and bucatini all’amatriciana, thick spaghetti served al dente in a juicy tomato sauce with guanciale cured meat.

Felice a Testaccio’s menu and prices

Felice a Testaccio is not one of Rome’s cheap eats. Especially if you add the wine, for which a bottle can go from 30 up to even 90 euro. The price of the dishes, however, are not extreme. The first course ranges from 13 to 15 euro, the main courses some 15 to 20 euro.

My cacio e pepe was 13 euro, my husband’s roasted lamb with potato was 19 euro and one of the priciest on the menu. Side dishes like salads, artichokes, sauteed chicory, or the seasonal veggie of the moment are about 7 euro.

Some of the traditional Roman dishes to try at Felice a Testaccio are bucatini all’amatriciana, spaghetti alla carbonara, pollo alla cacciatora (chicken cooked in white wine), coda alla vaccinara (beef oxtail slowly simmered in a celery and tomato sauce), lingua in salsa verde (beef tongue in a green sauce), rigatoni pajata (pasta with offal in a tomato sauce), tripe on a tomato sauce, if you don’t mind the slightly off-putting consistency (I can never eat tripe).

READ MORE: First time in Rome? See our post to discover the most famous attractions!

What to see and do around Felice a Testaccio

As the name states, Felice a Testaccio is located in the former working-class neighborhood next to Ostiense, one of my favorite areas to explore Rome’s industrial archaeology.

Here are some of the places to visit and things to do in Testaccio close to Felice:

Tips for a perfect dining experience at Felice a Testaccio

Address and how to reach Felice a Testaccio