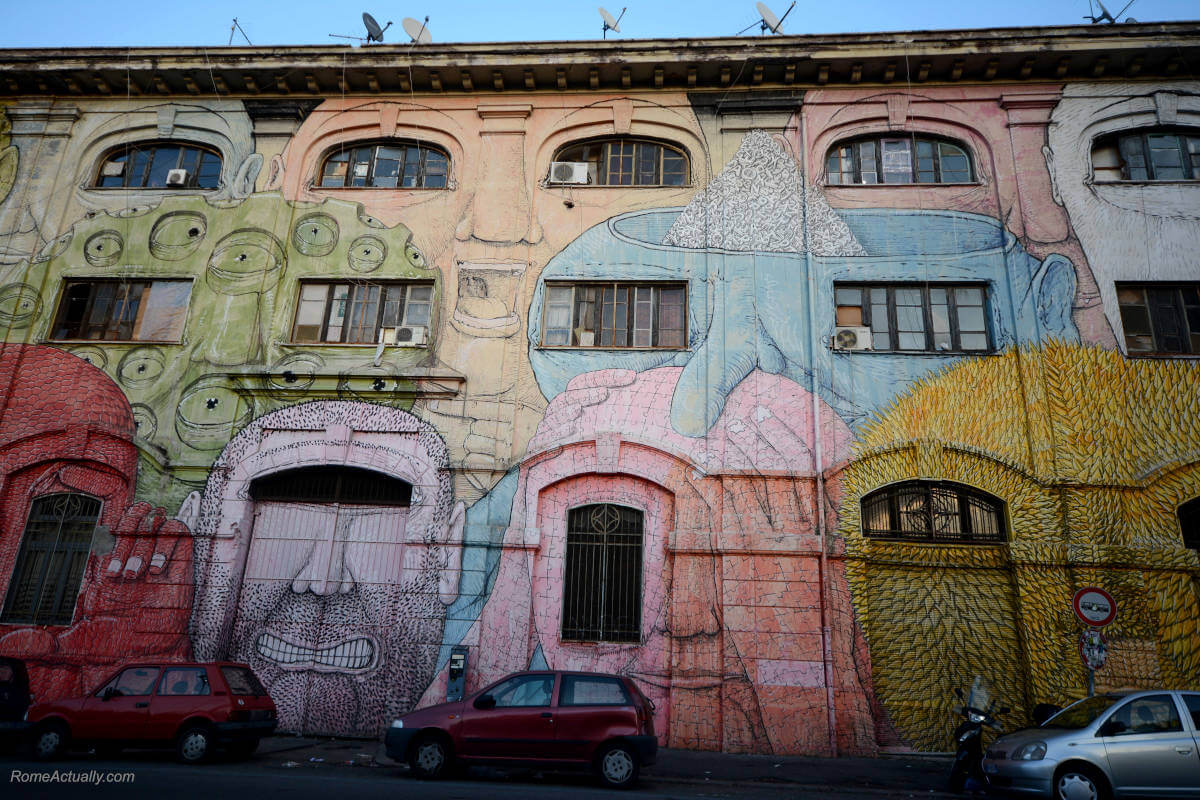 Ostiense is a cool and trendy district that has been becoming one of the best areas to stay in Rome thanks to its vibrant nightlife and places to eat. Among the things to see and do, discovering the street art in Ostiense is one of the most colorful and a great chance to appreciate Rome’s modern and contemporary artwork.

Whether you come from Testaccio or Garbatella, the two neighboring districts, you will see beautiful murals end to end. If you get off at San Paolo station of the Rome metro B line near St. Paul Outside the Walls Basilica and start walking towards the Ostiense neighborhood in south Rome, you will start seeing the local street art pretty quickly.

Let’s face it, when you wonder what to do in Rome, a street art itinerary is not exactly the first thing that will come to your mind. But it’s a pity. Of course, if you only are to spend one day in Rome or even two days, it’s totally understandable that you want to give priority to its major landmarks of ancient history, Renaissance palaces and paintings, and important churches.

However, if you are visiting Rome for 4 days, or even better, a week, the local street art will pleasantly surprise you. You can start here in Ostiense and also visit other neighborhoods that are famous for their street art projects such as Quadraro and Tor Marancia.

Make sure you read our articles on the most important buildings in Rome.

Much of Ostiense street art is laid out around the vestiges of Rome’s industrial archaeology such as the Gasometer, Via dei Magazzini Generali, and the former power plant now turned into the fantastic museum of the Centrale Montemartini.

An urban art project known by the name Ostiense District was launched in 2015 with the aim of turning what was Rome’s industrial area into a trendy neighborhood and sprucing up some old and crumbling buildings.

The Ostiense quarter was created in the early 20th century, and since its inception, it has been a lively district symbol of modernity that included the city’s first power plant, the gasometer, factories, and warehouses. All these buildings and working areas whirled Rome into the contemporary world and dusted off its fame as an ancient city.

So from its very beginning, Ostiense has retained its original charm and contemporary creativity, today defined by the post-industrial art expression of themed street art.

Where to see the street art in Ostiense

Most of the murals of the street art in Ostiense are along the main Via Ostiense road and its back streets, but the project goes from Garbatella all the way to Testaccio through Ostiense. Close to Garbatella metro station, is the mural from German artist Clemens Behr “Behind and in front of the wall”. While near St Paul’s Cathedral you can see “Opera Onirica” by the Spanish Sam3 (195, Via Ostiense), where a star-dressed silhouette is staring at a light sphere with human-shaped shadows inside.

Getting close to the Gasometer, behind Via Ostiense all along Via dei Magazzini Generali is the red, black and white “Wall of Fame” by JB Rock depicting celebrities including Dante Alighieri, Jimi Hendrix, Elvis Presley, Quentin Tarantino, Obama, and Ray Charles. One of the most famous and photographed street art in Ostiense.

At the corner between Via delle Conce and Via del Porto Fluviale is the huge mural by Blu named “I Mille Volti”, standing for The Thousand Faces, an iconic example of street art in Ostiense.

With this graffiti painted on the facade of the former station of the air force, Blu sought to address the social scourge of homeless people and abusive housing.

This large mural that runs all the way along the building in Via del Porto Fluviale continues on the sidewall of the same building where we can see a big city-ship where red men fight against grey armed soldiers. This is one of the largest and most famous works of street art in Ostiense.

In Via del Porto Fluviale is also the mural by Peruvian artist Carlos Atoche “La caduta dei giganti” made in collaboration with Mexican Luis Alberto  Alvarez. This is a beautiful colorful mural symbolizing the ephemeral nature of all human powers and the stronger resistance Nature has to face them.

Right beside Blu’s “I Mille Volti”, this 40-meter mural displays an underwater world where the statues and mythological figures look time-worn and in total opposition with the fish and other marine creatures, all represented with bright colors.

All around the neighborhood are more graffiti of the project part of the street art in Ostiense. One of the streets more filled with murals is Via del Porto Fluviale where, along with the above-mentioned works by Blu and Atoche, are also “Fish’n’kids” by Agostino Iacurci and “Nobody” by Axel Void. Behind the corner, in Via delle Conce, you can see “Planet Earth” by the Brazilian street artist Herbert Baglione on the walls of the historic factory Blasi Legnami.

On the walls surrounding the main gasometer is the long mural by British street artist Kid Acne “Paint Over The Cracks”. Made on a 100-meter-long wall in Via del Commercio in 2011, this is his first mural in Rome.

Finally, under the bridge in Via Ostiense there are the murals of the Argentinian Gaucholadri as well as unknown Italian street artists.

Where to eat in Ostiense

There are many restaurants in Ostiense where you can grab a lovely meal before resuming your sightseeing.

Two of my very favorite places to eat are Romeow Cat Bistrot, a vegan restaurant inspired by the Japanese idea of the cat cafe, and Trattoria Pennestri where they serve traditional dishes with a contemporary twist.

You can also enjoy a nice gelato in Gelateria La Romana in Via Ostiense or a tradizional maritozzo pastry at Andreotti along the same street. For a nice coffee, juice or pastry, or even a quick casual meal, stop at the lovely Angelina in Via del Porto Fluviale.