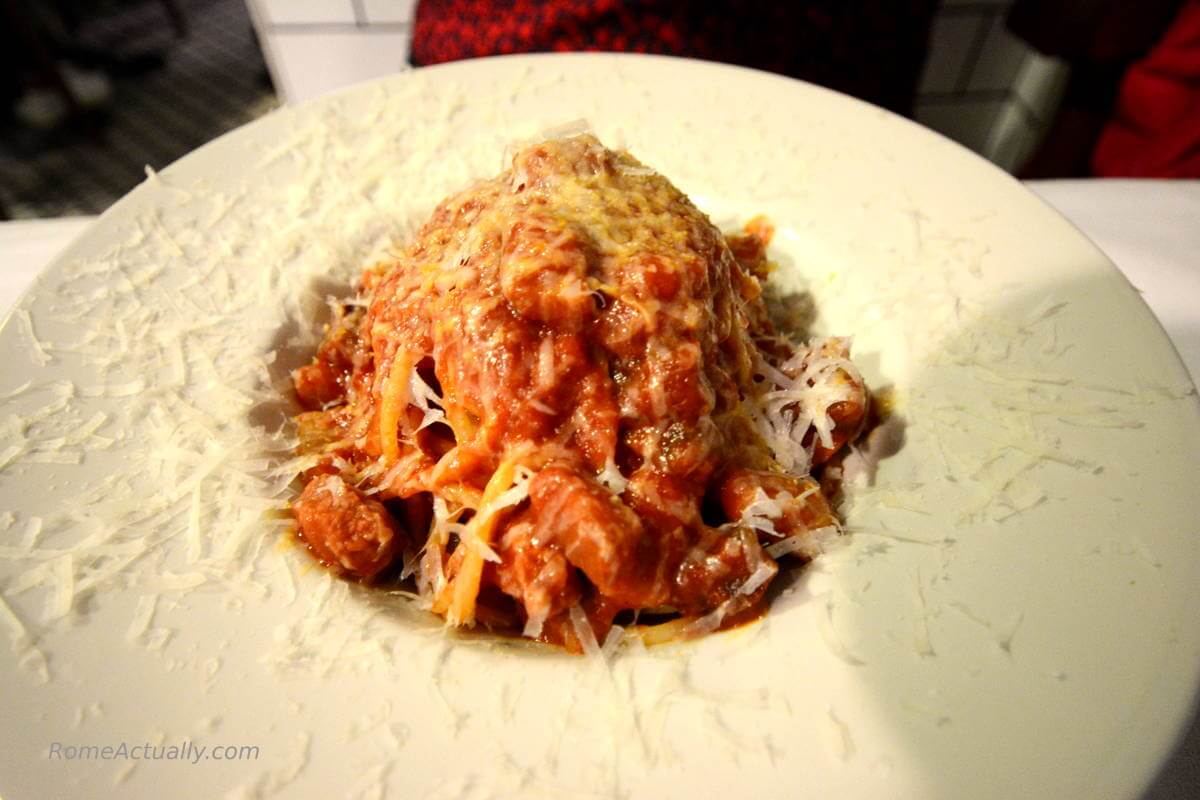 One of the favorite Roman foods, spaghetti or bucatini Amatriciana is always on the menu of traditional restaurants in the capital. Even though originally from Amatrice, a small town near Rieti, the amatriciana pasta sauce is one of the evergreen first courses in Rome all meat-eaters will order at least once during their trip. The ingredients are few and simple, this is why for the perfect result, it’s always better to choose high-quality ones.

Alongside tonnarelli cacio e pepe and spaghetti carbonara, most restaurants in Rome feature spaghetti or bucatini all’Amatriciana in their menu. Some of the best places in the city to try the traditional dish are Checchino dal 1887, Sora Lella, Armando al Pantheon, Felice A Testaccio, and Osteria Fernanda. But if you are not in Rome anymore, here is the full recipe and locals’ tips to make the perfect amatriciana at home.

The recipe itself is not long nor complicated. Being one of the dishes coming from the Roman cucina povera tradition, it really features very few ingredients and is not difficult to find. The process is so easy that by calculating the right timing, you can start by putting the water to boil on your stovetop. For the sake of clarity, especially if you are not familiar with the recipe, let’s start with the sauce.

Tips for a Perfect Result

No bacon nor pancetta!

The authentic and original amatriciana pasta sauce recipe features guanciale, so if you want to make the dish back home add this specific type of cured meat to your Rome shopping list because anything else even remotely similar you can find back home won’t give you the same result.

Even though looking similar, pancetta and guanciale are quite different types of cured meat. Pancetta is taken from the belly of the pork, while guanciale from its cheek, throat or neck. Bacon is more similar to pancetta rather than guanciale, ma it differs in many aspects.

First of all, to make bacon they can use the belly and also other parts of the pig such as the back, loin or hip. Also, the ageing is different because for the pancetta it lasts from 2 to 4 months while for the bacon only a few days, plus pancetta is fatter than bacon and seasoned with salt and black pepper, while bacon with salt, spices and sugar.

No onion, wine, and pepper

That’s pretty straightforward: even though onion is much used in Italian cuisine, the original pasta amatriciana recipe doesn’t contain any. And so is for wine and pepper.

To obtain a perfect amatriciana sauce there is no need to use olive oil. The guanciale cured meat will release and stir-fry on its own fat and that would be enough to have a moist dish but not too greasy. Adding olive oil will change the flavor and the dish won’t be the same.

If you are shopping in Rome, I suggest you buy a piece of pecorino and grate it when needed rather than buying it already grated. It will be more flavorful and fresh. Plus, for this recipe, it’s better to grate it a bit chunky and not too fine.

Shop at a deli

Preferring a deli shop over a larger chain store always guarantees better quality, hence a more flavorful result. Some great deli shops in Rome are La Norcineria di Iacozzilli in the Trastevere neighborhood, which is also a stop in the Twilight Trastevere Food Tour with Eating Europe, Volpetti in Testaccio (Via Marmorata 47), and the larger Castroni that sells quality goods from Italy and other countries.

Buy the ingredients from home

So let’s say that you are not in Rome anymore, you haven’t bought all the ingredients you need or you just finished but still want to make spaghetti amatriciana for dinner. You can find some also on Amazon, like the pecorino romano DOP here and guanciale here.