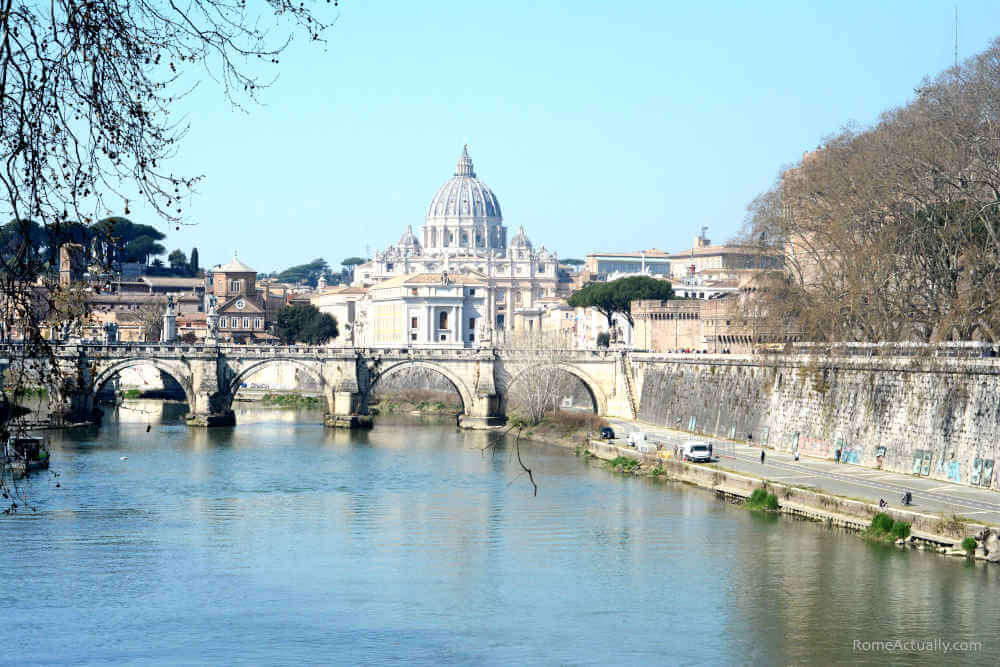 Ponte Sant’Angelo bridge might not be the most ancient in Rome (Pons Fabricius holds this record) but bears such a stormy, fascinating history that it certainly is one of the most interesting and beautiful bridges in Rome.

Ponte Sant’Angelo is a cobbled bridge that opens a scenic way from the city center to the Hadrian Mausoleum, today called Castel Sant’Angelo, one of the most historically important buildings of Rome.

Even though not the oldest Roman bridge still standing, the Castel Sant’Angelo bridge is indeed very ancient. It was erected by the emperor Hadrian in the 2nd second century, in 136 CE, with the purpose to give monumental access to his funerary mausoleum (Castel Sant’Angelo) built beyond the Tiber from Rome’s pulsing heart and historic center.

Originally, the bridge was really used mainly as a passageway to visit and pay respect to the tomb of the emperor. Only gradually, with time and with the Hadrian Mausoleum also playing different roles including stronghold, residence, and prison, also the bridge became the theater of several historical events.

In 472 the Germanic troops of Ricimer used this bridge to invade the eastern side of Rome at the time under the protection of emperor Anthemius, killed by the same Germanic general during the siege.

During the Middle Ages, Castel Sant’Angelo was used as a stronghold so the bridge was equipped with a fortified tower.

The Jubilee of the year 1450 was marked by a tragedy: when the bridge was being crossed by a myriad of pilgrims coming and going to the Vatican, a shying horse or mule caused widespread panic, and the crowd amassed against the railings, making them collapse. Many people fell on the river and the incident caused almost 200 dead.

On this occasion, Pope Nicolò V ordered to place two chapels at the entrance of the bridge, one devoted to Saint Mary Magdalene and one to the Holy Innocents. The chapels remained there for less than a century because in 1533 Pope Clemens VII made them replace with two marble statues of Saints Paul and Peter that we can still see today.

Three years later, the city needed some sprucing up here and there for the arrival of the emperor Charles V and one of the places to be revamped was once again the Sant’Angelo bridge. Pope Paul III ordered that the bridge would be adorned with eight statues, four representing the Evangelists and the other four the Patriarchs Adam, Abraham, Noah, and Moses. The statues were in stuccowork, though, so they wore out pretty quickly. In 1668, Pope Clemens IX put the leading artist Gian Lorenzo Bernini in charge of a full renovation of this bridge.

In its long history, the Ponte Sant’Angelo bridge was crossed by countless pilgrims who wanted to pay their respect to Saint Peter’s tomb but also by many popes, kings, queens, world leaders, by some of the biggest Italian and world artists such as Dante Alighieri, Michelangelo, Bramante, Botticelli, Copernico, Torquato Tasso, and several saints including San Filippo Neri and Santa Rita da Cascia.

Originally, the bridge was called Pons Aelium after the emperor himself (Publio Elio Adriano), while in the Middle Ages its name was changed to Ponte San Pietro (Saint Peter’s bridge) because it was the direct connection between the Vatican to the city and the shortest way to reach the tomb of Saint Peter.

Its current name, however, is more ancient and dates back to 590 CE. This is when, according to tradition, Pope Gregory I saw the archangel Michael on top of the Hadrian Mausoleum sheathing his sword. This was taken as the definitive sign to announce the end of the deadly plague that had been raging in Rome for two years. This is when both the castle and the bridge were dubbed Sant’Angelo.

The current look of the Ponte Sant’Angelo bridge was reached in the late 19th century. Before that, the bridge was made of three large central arches flanked by two smaller ones on the edges.

The original bridge was made in peperino coated with travertine and consisted of three arcades accessible through ramps from the river shores. The ramps were supported by smaller arches on both shores but were destroyed during the complete renovation launched around 1892-93 when they built the river banks.

After demolishing the small arches, they built other two large arcades on both sides identical to the three central vaults. Now Ponte Sant’Angelo bridge consists of five large brickwork arcades, it is 130 meters long (426 feet) and 9 meters wide (30 feet).

The Angels of Castel Sant’Angelo

Along with architectural changes, Bernini added ten marble statues to the two of Saints Peter and Paul already standing at the entrance, ten angels representing the symbols of the Passion of Christ.

The ten angels of the Ponte Sant’Angelo bridge were carved by Bernini and his pupils, they are arranged in couples and bear inscriptions from the Old Testament on their base.

The first couple symbolizes the flogging suffered by Jesus with one angel holding the scourge the Christ was flogged with and one the pillar where he was tied.

A second couple of angels have the crown of thorns and the veil where Jesus left his blood.

In the third couple of angels, we see Jesus’ tunic and the nails used to crucify him.

The fourth couple of angels hold the mocking INRI title and Jesus’ cross.

The fifth and last couple of angels hold the sponge soaked with vinegar that a soldier gave him instead of water and the lance that pierced Jesus’ side.

Check out our article on the best places to see Bernini in Rome.

With such a long history, so many events that happened here, and the fact that it’s in a city so full of tales and mysteries like Rome, it’s no wonder that there are so many legends around Ponte Sant’Angelo bridge.

Make sure you read our article on the most romantic things to do in Rome.

Where it is and how to reach Ponte Sant’Angelo Bridge

What to See near Ponte Sant’Angelo Bridge

Where to eat near Ponte Sant’Angelo

When it’s time to eat, I suggest you stray away from the strictly touristy areas and head to Prati instead where you can find several nice restaurants or further in the city center.

Make sure you read our article on the best street food places in Rome.

Where to stay near Ponte Sant’Angelo

Check out our guide to the best accommodation near the Vatican.