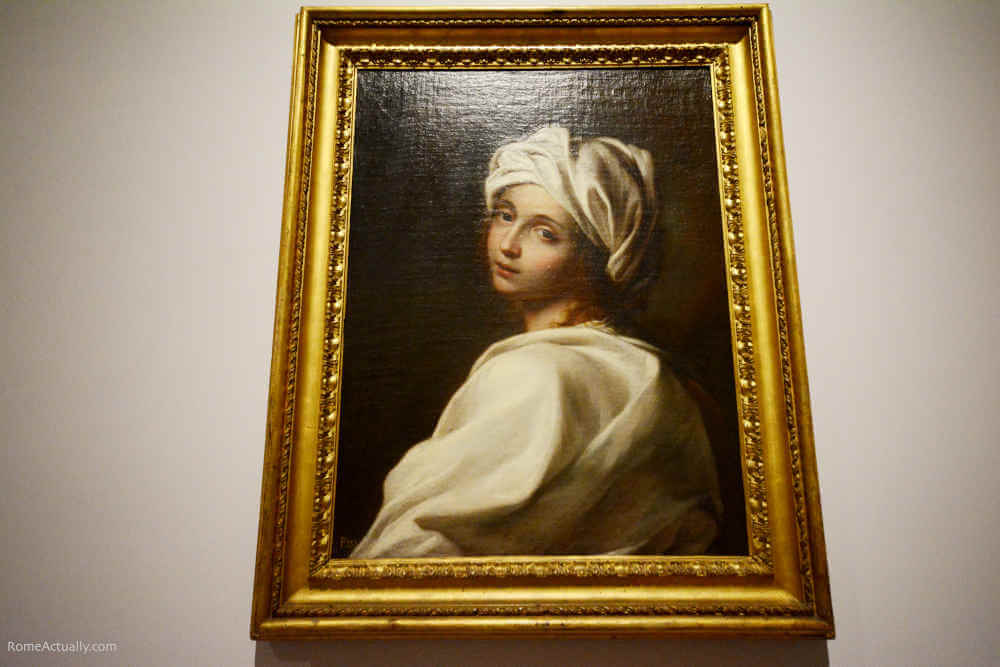 Tucked away in a wing of the Roman Baroque masterpiece Palazzo Barberini, almost hidden from the main museum route, is a tiny painting, the portrait of a young girl. Debates have been raging on its authorship, but now art historians seem to agree that it’s not the portrait of the unlucky Roman patrician Beatrice Cenci by Guido Reni as we thought, but probably of a Sibyl, the figure of a female oracle in Ancient Greece, made by the little-known painter from Bologna Ginevra Cantofoli.

Who was Beatrice Cenci?

Previously attributed to Guido Reni as the portrait of Beatrice Cenci, this small painting has been the object of philosophical movements and a pilgrimage destination since the 18th century. But who was Beatrice Cenci? What did she do to arouse such strong sentiments?

It was the year 1599 and 22-year-old Beatrice Cenci was executed by beheading in front of Castel Sant’Angelo (the Hadrian Mausoleum). To be honest, her story wasn’t so much of an unusual event in Renaissance Rome ruled by the Pope. Back then, death penalties and abusive fathers were quite common. Because, yes, it’s very likely that Beatrice was actually guilty of killing her abusive father, Count Francesco Cenci, with the help of the whole family, not last, her stepmother, her father’s second wife, having Beatrice’s mother died when she was only 7 years old.

After years of tyranny and mistreatment, Beatrice decided to bring her father to justice. However, even though everybody in Rome knew what kind of person he was and despite the fact he had already got in trouble with the police, her cry for help was vain. Out of desperation, Beatrice and her family reckoned that his murder was the only solution to their problems.

Together with her stepmother, two brothers and two of their servants, they poisoned him, broke his legs and killed him by hitting him on the head and throat. To fake an accident, they ditched him in a dip but after a quick investigation, nobody believed that was the case. With more thorough inquiries that included torturing, investigators obtained the suspects’ confessions.

Belonging to a well-heeled family, Beatrice Cenci was certainly the victim of a time when in Rome daughters didn’t have much say in their life and future. It’s certain that her father was a cruel patriarch since the whole family took part in his departure, and probably he was also guilty of sexual abuse, even though the Cencis’ lawyer Farinacci didn’t manage to save their life in what has been defined as an unfair trial.

When the moment of her execution arrived, the local citizens started a spontaneous protest asking Pope Clement VIII to change the sentence and avoid her death. This dramatic event shook the whole city, but the Pope, fearing an increase in violent crimes in Rome and probably because he hated the Cenci family and couldn’t wait to confiscate all their earthly possessions, refused to show any mercy. Only her youngest brother, Bernardo, was spared and his sentence changed to long-term prison. In fact, he was locked in the Mamertino Prison and left there for life, forgotten. This, after being forced to watch the execution of all his family.

The legacy of Beatrice Cenci

According to some legends, the great Baroque painter Caravaggio was present during Beatrice’s execution and this inspired his famous painting Judith Beheading Holofernes displayed at Palazzo Barberini in Rome. Not all historians agree on this because of a number of reasons. First of all, there is no absolute certainty about the date of the painting, it could be made a year before the actual execution. Last but not least, Cenci was beheaded with a rudimentary guillotine-style instrument, while Caravaggio’s painting shows decapitation by scimitar.

The same Palazzo Barberini, the former residence of the noble Barberini clan, preserves also the small painting previously mistakenly attributed to Guido Reni he supposedly made moments before she was led to the executioner’s block. This is the first hint that made historians start to doubt his paternity. It was very unlikely that a painter was let inside the prison right before she was going to be executed.

When Goethe revealed to his friend and philosopher Johann Georg Zimmermann how much humanity he had perceived from “Cenci’s face” was 1777. In 1778, Lavater devoted emotional pages to Beatrice Cenci in his “Physiognomische Fragmente” remembering her sad destiny as described by Lodovico Antonio Muratori in his 1749 “Annali d’Italia”, where he wrote about the “unruly desires” of her father and the Pope’s intransigence.

This narrative inspired more romantic literature and writers and poets of the likes of Shelley, Dickens and Stendhal among the many who honored the memory of the unlucky Roman girl contributed to creating the myth around this small painting, making it a real cult. The portrait of this young woman, with her red eyes, as if she was crying, an image of innocence and kindness, was the heart of a romantic myth that made Beatrice Cenci the perfect heroine around growing hostility towards the Catholic Church.

Make sure you read our article on the best places to see Caravaggio in Rome.

Where to find Beatrice Cenci in Rome today

The execution was scheduled for September 11th, 1599 at dawn and Beatrice was buried in San Pietro in Montorio cemetery under a nameless tomb as it was used for the death sentences. Two centuries later, during the French occupation of Rome, the foreign troops desecrated several tombs of this cemetery including the one of Beatrice Cenci and her remains were lost and never found. From then on, every year on the night between the 10th and 11th of September her ghost wanders around Castel Sant’Angelo (the Hadrian Mausoleum), the place of her death, carrying her severed head in her hands.

However, if you don’t happen in Rome this exact night, after seeing what for years was believed to be her portrait, you can see the palace where she used to live, Palazzo Cenci in Via Monte de’ Cenci. Beatrice and her stepmother were locked in the Corte Savella prison until their death and while today the jail doesn’t exist anymore, in its ancient site of Via di Monserrato, in 1999, the 500th anniversary of her death, the Rome Council placed a plaque in memory of the 22-year-old, “victim of an unjust justice”.