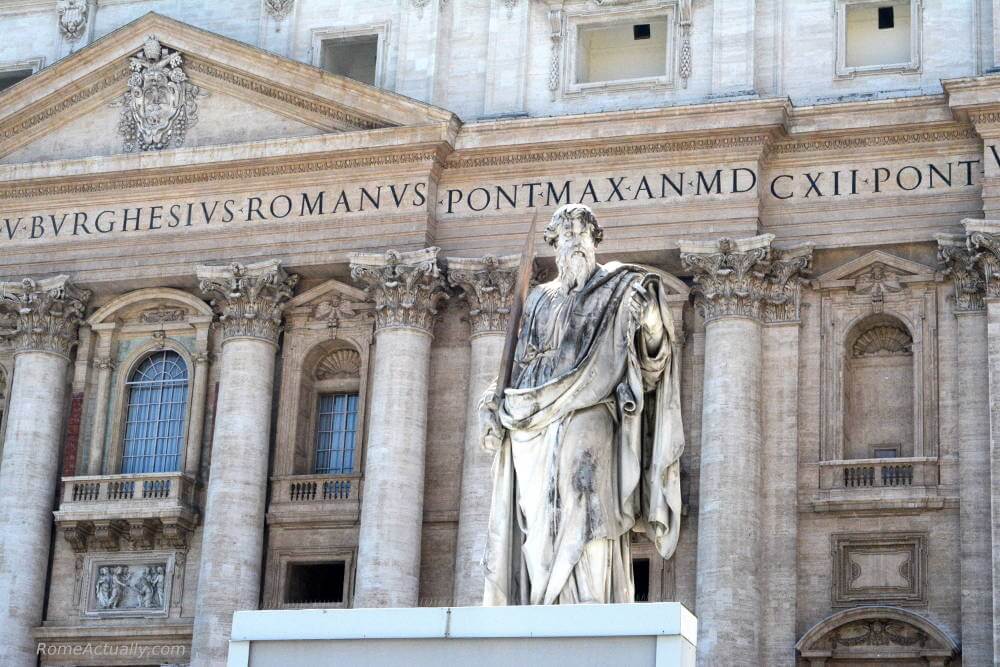 One of the most famous churches in Rome, with its 190 meters of length, Saint Peter’s Basilica can accommodate approximately 20,000 people. The final consecration of the renovation works took place in 1626 with the blessing of Pope Urban VIII.

This article is entirely devoted to providing you with all you need to know about enjoying your visit, practical tips to know before you go as well as fascinating bits of St. Peter’s Basilica history.

READ MORE: Check out our guide to visiting all the landmarks in Vatican City.

1. In origins, it was a Circus

The soil where now stands Saint Peter’s Basilica was originally used as the place for the Circus wanted by Caligula, Roman emperor from 37 to 41 AD, close to which they then built a huge cemetery that you can visit still now. More to this great ancient Roman site later in the post.

Caligula’s Circus was expanded by Nero, and this is where Saint Peter Apostle was martyred by being crucified upside down.

2. This is not the original St. Peter’s Basilica

The basilica as we see it today lies on top of the former basilica devoted to Saint Peter Apostle commissioned by Emperor Constantine. The original basilica was smaller than the modern one but had the same orientation.

The switch from the Constantinian building to today’s Basilica was gradual and went through different renovation works. Started by Pope Niccolò V, they lasted for about 150 years and saw a glorious sequence of some of the most famous artists of the time, from Raphael to Michelangelo. The latter, among the other things, designed the dome and personally followed the construction until he died in 1564.

The interior of the majestic basilica enshrines a fascinating sequence of historical and artistic layers. Some of its historical landmarks are Saint Peter’s Baldachin, a large bronze canopy Baroque-style built in the 17th century by Bernini, and the porphyry ring placed at the entrance Charlemagne kneeled on at his coronation on December 25th 800.

4. The interior is a never-ending sequence of artwork

Saint Peter’s Square and facade are stunning and bear plenty of art and symbols. But wait to go inside to really be amazed by the amount of artwork you will be staring at. Countless statues, fine carvings, and wonderful mosaics make St. Peter’s Basilica one of the world’s most beautiful churches.

By all means, do not miss the beautiful sculpture La Pietà by Michelangelo, the artist’s first masterpiece, and the only one he signed. With an accurate glance, you will notice that Mary looks younger than her dead son. The official explanation is that Michelangelo was inspired by the verses of Italian poet Dante Alighieri’s commanding Divine Comedy (“O virgin mother; daughter of thy Son“), where Mary is the symbol of purity.

There is another theory, however, that places the sculpture closer to the personal life of the artist. Michelangelo lost his mother when he was only five, and sculpted La Pietà at 24 years of age. In his mind, his mother was a young woman, so it’s not unlikely that he portrayed his mother’s face as he remembered her.

6. Only 3 women are buried inside St. Peter’s Basilica

Popes’ tombs can be found inside the basilica and beneath it, in the crypt (free admission), next to what remains of the walls of the original Constantinian basilica. There are also three women whose resting place is inside Saint Peter’s Basilica, Christina Queen of Sweden patron of arts and music, Matilda of Canossa (or of Tuscany), member of the powerful Italian clan of House of Canossa, and the pious Polish princess Maria Clementina Sobieska.

READ MORE: Planning to stay in the area? Check out the best hotels near the Vatican.

7. Below the Basilica is an ancient Roman cemetery

Located underneath the main basilica, some 11 meters beneath today’s street level, is an ancient Roman cemetery. It lies right next to the circus Caligula built on the Villa Agrippina that he inherited from his mother and that was later expanded by Nero.

Once open-air, this Roman necropolis under St. Peter’s Basilica hosts the tomb of Peter, found when Pope Pius XI ordered to start digging. In this huge underground cemetery, the graves are mixed, Pagans and Christians, Roman families with their Christian servants buried in the same mausoleum. When the funerary mausoleum are the ones belonging to wealthy families, they even had their own terrace because it was believed that the dead, both owners and servants, would feast together.

You can book a tour to St. Peter’s tomb with a professional guide for deeper knowledge about this fascinating place.

Designed by Michelangelo, after his death in 1564, his pupil Giacomo della Porta took over the project of St. Peter’s dome. It was completed 24 years after Michelangelo’s death.

The dome has an inner diameter of more than 42 meters and is 136.57 meters tall, making it one of the world’s tallest domes.

If you are wondering how much are St. Peter’s Basilica tickets, I have good news for you. It’s free to enter and enjoy all the art masterpieces inside. Not only that but also the popes’ crypt is free and you can access it from inside the church.

At the entrance, you can rent audio guides.

2. There is a dress code

Saint Peter’s Basilica dress code requires modest clothing for both men and women. Shoulders should be covered, no mini-skirts, no shorts, no sleeveless t-shirts. Shorts and skirts should be at least knee-length.

The Basilica is open every day from 7 am to 7 pm from April to September. From October to March, it opens from 7 am to 6 pm.

Michelangelo dome is open every day from 8 am to 6 pm April to September. From October to March opens from 8 am to 5 pm.

4. Be ready to queue

Could one of Rome’s most popular landmarks be without queue? Unlikely. When visiting Saint Peter’s Basilica, be ready to stay in the line. This is always the case, but especially so in the high season, which is mainly in summer, from June through August. Also around Christmas and Easter time, you might find some lines.

The queue happens because to enter the Basilica you need to go through a police check and a metal detector, a little like at the airport. But don’t worry, they do run it pretty quickly.

To skip the queue, you can book a complete private Vatican tour that includes fast-track entrances to the Vatican landmarks, including St. Peter’s Basilica.

READ MORE: Check out our full guide to see more of the best tours to the Vatican.

Apart from booking a private tour, there is very little you can do. The line can be very long in high season, but even then, something useful is to go very early in the morning. If you manage to be there even a little before opening time, it can save you a couple of hours on the rest of the day.

Sometimes, also in the afternoon close to closing time can be a good moment to find a small queue as most tourists prefer the morning. Just keep in mind that there is a lot to see inside the Basilica, so this depends on how much time you want to devote to the artwork.

6. The Basilica is easy to reach

There are many ways to get to St. Peter’s Basilica. Depending on where you are in Rome, you can get to Saint Peter’s Square by metro, bus, or train.

The nearest metro station to St. Peter’s Basilica is Ottaviano, while to reach the Vatican Museums you should get off at Cipro. Both stops are on line A (red).

Buses that get close to St. Peter’s Square are 64 and 40 from Termini Station. The 64 stops in Via Cavalleggeri, while the 40 in Via della Traspontina off Via della Conciliazione.

The nearest train station is Stazione Roma San Pietro in Piazza della Stazione di San Pietro. From here, you can either walk for some 15 minutes or take the 64 bus for two stops.

READ MORE: Want to know more about the Holy See? Check out our article on the fascinating facts about the Vatican and its history.