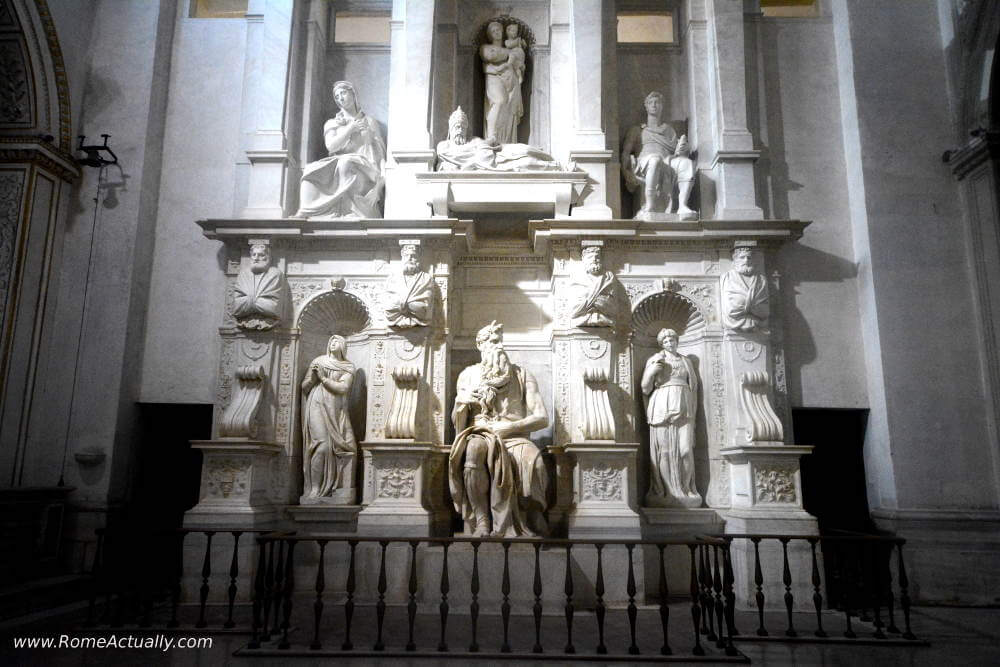 There is a church that, even though near the historic center, is far from the immediate tourist eye, hence often neglected and without the stream of daily visitors that the most famous churches in Rome see every day at their doorstep. San Pietro in Vincoli Basilica is certainly mentioned in the guidebooks, but probably for its position tucked away on top of a steep staircase or for not being included in many of the city tours, it’s never crowded.

While the entrance might not offer a loud appearance, there are quite a few reasons to visit this church: a fascinating history, the famous sculpture of Michelangelo’s Moses, and the chains that held Saint Peter captive.

Why visit San Pietro in Vincoli Basilica and what to see

How San Pietro in Vincoli Basilica was founded

As I mentioned earlier, one of the reasons to visit this semi-hidden basilica is its history. The basilica, one of the least-visited churches in Rome, was named after the chain that held Saint Peter captive in Jerusalem as well as in the Roman Carcere Mamertino prison (vincula in Latin means chains).

The Catholic Church was already in possession of the chains used for Saint Peter in the Roman Mamertino prison so, according to the legend, when the Pope pulled together the two groups of chains, these merged into one as a result of a miracle. San Pietro in Vincoli Basilica was built in 442 AD to commemorate and celebrate the miracle, with the support of the same empress, and here the chains are still preserved.

In the 1950s-’60s, archaeological diggings revealed the existence of an early-Christian church below the new basilica built in the 5th century as well as other ancient buildings such as aristocratic houses (domus) belonging to different centuries, including one from Nero’s era, and their decorations like mosaics, a courtyard with a pool, and gardens.

What to see in San Pietro in Vincoli Basilica

Alongside the sacred relic important for the followers of the Catholic faith as well as religion’s scholars, this church is worth including in your Rome to-do list also for another reason: it houses the gorgeous Moses by Michelangelo, one of his most important sculptures and what makes this church famous.

The statue was originally commissioned for the funerary monument of Pope Julius II to be placed inside Saint Peter’s Basilica in the Vatican. When Michelangelo came back from Ferrara, where he had spent the previous eight months looking for the perfect marble for the statue, the project had been abandoned and only after the death of Julius II the project was resumed and transferred to San Pietro in Vincoli. Michelangelo managed to complete Moses before Pope Paul III talked him into working on The Last Judgement for the Sistine Chapel.

The funerary mausoleum of Julius II was completed by Michelangelo’s pupils and has now six corners for the statues, a much modest achievement compared to the original project that had some 40 statues. Of these six statues made for this mausoleum, two are kept in Paris’ Louvre and four are in Florence’s Accademia near the David. Thankfully, the main statue of Moses is kept in its original setting here in the basilica.

Take a moment to observe and enjoy the details of this masterpiece. You won’t fail to notice the small crack on a knee, and according to the legend, it was done by Michelangelo itself who hit it shouting “Why are you not speaking?”

On the right nave, you can see the Saint Augustine painting by Guercino while on the second altar there are two portraits attributed to the painter Domenichino.

The church itself is a precious work of art and missing it would be a pity.