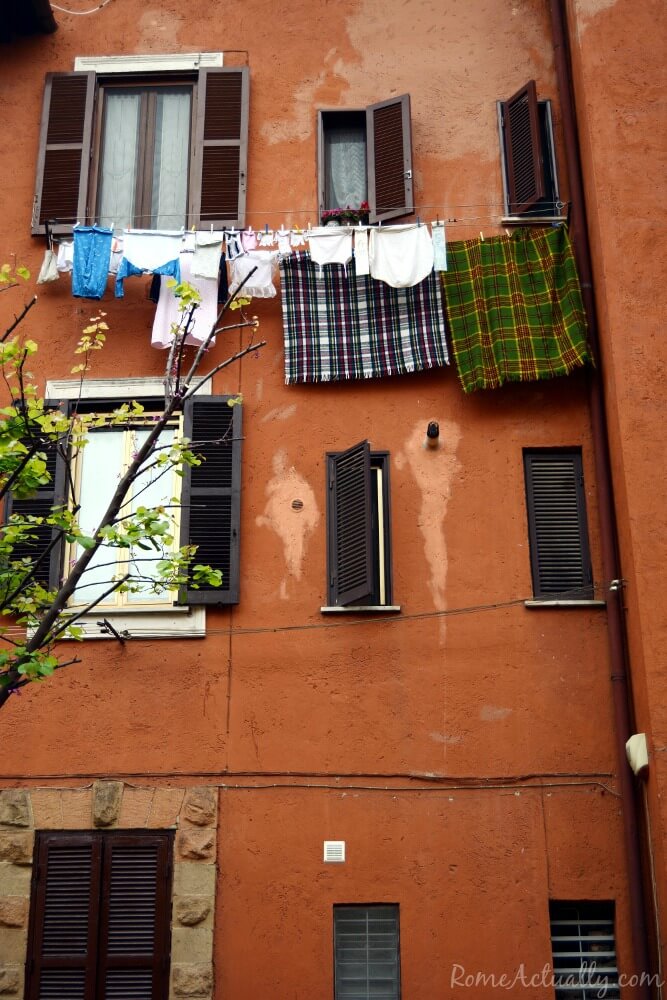 Colosseum, ancient ruins, immortal masterpieces, Caravaggios, and basilicas. While Rome is all that, there are many other fascinating areas of the city overshadowed by such timeless jewels, and one of them is the Garbatella Lots. Even I discovered the Garbatella neighborhood quite haphazardly during a photography course. I knew about it but I had never really had the chance to go. While this might not be one of those highlights you will visit if you want to see Rome in three days, if you have seen Rome’s main landmarks and would like to go off the beaten path, this is definitely a fascinating neighborhood to explore and a cheaper one to book your hotel.

A very traditional neighborhood, Garbatella was created in the 20th century as a working-class area strictly connected to the bordering Ostiense district where much of Rome’s factories, warehouses, and power plants were. These are now all the relics of Rome’s bygone industrial past we can visit and that make this area so fascinating.

The Birth of the Garbatella Neighborhood

While ancient ruins and art masterpieces are undeniably priceless treasures, I think it’s walking these narrow streets and entering these private gardens that you can actually feel the vibe of a village-like atmosphere you never thought a big city like Rome could have. Created in the 1920s under the Fascist rule following a project by Paolo Orlando, Garbatella was inspired by the English urban planning idea of “garden cities” envisioned by town planner Ebenezer Howard as a response to the need for sprawling cities for a better and healthier quality of life. The district was divided in 62 lots inclusive of cottages and 3-story blocks of flats equipped with green areas and arable yards and squares as a hangout for the residents.

The purpose of this neighbourhood has always been functional to the nearby districts of Testaccio and Ostiense. It was created as a residential area for the workers of the fluvial port roughly located where now is Via del Porto Fluviale street, a navigable canal for shipping and trading logistics from Ostia to this part of the city. Finally, the canal was never built, but the neighborhood kept its purpose to became a residential area.

It housed not only the workers of the different factories in Testaccio and Ostiense, including the general warehouses, the city’s main power plant Centrale Montemartini, today turned into a fascinating museum, gasometer and fish market, but also the families displaced from the old Spina del Borgo quarter demolished in the 1930s to build today’s Via della Conciliazione, the obelisk-lined boulevard connecting St. Peter’s Square to Castel Sant’Angelo, and the families misplaced for the building of Via dei Fori Imperiali.

The Culture and Traditions of the Garbatella Neighborhood

Apart from the historical facts that brought the quarter into existence, however, it’s not quite clear how the name “Garbatella” (kind lady) came about and especially where her features, as engraved on the wall of a building in Piazza Geremia Bonomelli, came from. Tradition wants her to be the beautiful and kind hostess of a local tavern, while some try to identify her with a noblewoman or a woman from the lower class. Whatever explanation has been given so far, none seems to bear historical evidence, but no one can deny that this neighborhood embodies the most traditional, working-class soul of the city, where you will see all things Italian, from superstition to faith to laundry hanging everywhere.

Romans are very proud of their popular Garbatella neighborhood and aware that it’s actually a beautiful working-class quarter. What’s great about this quarter is that even though it’s very recent, it retains much of its traditional charm. And while it clings on tradition, you will find plenty of cutting-edge eateries and architecture.

What to see and do in Garbatella neighborhood

If you have booked your hotel in the area and don’t want to travel too far for a nice meal, an after-dinner drink, or a bit of cool sightseeing, there are plenty of things to see and do in Garbatella that you won’t even feel the need to use public transport.

Enjoy an international meal at Altrove’s

If you feel like indulging in foreign recipes and fusion flavors, Altrove restaurant is your best choice in the Garbatella quarter. Vicariously eat your way through Asia and Africa and back to Rome with the dishes of chef Barbara Agosti in the kitchen, Ornella De Felice for the baked goods, and the international touch of foreign chefs from Afghanistan, Bangladesh, and Mali.

One of Rome’s four papal basilicas, Saint Paul Outside the Walls, much less visited than its centrally-located sister churches but equally impressive, is definitely one of the first places to visit in the Garbatella neighborhood. Admire the artwork of the church and don’t forget to visit its undergrounds for an interesting archaeological site that shows the excavation of an ancient part of Rome.

Try your Luck at Fontana Carlotta

Being Rome the city of beautiful piazzas and fountains, it wouldn’t be believable if there was no notable fountain in Garbatella. This head-shaped fountain is named Fontana Carlotta and is surrounded taken quite seriously. Apparently, if you drink its water with your right hand on the head of the sculpture, it brings you good luck and makes your dreams come true. Since public water in Rome is drinkable, there is no harm in trying.

Right next to Fontana Carlotta, you can climb the large staircase known as the Lovers’ Staircase in Garbatella. It was given this name because this is where couples and lovers used to meet after WWII for a moment of intimacy.

Apart from the ancient factories and gas and power plants, there is plenty of colorful and socially-aware street art to be admired around Ostiense. Walk in Via del Porto Fluviale, Via dei Magazzini Generali and the same Via Ostiense for fantastic mural paintings representing a variety of subjects and topics and giving a cool revamp to some otherwise grey and abandoned buildings.

One of my favorite vegan restaurants in Rome, Romeow combines gourmet plant-based dining with the company of six lovely cats. Open through the day as a bistrot and cafe and serving also lunch and dinner, here you will find a frequently changing menu featuring the vegan version of many international dishes, delicious cakes, and tasty and nutritious smoothies.

Walk across the Settimia Spizzichino Bridge

Featuring a simil cobra shape, Settimia Spizzichino bridge between Garbatella and Ostiense is a design of engineer Francesco del Tosto and was named after the only woman who survived the raid of Rome’s Jewish Quarter and survivor of the Holocaust. Of Spanish inspiration, it’s 240-mt long and runs over the metro line B and the Rome-Ostia Lido railway. It’s lovely to visit at night to see it lit up with evening lights.

2 thoughts on “Discover the Traditional and Cutting-Edge Garbatella Neighborhood”