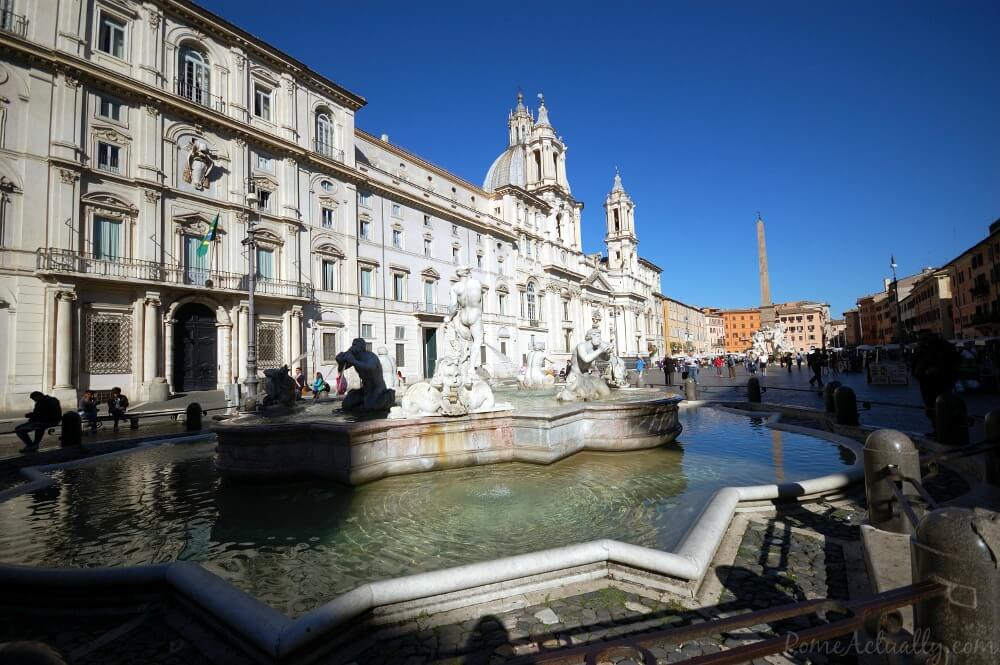 That’s right, in Rome, wherever you start digging you are bound to find a new wonder, just because the ones under the sky are not enough. A great place to start exploring underground Rome is its Domitian Stadium, a great archaeological site beneath Piazza Navona of utmost importance as a vestige from imperial times. Being so central and literally on the site of one of the most visited landmarks, you can easily include it in your bucket list whether you are staying three days in Rome or even if you want to see Rome in one day only.

If you’ve been to the Eternal City, no doubt you’ve already seen Piazza Navona, and maybe even had an expensive coffee enjoying the view of Bernini’s Four Rivers’ Fountain or had your portrait done by one of the many street artists. Likewise, if you are still planning a trip to Rome, this gorgeous square will certainly be on your sightseeing list.

However, what you have probably missed is what lies beneath one of Rome’s most beautiful piazzas, beneath the stunning Bernini’s fountain, beneath the street artists and painters, the Renaissance palaces and Borromini’s Sant’Agnese in Agone Basilica, and also beneath the expensive coffee shops.

What is Domitian Stadium

The very shape of Piazza Navona never quite concealed its previous raison d’être, and thinking that, after all, we are in Rome, we shouldn’t be surprised to actually be able to go down some steps and find the ruins of a huge race track, the 1st-century Stadium of Domitian.

Located some 4.50 mt beneath street level, Domitian Stadium is the first and only example of brickwork stadium in Rome, and the archaeological site is what’s left of it. This and the stadium of Antonino Pio found in Pozzuoli are the only ones of this kind found outside of Greece. The Stadium of Domitian had the shape of a circus and featured two straight and two curved short sides and was embellished with arcades, pillars, sculptures, and fine carvings. Its size was 275 by 106 meters.

Built by emperor Domitian around 86 BCE and aimed at Greek-style athletics contests and performances, the racetrack, right underneath the piazza, measured 240 meters by 65, and its grandstands had a capacity of 30,000 spectators. While today it may sound huge, if we think that the Colosseum could seat between 80,000 and 100,000 people, we understand that Domitian knew full well his townspeople, and this is why he decided that the stadium located in the Campo Marzio area and devoted to much less bloody games than the ones taking place at the Colosseum was better off smaller and cozier than its more popular counterpart.

Domitian’s attemp to elevate his fellow citizens into more sophisticated leisure activities, organizing also mind games during the breaks was well-meant but proved rather unsuccessful: when gladiators combats were on schedule, no Plato-inspired sports event was hardly going to arouse any interest among the gore-loving Roman population.

The vestiges we can see in the archaeological site in the undergrounds of Piazza Navona have been retrieved in several stints from 1868 and in different parts of the square including in many basements of Piazza Navona, several under the beautiful church of St. Agnese in Agone, others underneath the buildings of the École Française de Rome, that you can see if you join the Exclusive Route.

Book a guided tour to Domitian Stadium or buy the entrance ticket with audioguide.

What to see in Domitian Stadium

The first segment open to the public lies in Via di Tor Sanguigna, on the northern side of Piazza Navona, and what we can visit is a small part mainly of the grandstands and the entrance, with the chance to see statues, decorations, stone stairs, bleachers and the original floor. When I visited Domitian Stadium, they had just finished the digging and opened it to the public, so the area we could actually visit was very limited.

Now, however, there is a much larger archaeological site open to visitors for a truly outstanding experience. This, if you think that the huge travertine and brickwork stadium dating back some 2000 years ago was the first of its kind and is still there despite the debris and later building spree.

The walls and structure of the archaeological area of the Domitian Stadium are so well preserved that it makes it an extraordinary relic from the imperial ages. Among the remains you can see during your tour are a Pentelic marble torso copy of the 4th century BC Apollo Lykeios by Praxiteles.

The ticket includes the audioguide and the experience is enhanced by multimedia installations, photos and videos about the history of the Stadium, of Piazza Navona, of other monuments of Ancient Rome and of sport in imperial age.

I admit I’ve been growing pretty fixated with what lies underground Rome, and I feel this is only the beginning of what can be discovered. Luckily for you, whatever I find will be duly reported here, to make it easier to explore yourself lesser-known sites of one of the world’s most popular holiday destinations.