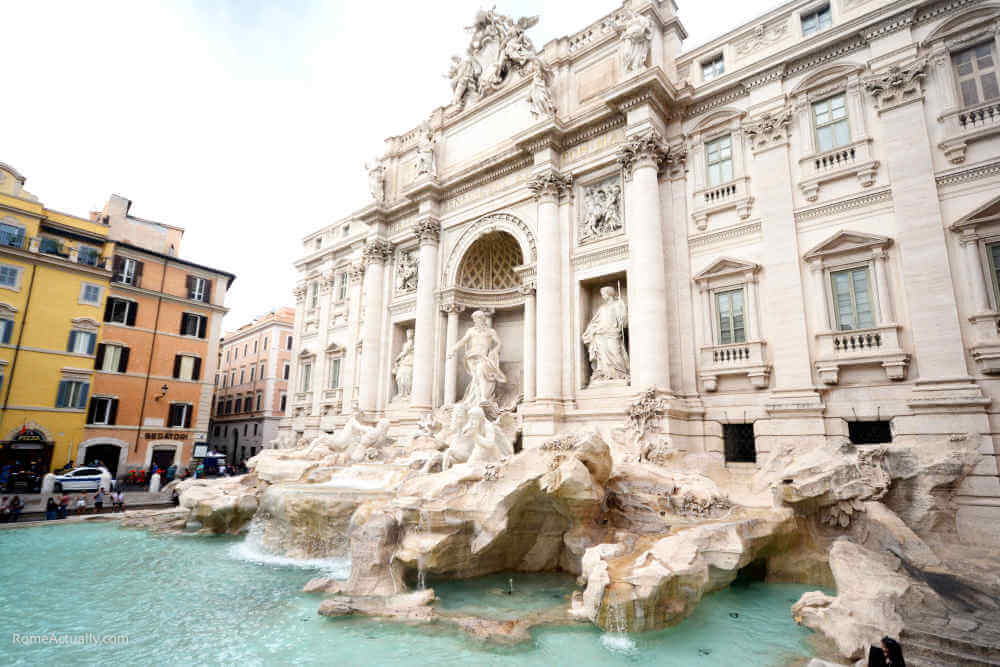 Arguably Rome’s most beautiful fountain, the origins of Fontana di Trevi are to be traced all the way back to the 1st century BC when the Roman politician, statesman and architect Marcus Vipsanius Agrippa diverted the Aqua Virgo aqueduct into Rome to feed his private thermal baths. In our article, we go through some fun and interesting facts about the Trevi Fountain you will want to know before visiting.

The history of the last reservoir of the famous Aqua Virgo pipeline is long and intricate, and the late-Baroque masterpiece we see today is its most recent development. Hardly a landmark to be missed, especially if it’s your first trip and even if you are staying only one day in Rome, the Trevi Fountain is a mesmerizing feat of engineering, sculpture and art almost always included in the private guided tours of the city.

History and Art of the Trevi Fountain

Even though everybody knows the Trevi Fountain as one of the highest examples of the Italian Baroque, the origins of this major Rome landmark are to be traced far back. As a matter of fact, the masterpiece by Nicola Salvi we see today is in fact the last show of the Aqua Virgo aqueduct.

Arguably Rome’s most beautiful fountain, the origins of Fontana di Trevi are to be traced all the way back to the 1st century BC when the Roman politician, statesman and architect Marcus Vipsanius Agrippa diverted the Aqua Virgo aqueduct into Rome to feed his private thermal baths.

In what is now Piazza di Trevi, Agrippa simply put three tubs to collect the water gushing out of the pipeline, making it a minor fountain. Somewhere around the 8th century, the aqueduct was interrupted and this became its last spout in the city.

Throughout the centuries, the fountain was slightly modified. In the 15th century, instead of three, they installed one large tub and a local family was employed to take care of the fountain, manage the citizens who would go to take water, and protect it from those who would fill entire tanks to then sell it.

Often, throughout the centuries, popes and noble families offered to restore fountains around the city as a way to elevate their name by carving their name and coat of arms on the sculpture. Several were the popes who ordered maintenance and renovation of what became the Trevi Fountain, from Niccolò V to Pius IV to the powerful Urban VIII from the Barberini family who decided to commission Gian Lorenzo Bernini nonetheless to replace this unpretentious tub with a majestic fountain.

The famous architect submitted several projects, all extremely costly. Urban VIII, however, didn’t want to give up on his favorite artist and made the unpopular move to increase the tax on wine. As if this wasn’t enough, he also gave written permission to Bernini to dismantle the tomb of Cecilia Metella in the ancient Appian Way so that its beautiful marble could be used to complete the fountain in Trevi.

This, however, made Romans even less happy than the tax surge and the protest was so large that Bernini had to stop dismantling the monument. Both Urban VIII and Bernini died before Fontana di Trevi was completed, and the artist only managed to expand the square by demolishing a few local houses and setting the orientation of the new fountain, which was kept in the subsequent, final project, a century later.

It was in the 18th century that Pope Clement XII chose the project submitted by Nicola Salvi, clearly inspired by Bernini’s style. The final work started in 1735 and continued through the pontificate of the other two popes. Salvi died before his time before the work ended and the fountain, completed by Giuseppe Pannini, was inaugurated in May 1762.

Fontana di Trevi is a huge marble complex made of several sculptures. The most important and famous statue of the Trevi Fountain is Oceanus as a tribute to the god of the sea, a masterpiece by sculptor Pietro Bracci. Oceanus stands on top of a shell-shaped carriage pulled by two sea horses that are led by two tritons.

On the sides of the central, larger niche are two smaller nooks each holding a statue, Abundance on the left, Salubrity on the right. Both statues stand on bas-relief supports, one representing Agrippa approving the building of the Aqua Virgo aqueduct and the other the Roman virgin directing thirsty soldiers towards the springs of the water from where the aqueduct starts. This Roman myth is also the reason for the aqueduct’s name.

The bottom of the whole fountain is a giant rock dipping into a large basin that represents the sea.

You can visit the Aqua Virgo Aqueduct

That’s right, all around Fontana di Trevi there are several sites where you can see the ruins of the ancient Aqua Virgo aqueduct. For history and archaeology lovers, this is incredibly fascinating. I, myself, couldn’t have enough of those sights. Some still have water, some barely humid, like the ruins in the undergrounds of La Rinascente shopping mall in Via del Tritone, some covered in water like the cistern in Vicus Caprarius near the Trevi Fountain, one of the coolest archaeological sites in Rome, some quite dry, like the area in Via del Nazareno, also in Trevi.

When you visit Fontana di Trevi, your sight is obviously captured by the giant Baroque fountain, its beautiful statues, and the water merrily gushing out. But how many travelers pay attention to the little fountain on the right of the main one? This is not a very fancy sculpture, but it carries a long Roman tradition. Among the fan facts about the Trevi Fountain you should know is that here is where local couples have been sealing their love.

Before the future husband went to war, they would meet here, they would drink this water from a glass never used before, and they would smash it right there to secure their love forever. Go here and you will probably find tourists freshening up during the hot summer days or filling their bottles, but do snap your picture in what is a lesser-known corner of Roman tradition.

On the right side of the main sculpture, right before the lovers’ fountain is a large vase known as the ace of cups for its shape similar to the famous symbol of playing cards. The legend says that the same Nicola Salvi positioned it there to prevent a local barber from seeing the progress of the work because he was annoyed by his constant criticism.

One of Rome’s famous Madonna nooks is right here in Trevi square and is located so low compared to many around the city that are perfectly visible. This is a legacy of Roman paganism that Christianity kept by replacing the old “Lares Compitales” with niches devoted to the Holy Mary disposed at the crossroads to protect wayfarers and travelers. Surrounded by angels and a garland, its author is anonymous because probably made by an unknown artisan like most of these religious niches. Apart from being an artistic ornament, this is a precious token of the local faith and tradition.

Practical Info + Tips for Your Visit

Where: Piazza di Trevi
How to reach: 5 min walk from Piazza Venezia or 15 min walk from Piazza del Popolo
Price: Free
Opening hours: Always open. Fontana di Trevi is always packed, more so in the highest season of the year, July and August. If you are not able to come to Rome during a quieter time, I suggest trying to visit the fountain early morning for some fantastic views and great natural light, or in the evening for the lovely lights the municipality spruced it up with.

Where to Eat near the Trevi Fountain

While there are plenty of eateries around, probably because it’s such a tourist area, not all are great. Our very favorite is the pizzeria/restaurant Piccolo Buco, but it’s so tiny and narrow that you really need to book beforehand otherwise your chance to get in is very dim. Even though we do have our favorite restaurants near Fontana di Trevi, if you find them all packed, I would suggest moving away towards Via del Corso to find a wider choice.

Where to Stay near the Trevi Fountain

If you want to stay in the city center, Trevi is a pretty exclusive area to book your hotel. You will find all types of accommodation, from 5-star hotels to more affordable B&Bs and guesthouses, but bear in mind that prices will be higher than in other areas in Rome. Here are some options: