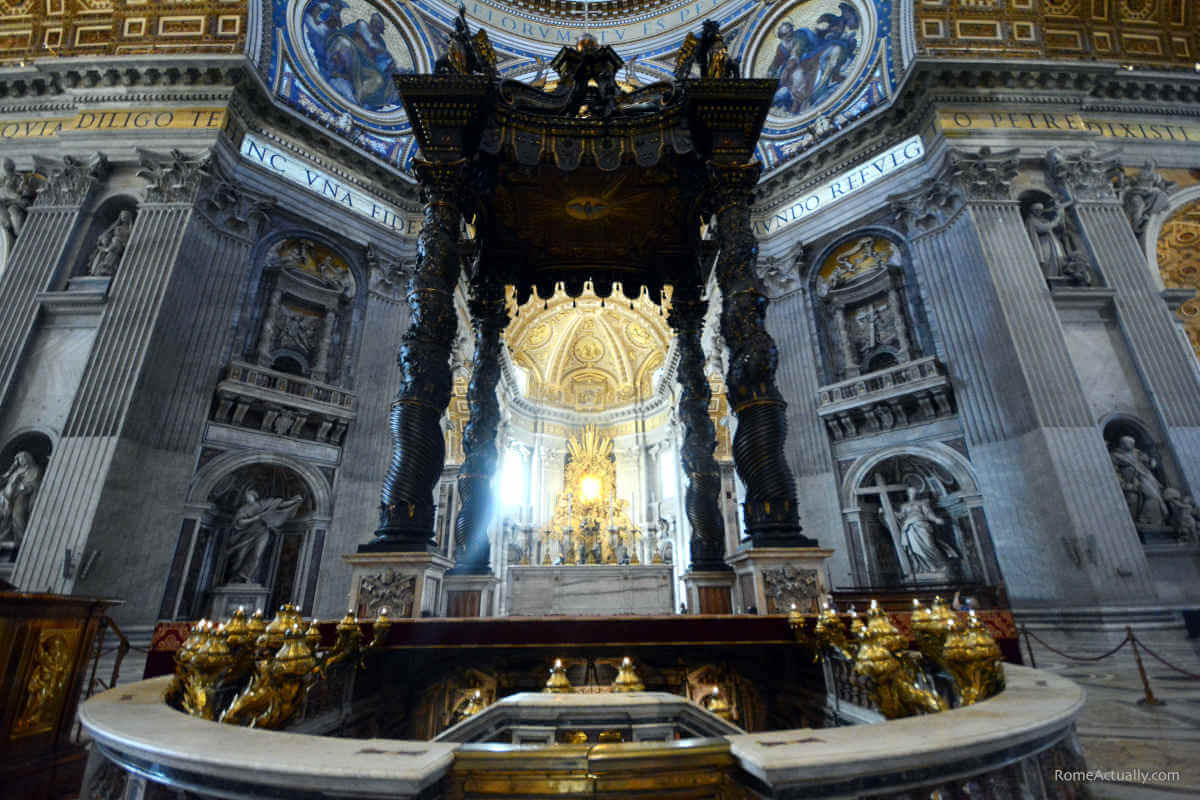 One of the most fascinating sights to visit in the Vatican is the Roman necropolis under St. Peter’s Basilica on top of which stands the modern Renaissance basilica and also part of St. Peter’s Square. The most common Vatican tours pretty much always include a visit to the Vatican Museums and a tour of the stunning St. Peter’s Basilica, some even getting down to the crypt where many popes are buried. However, for a tour of this ancient pre-Christian graveyard, you need to book via the Vatican website itself.

Our guide will tell you everything you need to know about this intriguing Vatican landmark that can be totally considered one of Rome’s top archaeological sites. We will do our best to provide all the information you need to decide whether or not this is a landmark of interest for you, what you need to know to book a tour and where you need to go to reach it.

Why visit the necropolis below Saint Peter’s Basilica

Only recently have I realized that not so many people know about the necropolis located under the Basilica of Saint Peter in the Vatican, despite the fact that it shows an incredibly interesting and fascinating piece of Roman history.

There are so many reasons why you should visit this ancient necropolis in the Vatican. This highlight of Vatican City gives a precious insight into ancient Roman history because you will understand where the Circus of Caligula, later called Nero’s Circus, was located and what it was built for, and you will see the remains of the ancient graveyard as well as the 4th-century Constantinian basilica.

On top of this of the necropolis below Saint Peter’s Basilica, during the tour, always led by a Vatican-certified archaeologist or historian, you will be able to appreciate and notice the passage from paganism to Christianity in Rome through the evolution of funerary mausoleums, funerary symbols, and funerary rituals.

Whether you are religious or not, you should visit this necropolis to see where the thousands of years of history and devotion to Christianity and Saint Peter Apostle began.

Are you looking for accommodation in the area? Check out our guide to the best hotels near the Vatican.

History of the Necropolis under St. Peter’s Basilica

Under what we know today of the Renaissance Saint Peter’s Basilica with all its mosaics, statues and masterpieces, are some layers of history that make it a fascinating underground trip. Built in what was known as Ager Vaticanus, the deeper step of our century-old journey is the circus emperor Caligula established in the Horti Agrippinae, the huge and luscious gardens he had inherited from his mother Agrippina.

Caligula’s circus was mainly used for public and private events and, later, under Nero’s rule, when it became Nero’s Circus, the space was used to execute the early Christians in a time where persecutions were common. According to some research, the apostle Peter was martyred here and crucified upside down.

The circus was built next to a pagan cemetery where wealthy Romans were buried and that later became an early-Christian cemetery some 11 meters below street level. Gradually, the circus stopped being used and as the cemetery expanded, the graves started invading the space of what once was Caligula’s stadium.

In the 4th century, Constantine the Great, the first Christian Roman emperor, decided to build a Basilica on top of theniche that was believed to enshrine and protect the tomb of Peter. The Renaissance Basilica stands on top of the 4ht-century one and is actually much smaller. From the grottoes below the modern church, where are the Popes’ tombs, it’s marked in many places the level of the floor of the Constantinian Basilica.

What You Will See in the Necropolis underSt. Peter’s Basilica

Initially, the old cemetery was the last resting place for Roman patricians so you are going to pass through monumental mausoleums usually including a larger chamber, sometimes with frescoes, carvings, jars, cubicles to host the different members of the family, the inscription at the entrance making it clear who they belonged to.

Sometimes, you can see the tombs of their slaves placed just beside the rich mausoleums as if to say that in the afterlife they would feast altogether. Some of the mausoleums featured also the small holes on the floor needed for the ablutions the relatives of the dead would do with sweet drinks to commemorate their deceased from the terrace on top of the mausoleum possible to reach via an internal staircase.

During your whole visit, always keep in mind that while you will be walking underground, in origin this was an open-air cemetery and you will be actually walking along a normal street of ancient Rome. From the beginning to the end of the tour, your expert, a Vatican-certified guide, usually, an archaeologist, will explain to you step by step the story linked to St. Peter’s tomb.

Before descending to the necropolis, your guide will show you a replica of the famous Gaius’ Trophy, the 2nd-century votive niche leaning on a red wall that Roman citizen Gaius made to protect what was believed to be the small tomb of Peter. From here, century after century several buildings were placed on top of this humble tomb to signify a continuous devotion and commemoration of the place where the first Christian Pope was martyred and buried.

The tour ends near the small chapel of the Constantinian memorial and your guide will show you where it’s now believed to be the box containing the actual bones and remains of Peter. While his tomb (the one inside Gaius’ Trophy) was never moved, in fact, his remains were.

During new excavations in the early 20th century, it was found that his tomb was actually empty and only a few decades later archaeologists found a small box containing human remains with a piece of the red wall of the Gaius’ Trophy bearing the inscription “Peter Eni”, “Peter is here”.

Following the analyses of the remains, they found that they were the bones of a 65-ish-year-old man and they couldn’t find foot bones. This was linked to the fact that Peter was crucified upside down and probably the feet were separated from the rest of the body.

The tour is extremely interesting whether you are religious or not because it takes you on a fantastic trip to ancient Rome, its society, and its burial rituals and shows you how the transition from paganism to Christianity happened at least concerning the cult of the dead.

How to Book Your Tour to St. Peter’s Basilica Necropolis

Sometimes, you can find tickets for the Vatican necropolis on reseller websites, but I think your best bet is to just book directly with the Ufficio Scavi (Vatican Excavations Office). They do require a few pieces of information but the booking process goes smooth and fast. I booked a week before but it was a quiet period, in general, I recommend emailing them a few weeks before your desired date.

The easiest way is to send an email to [email protected] with these details:

Where to go to enter the ancient necropolis?

Considering that you are facing the Basilica, the entrance is on the left side of the colonnade (south) in Via Paolo VI near the entrance to the General Audience Hall. Either from inside the colonnade or right outside, you will be able to access the police control and, from there, get to the entrance with the Swiss Guards.

Show the confirmation letter you have received upon booking to the Swiss Guards and they will direct you to the Excavations Office. Here, they will check your booking, the confirmed schedule, and they will assign you to your guide.

Here are my tips to best enjoy your visit and avoid all surprises.

What to see around the necropolis under St. Peter’s Basilica

Being in the Vatican, there are plenty of landmarks to visit in the immediate surroundings as well as after a short walk.

Make sure you read our easy guide to spending three perfect days in Rome.

Where to eat near the necropolis below Saint Peter’s Basilica

While I would stay clear from the tourist restaurants all around St. Peter’s Square, you don’t need to go too far to find nice food for decent prices.

WANT TO SAVE IT FOR LATER? PIN IT TO YOUR BOARD!