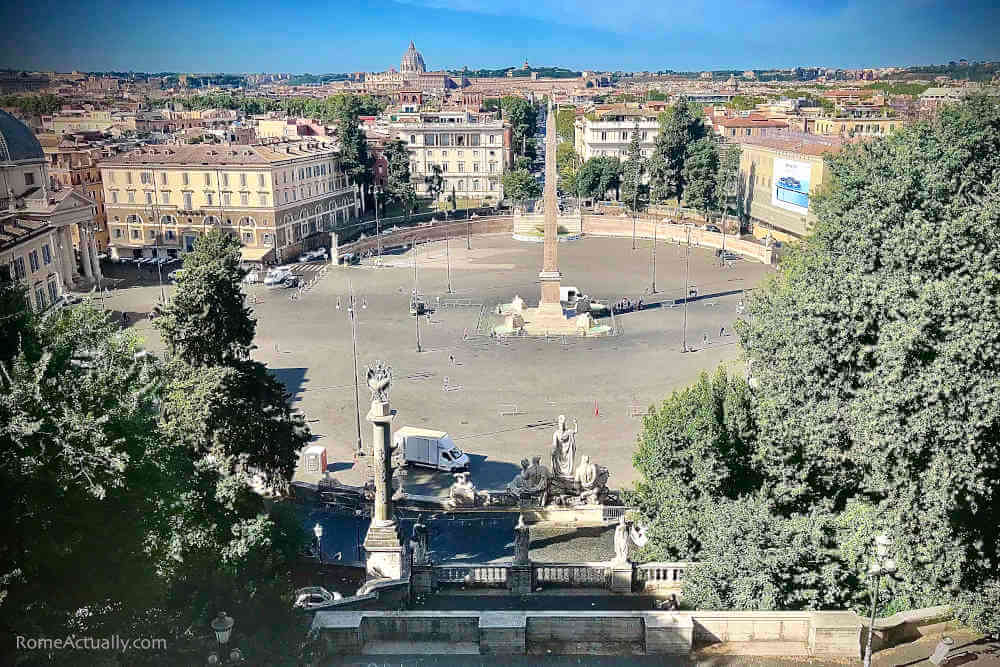 Can a square deserve a full guide to visiting it? When we are talking about Piazza del Popolo, possibly the world’s most glamorous entrance to a city’s historic center, it can. Boasting a long history and literally packed with landmarks, Rome’s Piazza del Popolo is one of those places that will take at least an hour to visit or even an hour and a half if you devote the right time to the different masterpieces that start right from the gate.

Thankfully, Piazza del Popolo is one of those squares that sooner or later you will cross, whether you are staying in Rome for four days or even only one day. Close to the metro, right at the feet of the Pincio terrace, one of Rome’s coolest viewpoints, giving access to the three shopping streets of the Tridente area, Piazza del Popolo is an unmissable central hub and historically one of the most important entrances to the city if you were coming from the north.

Our simple guide to Piazza del Popolo aims at making it easy for you to explore this landmark of Rome so that you don’t just cross through and miss important masterpieces that you will regret later.

The very origins of Piazza del Popolo are not so charming. This was a piece of land in the countryside next to the bustling heart of imperial Rome.

Located in the Campo Marzio area, the square started to be included in the built-up center around mid 16th century. It’s on this occasion that architect Giacomo della Porta placed the first fountain in its very center.

Piazza del Popolo as we know it begins to take shape between the 16th and the 17th centuries thanks to the contribution of great artists and the orders of a series of popes starting from Sixtus V and carrying on with Alexander VII.

We owe its current monumental look, however, to the complete revamping that took place at the beginning of the 19th century following a project by Italian architect Giuseppe Valadier with the help of French architect Berthault during the French occupation. This is when Piazza del Popolo is given its famous elliptical shape with two semi-circles on both sides, one at the foot of the Pincio Mount and one towards the Tiber.

Since around 1998, the whole area has been pedestrian.

Why is it called Piazza del Popolo?

There are a few theories on the origins of the name of Piazza del Popolo. According to some, its name originates from the fact that emperor Nero planted a field of poplar trees (pioppo in Italian, Populus in Latin). Another probably more plausible reason is that it was named after Santa Maria del Popolo Basilica when Pope Paschal II built the church funded, more or less willingly, by the people of Rome, in 1099.

What to see in Piazza del Popolo

Its ancient name was Porta Flaminia because it was the gate of the Aurelian Walls that, from the consular via Flaminia road, opened up to Rome’s Centro Storico. Today renamed Porta del Popolo, the imposing gate to Piazza del Popolo has a long history linked to important local families and leading artists.

Due to the importance of via Flaminia, it’s possible that this gate was built to manage the local traffic and movements. During the papacy of Sixtus IV, so around the 15th century, the Porta del Popolo gate was in a bad state of disrepair heavily damaged by negligence, time and, medieval sieges.

Its current look dates back to the 16th century: Pope Pius IV commissioned the external facade to Michelangelo but he declined the work and gave it to Nanni di Baccio Bigio who restored it between 1562 and 1565 clearly inspired by Titus Arch. The two pairs of columns framing the main entrance were transferred from the ancient St. Peter’s Basilica and the two statues of Saint Peter and Saint Paul placed between each of the pairs were made by Francesco Mochi and added in 1638.

The internal facade is one of the works of Bernini in Rome and was commissioned by Pope Alexander VII Chigi on the occasion of the arrival of Queen Christina of Sweden in 1655 after he converted to Christianity.

The Basilica of Santa Maria del Popolo itself enshrines a great wealth of masterpieces and collaboration of leading artists. One of the highest examples of Roman Renaissance buildings, inside the basilica you should look for the artwork often preserved in several chapels.

Cerasi Chapel near the altar displays two paintings of Caravaggio commissioned by Tiberio Cerasi in 1600, while Cappella della Rovere, is worth a visit for the beautiful frescoes by Pinturicchio.

The beautiful and most important chapel is Cappella Chigi which wealthy banker Agostino Chigi commissioned for Raphael in 1513. The chapel was completed by Bernini between 1652 and 1656 upon commission by Pope Alexander VII Chigi.

Right next to the Basilica of Santa Maria del Popolo is the Leonardo Da Vinci Museum to celebrate and show the talent of Italian Renaissance genius, inventor, scientist, engineer, architect, and all-around artist.

With a variety of interactive machines and multimedia installations, this fantastic museum is a favorite among children and adults. The rooms, videos, and interactive learning devices will take you on a journey to discover Da Vinci’s works including anatomy sketches, the making of The Last Supper and The Vitruvian Man, as well as take a step back in time and feel what his life was like.

Fountain of the Lions

The largest and most famous fountain is located in the center of the square and is known as the Fountain of the Lions. Made by Giuseppe Valadier, originally, its water was supplied by the Aqua Virgo ancient aqueduct.

The Fountain of the Lions replaced a 16th-century fountain by Giacomo della Porta (now in Piazza Nicosia) and is organized all around the giant obelisk. The base of the fountain is a staircase that features large round basins on the four corners. On each corner is a squared pyramidal staircase with a white marble lion on top gushing out large fans of water.

Fountain of the Goddess Roma

The beautiful Fontana della Dea Roma was made by Giovanni Ceccarini following a design by Giuseppe Valadier. It was placed in the eastern hemicycle at the foot of the Pincio Mount in Villa Borghese and represents the goddess symbol of the city of Rome with the statues of the two Roman rivers Tiber and Aniene on each side.

Wearing a helmet and holding a spear, the goddess of this monumental fountain in Piazza del Popolo looks like a true warrior. At her feet is one of the most popular symbols of Rome, the she-wolf breastfeeding Romulus and Remus to celebrate the mythological origins of the city. As if to support the important sculpture group, at the bottom is a large travertine basin inside which is a smaller shell-shaped basin that collects the water gushing out from another smaller basin.

Fountain of the Neptune

Facing the Roma goddess, on the western hemicycle of Piazza del Popolo, is the beautiful Fontana del Nettuno that, just like the other one, was designed by Valadier and realized by Ceccarini.

Pretty similar to the other fountain, also this one consists of a large travertine basin at the bottom with a shell-shaped basin on top that collects the water from a smaller tank. The marble sculpture surmounting the fountain is formed by a giant Neptune holding the trident in his right hand and with two tritons laying on dolphins at his feet.

The obelisk of Piazza del Popolo

The first Egyptian obelisk to have been brought to Rome from Egypt, Obelisco Flaminio was moved to Piazza del Popolo from the Circus Maximus in 1589 by Pope Sixtus V. After being shown as a symbol of pride and prestige together with other Egyptian obelisks, the Flaminio obelisk was confined to the scrap heap of history for centuries.

Carved around 1300 BC out of a monolith of red granite, this ancient obelisk measures almost 26 meters (85 feet). The fine decoration with hieroglyphics on all its sides was ordered by the pharaohs Seti I and Ramses II.

The two churches on the sides at the entrance to Via del Corso look identical but they are not. Just like the two mirroring fountains on each side of the square, these churches, too, add to the architectural synching Valadier aimed at. The churches are Santa Maria dei Miracoli and Santa Maria in Montesanto, also known as “Chiesa degli Artisti” (artists’ church). They were both built by Gian Lorenzo Bernini and Carlo Fontana following a project by Carlo Rainaldi.

Even though at first, hasty sight, they look the same, by paying attention we can notice that this is mainly an optical illusion. Standing in front of them, we can see that their cupola (dome) is different, as well as their bell tower. From inside, we can see the also the layouts are not the same. This depends on the very beginning of the construction commissioned by Pope Alexander VII to Rainaldi.

The pontiff’s idea was to give awe-inspiring access to the historic center and make it impossible to privates to build their homes around the square. But soon Rainaldi had to come to terms with the limited space and this is what determined the difference in both the planimetry and the domes.

The view from the Pincio terrace

One of the most famous panoramic viewpoints in Rome is from the Pincio terrace right on Piazza del Popolo. From there, you can admire the square in all its majestic and fully comprehend why it’s so famous and what makes it one of the most beautiful piazzas in Rome.

Where to eat near Piazza del Popolo

Being the city center, I always recommend checking where to eat and not trusting all the tourist menus that try to lure you in. Here are some good restaurants around Piazza del Popolo and the city center.

Make sure you read our article on the most beautiful and historic bridges in Rome.

What to see and do near Piazza del Popolo

Being in the very city center, there are plenty of things to see and do around Piazza del Popolo. Here are some suggestions.

Make sure you read our handy article on how to spend one perfect day in Rome’s city center.

Where to stay near Piazza del Popolo

Definitely the most glamorous area to book a hotel in Rome, in the city center there is a diverse range of accommodation options.