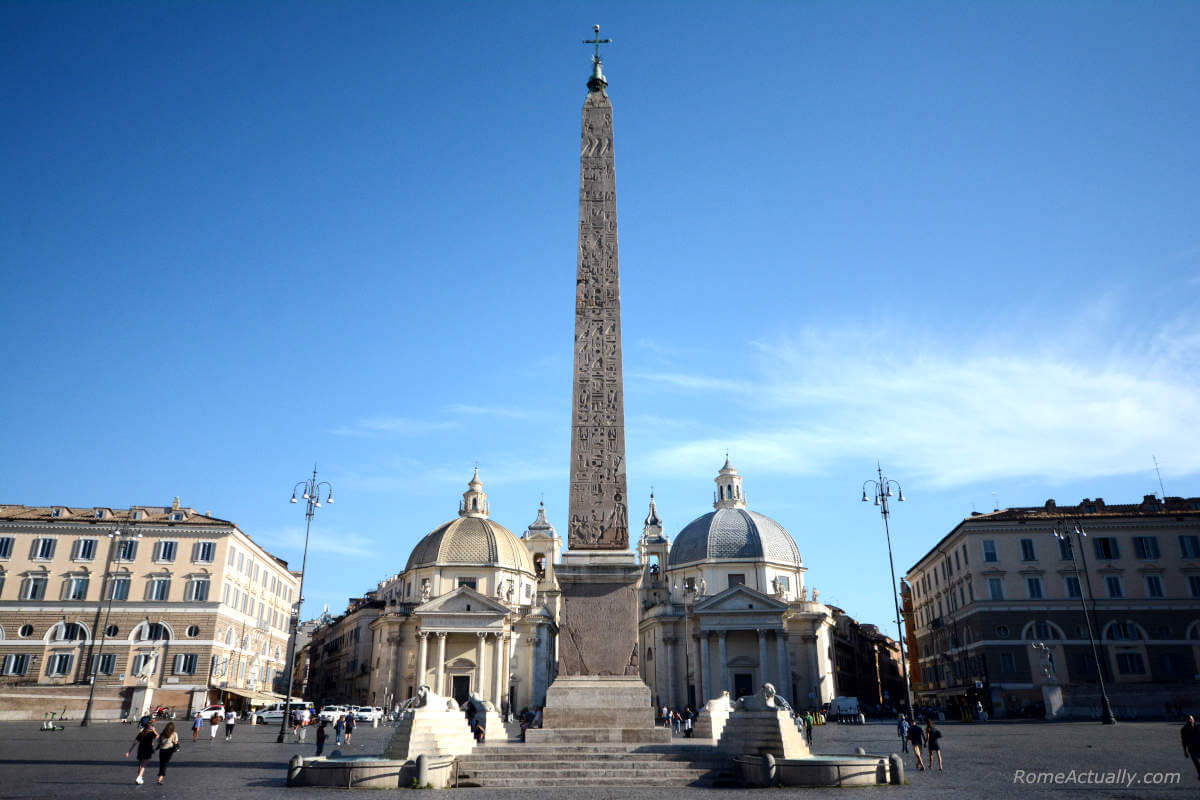 Let’s say you are on a short trip to Italy or on a quick city break and are spending only one day in Rome. Whether you have already been to the city or not, chances are that with so little time, you want to spend one day in Rome’s historic center.

There are many itineraries you can follow in Rome, themed or location-based ones, but here we want to make things super easy for you and just guide you through important landmarks, beautiful views, the best photography spots for perfect postcard pictures, and also fantastic suggestions to have ALL the meals of the day, including breakfast and gelato!

Breakfast in style at Coromandel

Coromandel is hands-down one of our very favorite breakfasts in Rome city center. If you are staying only one day in Rome, very likely you have booked your hotel in Rome city center, so here is where you will have your breakfast. If you are reading this before choosing your hotel and don’t mind going out before your morning coffee, you can easily pick an accommodation that doesn’t provide breakfast and enjoy a luxury first meal of the day here.

Sweet and savory pancakes, bagels, scrambled eggs, cakes, pastries, all types of coffees and soft drinks, Coromandel can make even the most demanding palates happy. They serve breakfast, brunch and also a light lunch, in case you do want to try it out but at another time of the day. Either way, highly recommended!

A very short walk from Coromandel is Piazza Navona, so it’s likely going to be your first stop if you are staying only one day in Rome’s historic center. If you are staying one or two days in Rome, I suggest you head directly to the main landmarks of the historic center, but if you can enjoy a longer vacation, you probably want to quickly duck into also the lovely Santa Maria della Pace church that stands literally one minute from Coromandel restaurant. Part of this church is the famous Chiostro del Bramante (Bramante’s Cloister) where they hold always different and interesting temporary exhibitions.

But as we said, Piazza Navona is the star of the show. One of Rome’s most beautiful squares, here you can view the Four Rivers Fountain by Bernini, Borromini’s Sant’Agnese in Agone Church, Fontana del Moro, and the Fountain of the Neptune, one at each end of the square. And if it’s open, I suggest you also visit the Domitian Stadium, the ancient stadium on top of which the oval-shaped Piazza Navona was built.

On your way to our second suggested big landmark (the Pantheon), right after crossing Corso Rinascimento on your left, you will find Saint Louis of the French church. I suggest you also make a quick stop here for a reason: there are three famous Caravaggio paintings in Rome you’ll just want to see. They are displayed in the Contarelli chapel and are The Calling of St. Matthew, The Inspiration of St. Matthew and The Martyrdom of St. Matthew.

Duck into the Pantheon

3 minutes from Saint Louis of the French Church

Once you are done with Piazza Navona, continue to explore Rome Centro Storico and make your way to the Pantheon. Possibly the best-kept temple of ancient Rome, this was devoted to all gods. Standing in front of the beautiful Piazza della Rotonda with the fountain by Giacomo della Porta and the Egyptian obelisk.

Built as a pagan temple in 126 AD, it is now a Catholic church where a few members of the former Italian royal family and the painter Raphael are buried. Famous for featuring one of the biggest domes of the ancient world, the Pantheon has a large hole on the ceiling (oculus) from where on May 1st they pour rose petals inside the church.

If you had breakfast at Coromandel how I suggested, you are unlikely to be hungry by now. But in case you are, around the Pantheon are some of the best restaurants in Rome, including Armando Al Pantheon (previous booking is essential), La Rosetta fish restaurant, or Ginger Sapori & Salute in Piazza Sant’Eustachio. However, if you can wait, just head over to your next stop, Largo Argentina!

However, if by the time you are visiting the Pantheon are not exactly hungry but feeling a little appetite, head to the nearby Piazza Sant’Eustachio 47 and enjoy a delicious artisan gelato at Punto Gelato of Gunther Gelato Italiano, one of the best gelaterias in Rome.

8 minutes from the Pantheon

This gorgeous Baroque fountain, the most beautiful and largest in Rome, is a must in your one-day itinerary in Rome city center, especially if it’s your first trip. While the initial project was commissioned to Gian Lorenzo Bernini in 1629, the Trevi Fountain was finally built following a project by Italian architect Nicola Salvi because in the meantime Pope Urban VIII died and the original project was halted. The work began in 1732 and ended in 1762.

Made of travertine stone, the fountain is 26 meters high and almost 50 meters wide, and is located at the end of the Aqua Virgo aqueduct that supplied water to Ancient Rome for more than 400 years.

2 minutes from the Trevi Fountain

Hungry yet? Very close to the Trevi Fountain is Piccolo Buco, a tiny restaurant that serves one of the best pizza in Rome. This is originally a pizza place but serves also other dishes of the Roman tradition such as spaghetti amatriciana, cacio e pepe tonnarelli, beefsteak, and lamb chops. Whatever you want to order will be good, but if you ask me, the pizza is really outstanding. I had a delicious Margherita with yellow tomatoes and my husband a great 4 Formaggi (4 cheese).

Do Some Good Shopping in Via del Corso

7 minutes from the Trevi Fountain

Just because you are staying only one day in Rome’s historic center, it doesn’t mean you can’t go shopping. Via del Corso is the best starting point. First of all, because there are many shops for clothes, shoes, accessories, perfumes, and more, and also because all the nearby streets like Via Margutta, Via del Babuino, Via Borgognona and Via dei Condotti feature some of the most luxurious stores in Rome from upscale famous brands.

7 minutes from Via del Corso via Via della Vite, Via Borgognona or Via Frattina

After Rome’s most famous fountain, you should make your way to Rome’s most famous staircase, the Spanish Steps. One of the recent bills from the municipality banned sitting on the stairs so you can see the architectural wonder in all its beauty and also climb it to reach the beautiful Trinità dei Monti church.

Among the other things to see and do in and around the Spanish Steps are Fontana della Barcaccia fountain by Pietro Bernini (the father of the more famous Gian Lorenzo), Keats-Shelley Memorial House and sipping tea at historic Babington’s. If you didn’t have your ice cream in the morning or you want to double your gelato intake in the afternoon, try the daring and delicious combinations of Fatamorgana in Via Laurina 10 on your way to Piazza del Popolo.

8 minutes from the Spanish Steps

Located on the northern end of Via del Corso, the large Piazza del Popolo (People’s Square) is where Via del Babuino, Via del Corso and Via di Ripetta, the main three roads of the Tridente are, meet. Located at the feet of the Pincio Terrace of Villa Borghese, Piazza del Popolo is huge and spectacular, a must-see in one day in Rome’s historic center. Among its highlights are the Fountain of the Lions with an Egyptian obelisk in the middle, two fountains facing each other on the opposite sides of the square, the art-packed Santa Maria del Popolo Basilica, and the twin churches of Santa Maria in Montesanto and Santa Maria dei Miracoli.

Make sure you read our article on the most beautiful fountains in Rome.

End Your Day In Style With A Vegetarian Dinner

What’s a better way to round off your long but rewarding day sightseeing in Rome’s historic center other than with a delicious dinner? Whether you are a carnivore or have a vegan diet, I bet you will enjoy the Margutta RistorArte in the exclusive location of Via Margutta, one of the very best vegetarian restaurants in Rome.

Open since 1979, the Margutta restaurant has established itself as one of the leading eateries in the field way before so many Italians started embracing the vegetarian and vegan diet. On the menu, most dishes contemplate also the vegan option, if they aren’t originally vegan already.

More time in Rome? Check out these other places!

Are you staying longer in Rome or do you feel like straying from the strict historic center? Have you already seen or are not interested in some of the places suggested in the itinerary? Check out these other places that are not too far or difficult to reach to draw your own journey and if you need help with your planning, don’t miss our 4-day Rome itinerary.