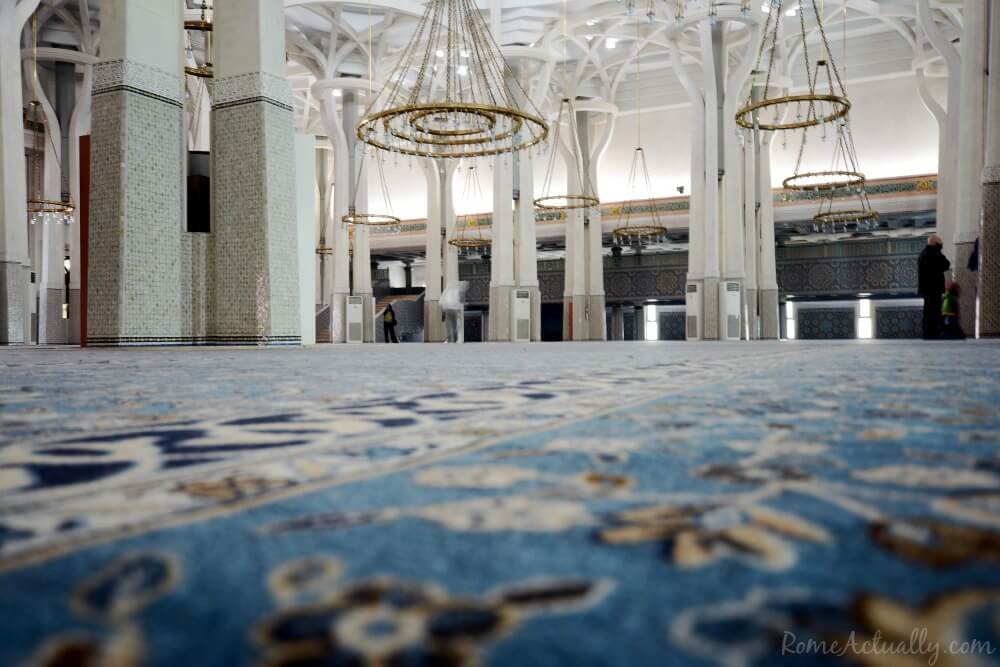 Designed by Italian architect Paolo Portoghesi with the collaboration of Iraqi architect Sami Mousawi and Italian engineer Gigliotti, Rome’s grand mosque is located in the exclusive Parioli neighborhood and is reportedly one of the largest (if not the largest) in Europe.

History of the Grand Mosque of Rome

Mutual talks about the project started in the early 1970s between Italy and Saudi Arabia, with Rome’s Council chipping in with a donation of a 30,000-square-meter land at the foot of Monte Parioli near the Tiber river and Villa Ada, one of the city’s most beautiful parks.

Funded by several donors, including the Saudi King Faisal and Prince Muhammad Hasan of Afghanistan in exile in Rome with his wife Princess Razia, construction works of Rome’s grand mosque kicked off in 1984 and in 1995 it officially started its activities as the Italia Islamic Cultural Center.

At the time of construction, a logistic issue arose: the height of the minarets. There was no way the Pope was going to accept it being taller than St. Peter’s dome. So finally, the issue was resolved by making the minarets shorter that St. Peter’s cupola.

The main geometric patterns used by the architects are squares and circles, with the first symbolizing the earth and mankind, and the latter standing for the sky and the divine. The constant interplay of these two motifs represents the eternal struggle of men to reach the transcendent.

The mosque’s seventeen domes are made by 7 concentric circles representing the 7 heavens mentioned in the Quran, and the 16 smaller domes around the biggest one in the middle suggest the sky’s cosmic image. From different angles, shapes of windows, and positions, the lights create a mystic effect.

While Rome’s grand mosque doesn’t look like the worship places I have visited in Muslim countries around the world, it does feature some of the elements that reminded me of them. Such as the geometric patterns you can see in the photo below. I have seen similar patterns in the mosques in Iran and Afghanistan, so from a Persian artistic background. Those in Iran (especially Yazd Grand Mosque) and Afghanistan (in the beautiful grand mosque in Herat city), however, feature much more sophisticated decorations of fine mosaics, tilework, and paintings.

Like all mosques, also the floor of Rome’s grand mosque is covered with carpet. The rug of the grand mosque of Rome is blue and features a creamy and black flowery pattern.

One of the most important features is the mehrab, the niche pointing towards Mecca and from where the Imam does the prayer.

The mosque interior features sets of white tri-stemmed pillars to give the idea of a forest. Nature has always an important meaning in Islam and largely used in Persian art and architecture because it refers to the sacred idea of Heaven.

With a capacity of some 12.000 people, as soon as you enter, the first thing you’ll notice is the mix between contemporary Western architecture and traditional Islamic elements including the Ottoman and the Persian styles. Before accessing the mosque, you will pass through an arcaded courtyard, feature that I have seen also in Iranian mosques.

While you are going to see beautiful decorative patterns and colors, you won’t find any picture or images of either humans or animals because this is forbidden in Islam. The decorations show flowers and natural elements as well as calligraphy and verses from the Quran.

Like in every Islamic worship place, also in the grand mosque of Rome women have their own specific area for praying. In this specific mosque, you will access it via a large staircase.

Rome’s grand mosque is an important landmarks for Muslims in Rome and Italy. This is where they perform the important Friday prayer, but also where they celebrate important rituals, conversions, Islamic weddings (niqah) as well as funerals.

Where It Is and How to Reach Rome’s Grand Mosque