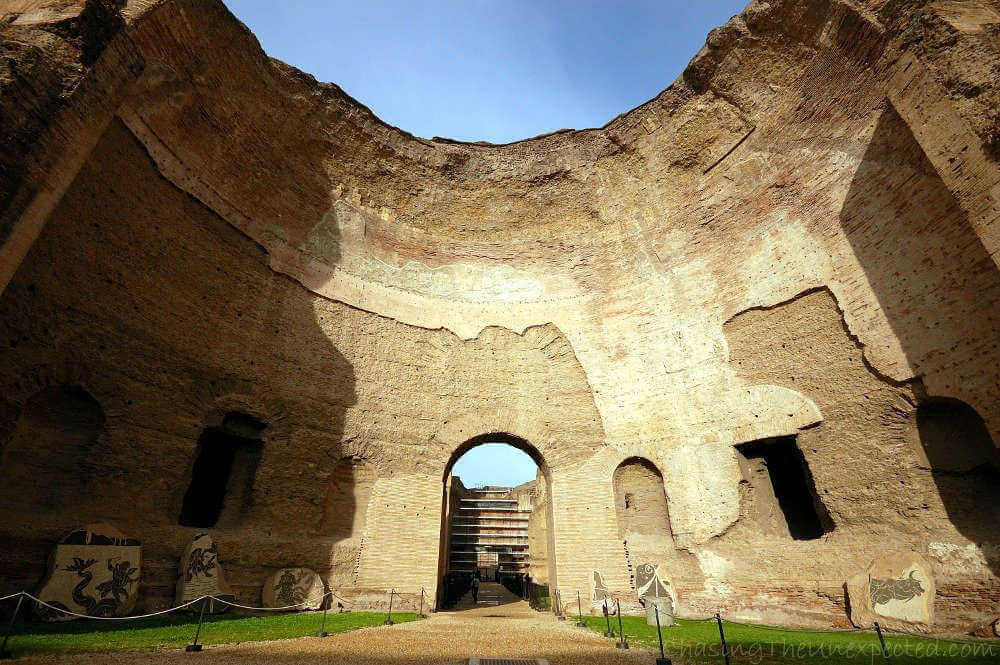 For anyone traveling to Rome for the first time, visiting the Colosseum is a must. But how many stray a bit further south towards the Circus Maximus to visit the wonderful Baths of Caracalla? Even though not really a hidden gem in Rome, this is one of the thousand-year-old attractions and one of Rome’s best archaeological sites where you will find virtually no queue.

Also called Thermae of Caracalla, these Roman baths were built by emperor Caracalla to show off in architecture, style, and luxury, and to allow the citizens to enjoy the public spa that nowadays in summer becomes the scenic backdrop for the Opera plays. The 90-foot-tall thermal bath complex had a capacity of around 6,000 enthusiast spa-goers at a time, functioning also as a social hangout, and discovering the labor behind its operations and its fantastic architecture and decorations is one of the top experiences to have in Rome.

Baths of Caracalla in Rome: What to See and Why Visit

What to see in the Caracalla Baths

Gone down in history as Thermae Antoninianae, the Baths of Caracalla were commissioned by Caracalla in 212 AD. It took 5 years and 9,000 workers to build what now is one of the biggest and best-preserved thermal baths of ancient Rome. Inaugurated in 216 AD, the thermal spa was operative until 537, when Gothic King Vitige severed the aqueduct to conquer the city by thirst.

Despite being close to the Colosseum, there is never a line of tourists standing in front of the entrance to the Baths of Caracalla, and it’s a pity since inside you can visit the ruins of what were truly majestic public baths comprehensive of several bathing halls, gym, library and open-air gardens giving Romans a great opportunity for bathing, relaxing, and exercising.

The original baths were finely decorated with hundreds of statues, paintings, and mosaics. Unfortunately, several pieces of the local artwork were looted and removed from their original context. Today, at the Museo Nazionale of Naples you can find some sculptures from the Baths, in Piazza Santa Trinità in Florence there is a huge column from the natatio (a pool that apparently was of Olympic size), while in Piazza Farnese, behind Campo de’ Fiori, you can see two grey granite basins from the original frigidarium now employed as fountains.

A typical spa day in the Baths of Caracalla started at the gym, followed by a sauna session. Now, the experience would continue with the actual spa treatment route that consisted of the calidarium, a warm room heated by an efficient heating system of hot air under the floor, the tepidarium to start bringing the body’s temperatures down, and the frigidarium, the cooler room with cold water pools and a play of waterfalls. This hall, the frigidarium, was similar to the structure of a basilica and was a source of inspiration for many buildings afterward, such as the Baths of Diocletian, now where is the Museo Nazionale Romano, and the Basilica of Maxentius inside the Roman Forum.

Even though there are plates in the different sections describing where you are and what you are seeing at that moment, visiting the Baths of Caracalla with an expert guide inevitably adds value to your experience. An archaeologist, historian or expert local tour leader will be able to spruce up your visit with stories of daily life from imperial times, with in-depth descriptions of how these amazing thermal baths used to look back in their time of biggest splendor, how citizens used to enjoy their spa time and more.

There are several tours to the Baths of Caracalla you can book in Rome, they take no more than an hour and a half but it will be a fascinating adventure in one of the most underrated thousand-year-old landmarks in the city. You can book a tour to the Caracalla Baths only led by an archaeologist with the entrance fee included or a tour that includes the Baths of Caracalla and the Circus Maximus, the other nearby ancient Roman landmark that many forget to visit and hardly know what used to happen.

Make sure you read our post on the most famous and impressive buildings in Rome.

Reasons to visit the Baths of Caracalla in Rome

The complex of the Baths of Caracalla is huge and so well preserved that it’s easy to imagine how they were in their heyday and picture sauna lovers debating, sweating and sprucing themselves up. Apart from the wide gardens, there are also big chunks of the original mosaic floor, columns, and the figures and statues used as decorations, different areas each with their own purposes, such as the gym, changing rooms, shops, libraries and pools.

With your guide, you will walk in the footsteps of 3rd-century Romans and be amazed at the huge walls, large rooms and different sections of this monumental thermal complex, and marvel at the impressive architecture and engineering skills that made ancient Rome a wonderful capital for thousands of years ago. Once you are done on the street-level floor, you can descend underground to discover how these public baths worked and what the local slaves used to do in order for the complex to be always up and running and provide both warm and cool environments.

If you are staying 3 days in Rome at the least, I totally suggest you try your best to squeeze the Caracalla Baths into your bucket list.