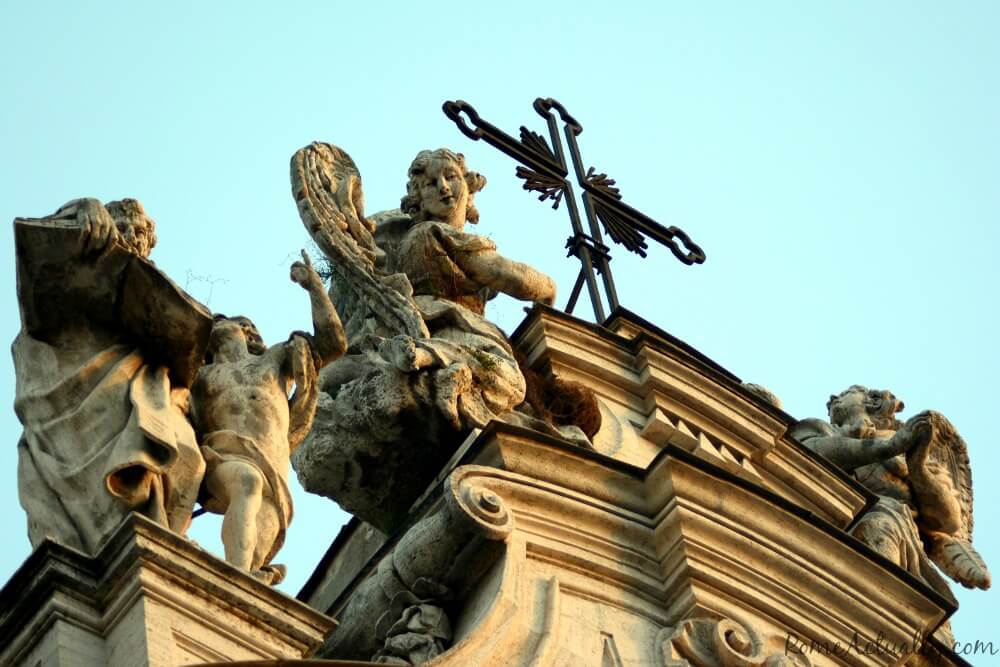 Part of the ancient pilgrimage route of the Seven Churches started by San Filippo Neri, the Basilica of the Holy Cross in Jerusalem,very much cherished by the Knights Templar, is located in the Esquilino neighborhood between San Giovanni in Laterano Basilica and Porta Maggiore, and despite its impressive architecture is still one of the lesser-visited churches in Rome.

Almost leaning on the legendary Aurelian Walls, the basilica’s name means right what it says, that it has been keeping a reliquary of pieces from the Holy Cross found in Jerusalem’s Golgotha since the 4th century. It is believed that it was Helena herself who found the sacred relics of Christ’s passion and later brought them to Rome.

While it might not be the first landmark you are going to visit if you are staying in Rome for only one day, if you stay longer, it’s definitely worth a stop, even if only for half an hour.

In my perpetual quest for hidden gems in Rome, I ended up in this church that holds a high artistic and historical value for the Italian and Catholic tradition.

Santa Croce in Gerusalemme basilica underwent repeated renovation endeavors, and from an early-Christian church it was remodeled into a Romanesque-style building in the 12th century during the reign of Pope Lucius II, to finally obtain the late-Baroque look it has today, the result of the work of architects Pietro Passalacqua and Domenico Gregorini, commissioned by Pope Benedict XIV in the 18th century.Its origins, however, are much more ancient and date back to the 3rd and 4th centuries, when the Esquilino was a suburban area.

On the site where now is the Santa Croce in Gerusalemme Basilica used to be an imperial complex known as “Horti Variani ad Spem Veterem” started by the emperor Septimius Severus and that included the Sessorium palace, the thermal baths of Helena, the mother of the emperor Constantine, the Variano Circus, and Castrense Amphitheater. It was inside the palace that the first church was built around 320 BCE and throughout the centuries several religious orders took over running the complex, including the Benedictine monks and the Cistercians.

What to see in Rome’s Basilica of the Holy Cross

Even though the most important and famous relics preserved here are pieces of the cross, there are also other sacred objects kept in this reliquary, including the Titulus Crucis, namely the inscription on the cross, a nail, two thorns believed to have belonged to the crown put on Jesus’ head, Saint Thomas’ finger, and a piece of the cross of the Penitent Thief.

If the interior looks simple when compared to other churches, especially those built in Baroque style, Santa Croce in Gerusalemme Basilica enshrines some beautiful artwork. One of the first things to notice when you enter is the inlay stonework Cosmatesque floor, the original Roman pillars, and more sacred relics, those of San Cesario and Sant’Anastasio.

On the apsis, you will find a fresco by artist Antoniazzo Romano depicting a blessing Jesus surrounded by angels, and on top of a sequence of stories set in Jerusalem of the fragments of the cross were found.

Worth seeing are also the chapels, Saint Helena’s one, decorated with a rich mosaic, and Saint Gregory’s displaying a 17th-century sculpture. According to tradition, under the pavement of Saint Helena’s chapel was kept the dirt brought from Jerusalem.

What to see around Santa Croce in Gerusalemme Basilica